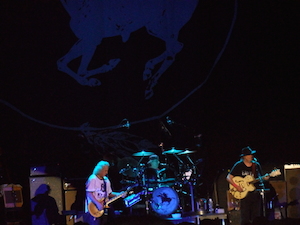 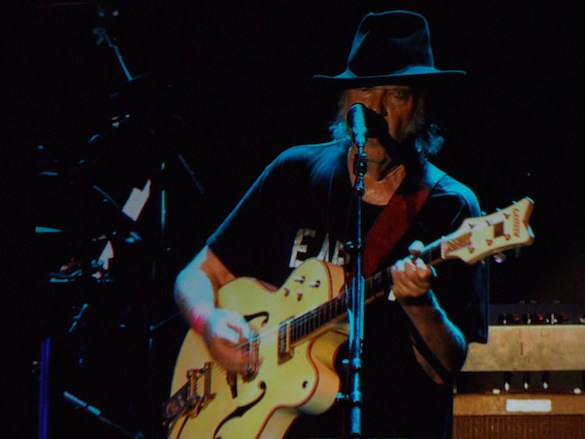 It’s not every day, or year even, that Neil Young plays Liverpool. In fact this is only the second time in forty years so here’s our second review of this concert, this one by Kevin A. Steen who also took the photographs.

Neil Young and Crazy Horse were arriving in Liverpool for the rescheduled date that was axed from last year’s tour following an accident in which Crazy Horse guitarist, Frank ‘Poncho’ Sampedro broke his hand. The city is buzzing with activity in anticipation for this show, sandwiched back in for disappointed fans, immediately after the British Summertime headline slot at Hyde Park last night.

Like the raw, edgy feedback from the grungy electric guitars we came here to see, thousands of strong scouse accents were generating pure white noise from all the cackling of excitement murmuring all around the docks. People were basking outside on this sunny Sunday afternoon, filling bars and multi-storey car parks across the city. The atmosphere is already charged, hours before the Arena doors open. 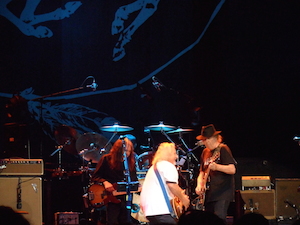 The man who has indulged every role from godfather of grunge to pioneer of the electric car, Neil Young the 68-year-old is back in Britain for yet another unforgettable gig with Crazy Horse. It may’ve been clashing with the World cup final but still the venue is packed, showing what a draw Neil Young truly is.

Moving through the crowd to the front before the band take to the stage, pockets of the crowd are watching the football on mobile phones and tablets. What an age we live in, where so-called fans can annoy real music fans with mobile phones on display distracting from the main event that thousands have paid £50+ a ticket to witness.

Pleasingly these devices are put away as soon as the band enter stage right. It was a very understated entrance from the band having witnessed their theatrics in the past.

The guitars begin to chime for the opening track ‘Love And Only Love’ a complete gunslinging mash up with Young and Poncho staring each other down with six-barrelled guitars firing away for five minutes until Young drives at the mic to begin belting out the opening lines.

Swaggering over to the Indian cask at the right of the stage, Young is seen to have a bizarre conversation with this wooden carved cask embodying the spirit of the crazy horse. There’s the theatrical edge I expected.

The next two tracks are delivered powerfully, with Young’s voice still very much on top of its game, unlike many of his contemporaries of the day.

This is a Crazy Horse show so many fans are not aware that it won’t be a greatest hits set. With only a handful of headbangers and moshers noticed until the 4th track of the set ‘After The Gold Rush’ brought the crowd together for the first time in the set, commencing the mass sing-a-longs.

Young’s songwriting throughout the years have left him with few peers and certainly no one else has his longevity.

He has earned the right to do what he wants. As had Bob Dylan who I saw in this very arena a few years back, a performance which left me dreaming of seeing him in his prime rather than seeing the below par performance the man now well into his seventies produced that night. But I excused that. It was Bob Dylan, he can do what he wants.

Young pays homage to Dylan’s songwriting, stating “…this is the greatest song ever written and it is still very relevant today” before belting out Blowin’ In The Wind followed by ‘Heart Of Gold’ the highlight for the sing-a-longs of the night. With the entire arena providing immense backing vocals to every word of both songs.

“Thank you Liverpool. Around the world Liverpool is famous for its hard-working people…” inevitably he is interrupted by several heckles after saying that.

On form with these “I can’t hear you I got O.C.D.D. you know, It drowns you out” and “Don’t tell me your problems I have enough of my own.”

Delivered with the snarling venom that few other performers can muster.

This biblical, bewildering, barmy, brilliant gig finds Young at his most erratic best, playing roles from electric stormbringer, to acoustic balladeer as he lashes out guitar solos that, combined with his voice, which is unusually pretty and youthful, and the interplay between men who have played together for decades, is humbling to witness. They rip their own songs apart inside out and re-invent and rebuild them.

The bird organ descends from the rafters for ‘Rockin’ in the Free World’ which brings the house down. A set that takes 130 minutes to get through 14 songs is expressively indulgent. He goes off for close to ten minutes now before re-emerging for a single song encore of ‘Like a Hurricane.’ Even the false endings are compelling.

Young is comical to watch with the look of a misbehaving grandad, ending the song by grinning and tearing the strings from his own guitar. The pleasure of destruction to close the show and it see us off into the night and for the hour long parking jams in the multi-storey car park still with singing from our hearts .

The set tonight was as followed.

You can find the other Neil Young review we ran here.

All words and photos by Kevin A. Steen. Kevin’s Louder Than War archive can be found here.