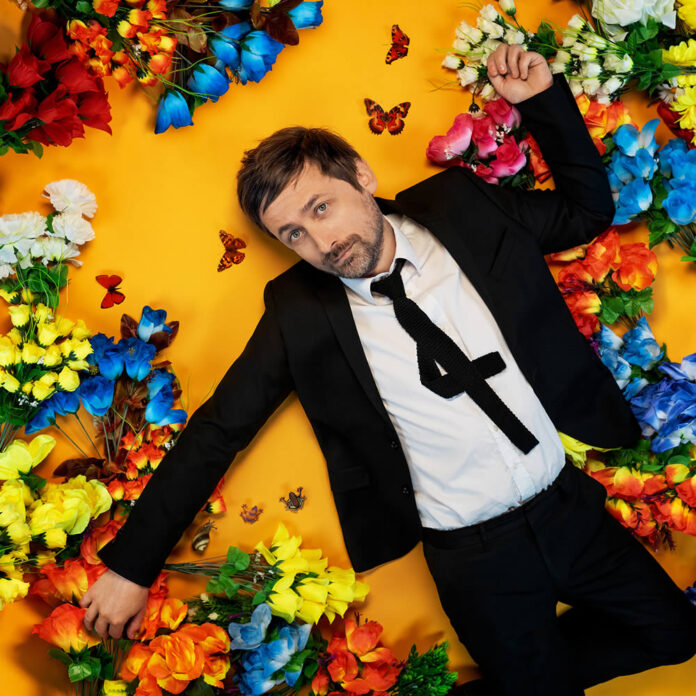 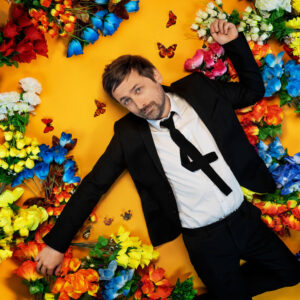 Released on 4th Feb, Charmed Life is the ‘Best Of’ album from The Divine Comedy, the alter ego of Northern Irish singer songwriter Neil Hannon. Here in an exclusive piece for Louder Than War, Henry Tydeman, one half of sibling duo Barbara, who are supporting Neil on a slew of UK dates from Birmingham to London this Spring, shows his appreciation of the man and his music!

It is the duty of every right-thinking music fan to believe wholeheartedly that the bands and artists of their youth were the best there have ever been, and that everything since has been simply pale imitation. In keeping with this spirit I maintain that the last era of great British bands was the 1990s; Blur, Suede, Pulp and in their own way Oasis all seemed to have things to say, and they did so again and again via unforgettable, yelled chorus lines, drenched in thick, oozing guitars. The songs were so big and seemingly bold, they inspired confidence – even when there was irony and doubt in the lyrics – and moved people to an extent that I don’t think has been replicated subsequently. (This was, of course, the last pre-internet age, before the inevitable diluting effect of YouTube, Netflix and Spotify on ‘mass’ culture.)

But in spite of my connection to and affection for these bands, there’s no doubt that the music has aged. I suppose it shouldn’t be a surprise – after all, we’re talking about popular music, and that adjective implies a sort of fleetingness. Looking back, perhaps there was actually too much of that guitar, perhaps there was an earnestness about some of the words that was a bit silly. Perhaps I’m just getting old. No doubt some will accuse me of sacrilege. But I don’t think it’s particularly controversial to say that it was, broadly speaking, of its time. For whatever reason, those bands fitted the moment perfectly and delighted an entire generation, but although the warmth of nostalgia always has its appeal, the music of the 1990s which was once so very new, so invigorating, now seems sort of… well, old-fashioned.

At least, most of it does. But the same cannot be said, I submit, of The Divine Comedy and the songs of Neil Hannon. The band rose during that heady decade alongside those already mentioned, and yet have always been somehow separate, riding on different tracks. Never infected by the puerile laddishness that defined the era’s least impressive moments, never overly serious (though always thoughtful), never coarse or indulgent. In fact, Hannon’s songwriting didn’t really fit the template of the time at all, and indeed has never fitted the template of any time since (there have been twelve Divine Comedy albums in all, their releases neatly spaced out down the years like a precise staccato played on the strings, the type of accompaniment Hannon himself often favours).

What appeals to me, and marks Hannon out as different from a certain type of late twentieth-century pop lyricist, is his lack of pretence. On Charmed Life, the new ‘Best Of’ compilation, there are hardly any songs Hannon wrote about himself. (There are songs sung in the first person, but mainly as someone else, a character in a story.) Morrissey gave the impression that he believed the world revolved around him and he wrote lyrics accordingly. Jarvis Cocker, I suspect, sometimes thinks of himself as a poet trapped in a pop star’s body. (There’s nothing wrong with this; at their best Morrissey and Cocker were seminal figures.) But Hannon’s writing is devoid of this type of thing. Indeed, that is what’s remarkable about it.

He never tries to be profound, and doesn’t believe in his own genius. (In this sense he is detached not only from his contemporaries but also a number of the great pop figures of the 1960s. Unlike John Lennon and The Rolling Stones, The Divine Comedy have spawned no semi-religious cult of supporters, precisely because Hannon’s humility as a writer prevents him from ever encouraging such a thing.) He sees ‘pop’ music for what it truly is, a glorious and yet limited form, a moment that flashes past like a fast car, bright and shiny (and often with a show-off in the driver’s seat). In ‘At The Indie Disco’ he savours the brilliance of alternative music – there are references to Pixies and The Cure, to ‘Tainted Love’ and ‘Blue Monday’ – whilst simultaneously, it seems to me, recognising the inherent transience of the genre – the revellers ‘drink and talk about stupid stuff’ and by the end there is a distinct lack of glamour as narrator is ‘freezing on the night bus home’.

Similarly, in ‘Perfect Lovesong’, Hannon pays a debt to the mid-century pioneers – ‘With a divine Beatles bassline // And a big old Beach Boys sound’ – and yet at the same time retains a kind of distance. It’s a bit like the comedian Stewart Lee, who deconstructs the act of joke-telling and stand-up as an art form, as part of his own stand-up routine. In this sense it is ‘meta’ songwriting, though never too knowing; nothing is being parodied, there is never a hint of nastiness.

More often than not the characters in the songs are what we might unthinkingly call ‘ordinary’ people. Hannon recently said of his writing, ‘I enjoy little peaks into everyday lives’, lives that are in fact far from ordinary and instead are rich with the weird and wonderful passions of myriad individuals. They’re all there in ‘The National Express’: the feeble old dear, the screaming child, the family man, the student. The scene is vivid, chaos reigns, just like in the eighteenth-century street scene paintings of William Hogarth, for whom the tribulations and delights of ‘everyday’ people were a constant source of inspiration. Similarly, the businessman in ‘Come Home Billy Bird’ reminds me of George Bowling, the protagonist in George’s Orwell’s 1939 novel Coming Up for Air; both characters are navigating the peculiar strains of middle-aged life. Billy still parties when he can whilst George reminisces about his youth and a former lover, but in the end both are drawn back to their family. They are parents now, that is their role above all else. No doubt there are many fans of The Divine Comedy who can now empathise.

Of course, first and foremost this is music, and Hannon has that indecipherable knack for melody which means that his songs do what the best ones always do: they get stuck in your head, and you catch yourself singing them over and over. The most memorable ‘pop’ music, by my reckoning, is that which combines engaging lyrical content and an unforgettable tune. Ray Davies and Paul McCartney did this perhaps better than anyone in the 1960s, and Hannon is heir to those greats.

And there is (almost) always an orchestra, which brings a cinematic,  indeed operatic quality to the production (the strings are perhaps most stirring on ‘Our Mutual Friend’ and ‘Sunrise’). For many of the tracks Hannon does away with guitar and drums altogether, staples of the indie scene for decades before and since and yet surplus to requirements here. On ‘The Best Mistakes’ there are shades of ABBA, but ABBA without the snare and the hi-hat, and instead with echoing timpani keeping time; it’s still pop, but pop that lingers, somehow, pop that isn’t in a hurry.

But is pop that isn’t in a hurry really pop? Hannon recently told an interviewer, ‘I’m not even sure if I make pop music anymore’. Perhaps that’s the reason why there is a strange timelessness about The Divine Comedy. Devoid of so much that we instinctively associate with popular music – above all, the narcissism – they have never fitted neatly into any style or genre category. Hannon has always seemed remarkably unconcerned with being ‘cool’. He is the antithesis of the fop lampooned by Ray Davies in ‘Dedicated Follower of Fashion’, and subsequently there is a composure and endurance to the songs that is born of the writer having never frantically pursued ‘all the latest fads and trends’.

Whatever it is, pop, or not-quite-pop, or something entirely different that we don’t have a name for, it’s special (and if you’ve never heard the band before, Charmed Life is the perfect place to start). Distinct, without vanity, and quite joyous in places, The Divine Comedy are more than deserving of their longevity, and I hope and suspect there are many, many more delightful albums to come…

The Divine Comedy tour this Spring:

Henry Tydeman is one half of Brighton due Barbara with brother John. Barbara’s new single A Perishing of Cherished Things is out today February 25th.

All words by Henry Tydeman – this is Henry’s first article for Louder Than War.