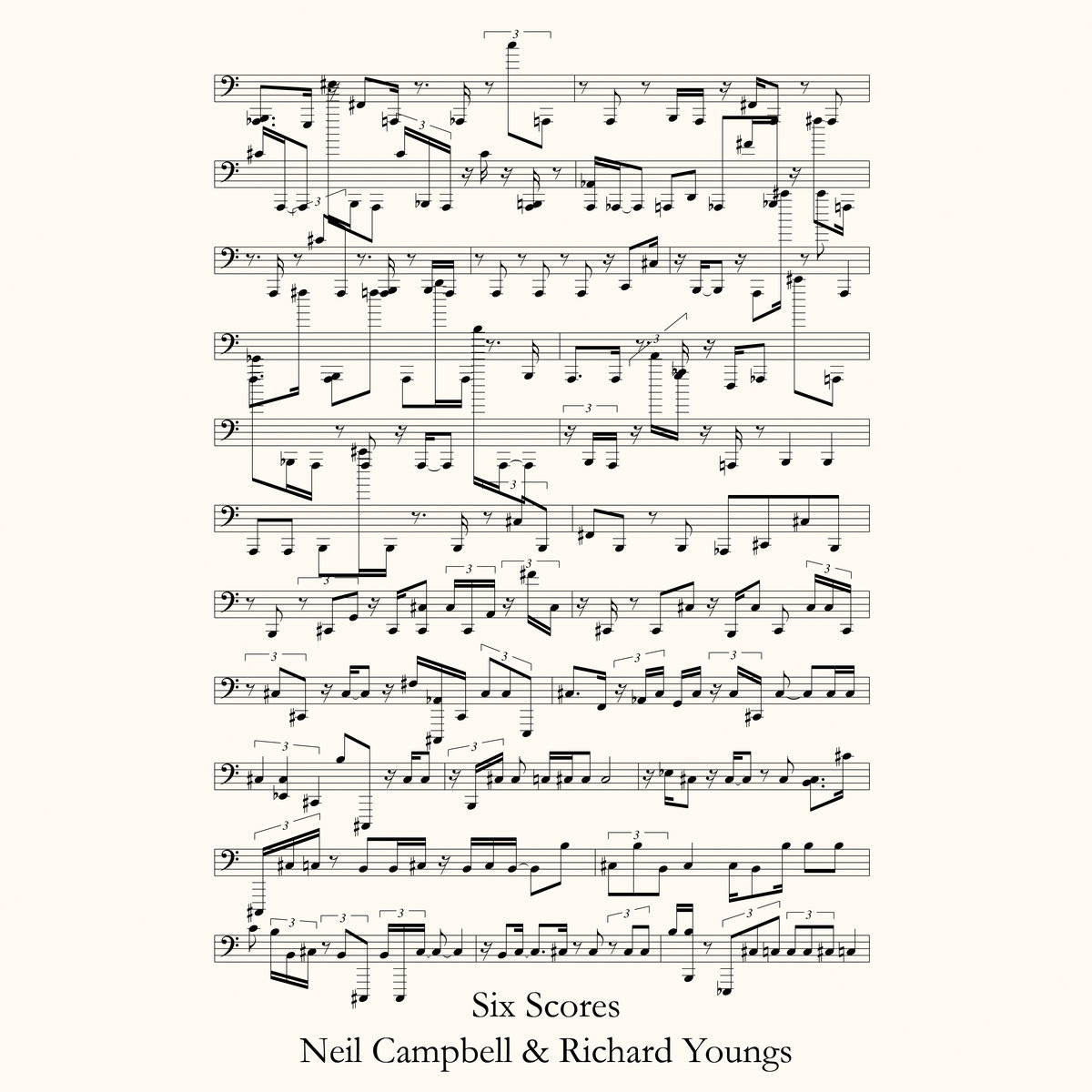 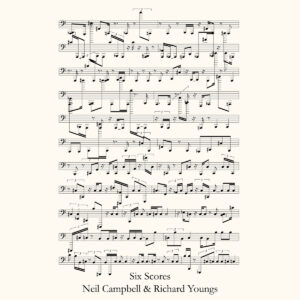 Six Scores – the latest collaboration from two of the UK’s most brain-mangling underground artists is gloriously off-the-wall, says Louder Than War’s Paul Margree.

You get the tiniest of warnings. A gentle strum of strings and piano. Two or three notes maximum. And then it hits. A right bloody racket of fuzz, squashed through an eternal phase cycle, dirtied with all sorts of electronic burbles and propelled by a thuggish bass that’s sacrificed all timbral clarity for sheer low-end aggression. Somewhere in the distance, a voice moans out in wounded lament, a sozzled Flamenco singer in search of that final vino tinto hit.

Welcome to Six Scores, the latest collaboration between those two ace chancers of the UK’s sonic underground, Neil Campbell (he of Vibracathedral Orchestra and Astral Social Club) and Richard Youngs, experimental polymath and purveyor of all sorts of off-kilter sounds. As its title suggests, the album takes its cue from scores written by the duo for each other; these then formed the basis for solo recordings, Campbell on Casio keyboard and Youngs on violin. The pair also wrote their own lyrics and added vocals to their performances. Finally, they mixed their contributions together, resulting in six atonal mashups, in which the conventional musical notions of harmony, melody and structure are replaced by a giddy, propulsive maximalism, the sonic equivalent of a turbocharged fairground ride after a three-course meal.

The reasoning behind such wanton disregard for sonic niceties on ‘Six Scores’ becomes clearer if you understand the long history of experimentation and understanding that exist between these two. They go back years, in fact, first meeting at a music festival in 1986 when Campbell delivered a reality-warping live sound mix for Youngs’ band Omming For Woks. This “largely involved turning everything up and rhythmically panning huge chunks of the sound from one side of the stage to another,” Campbell tells me via a Twitter message. ”I guess it alienated a few people.”

Since then, they’ve collaborated on record and played live together many times. I last encountered them at a show in east London back in January 2017. Campbell was appearing as part of Early Hominids, his duo with Paul Walsh. Youngs joined them for a performance that involved him counting – v e r y  s l o w l y – to 343 while Campbell and Walsh blasted shiny lumps of electronics into the gaps between numbers. The significance of the number 343 wasn’t exactly made clear, although in notes to his ‘Love UOU 343’ CDr that formed the basis of the set, Youngs alluded to a dream he’d had that prompted this act of creation. ‘Durational’ might be the term you’d reach for to describe this show, and to say it that tested the patience even of an audience pre-prepared for oddball kerfuffle of all flavours is putting it mildly.

Yet it’s been a while since their last ‘proper’ duo record, the wonderfully greasy and shimmering How The Garden  Isfrom 2001. Plenty of sonic material has flowed under the aural bridge since then, not least five volumes of Youngs‘ Foot Guitar series and the folk-rock minimalism of his The Rest Is Scenery. Campbell too has kept himself busy, his occasional forays back into Vibracathedral territory leavened with quirkier excursions like the fibrous Beetroot Toilet Terror (with KEK-W) and a hallucinatory excursion into James Joyce’s ‘Finnegan’s’ Wake’ as part of the global ‘Waywords and Meansigns’ project.

Having covered so much ground in their respective careers it is understandable that, faced with coming up with a sequel to How The Garden Is, the pair felt like mixing things up a bit. Admittedly, the messy, wobbly blurt of these tracks veers toward Campbell’s work under his Astral Social Club moniker at times, but, with Youngs on board, things are always wont to spin off in an eccentric direction. Consider Surprise Warfare, a choice cut from side A. Campbell’s lolloping keyboard riff is just Caribbean enough for the cruise-ships, yet the low, moaning vocals that drift through have a constipated Gregorian lilt. Gregorian reggae, anyone? On top of all that, Youngs’ violin cuts sweeping arcs of distorted drone that make John Cale’s atonal viola wail on the first Velvet Underground album seem positively angelic.

It’s chaos, true, but there’s method in it. The scrunching mess of pieces like Metal Grids – which layers woozy pitch-bent screams on top of a gritty splatter that’ll have you checking your needle for fluff, while disembodied chipmunk voices mutter various anagrams of the title – are curiously addictive, even more so when one tries to match the textual fragments reprinted on the album sleeve (the written cues that make up Campbell’s scores, as well as various lyrics from both artists) to the hectic gabber dribbling into your ears.

Heard this way, album closer Not Tutankhamen becomes an encapsulation of Campbell and Youngs’ loopy genius. “Begin as quickly as possible, gradually slowing down to as slowly as possible, without the song overstaying its welcome,” runs Campbell’s instruction, which pretty much sums things up. Youngs’ delivery sees his initial torrent of syllables slowing gradually to a cough-syrup slur. Wordless background vocals tow a grumpy Casio plod behind them as an astringent violin motif fusses around in the higher register. Everything seems to be melting into a sludge of sticky gloop, like a tower of profiteroles on a hot summer afternoon.  “I’ve heard surrender / Rubber stamped to applause,” groans Youngs as the track loses energy, running down in slo-motion engine failure before giving up the ghost and conking out entirely. The machine, finally, stops.

You can buy Six Scores here