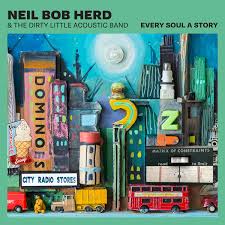 Neil Bob Herd and The DLAB: Every Soul a Story

Following on the live preview of their album published on LTW last month, we now take the time to appreciate Neil Bob Herd and The DLAB’s debut in all its sonic glory.

The Scotsman already had a fine reputation as a songwriter from the two decades he spent playing with The Coal Porters but he always had to share the running time on the records with his sparring partners in Sid Griffin’s group so it is a real treat to have a full record of Herd compositions to enjoy. Moving away from the strictly acoustic premises of The Coal Porters, this album sees our host plug back in his guitars (at a reasonable volume) and come up with a singer songwriter album with a tinge of rockabilly thrown in for good measure.

Starting with the rollicking “Badlands” which its depiction of farming crisis  (hidden description of B***** Britain ? I’ll let every listener judge), we then move to the astute description of relationships that is “As Much as I I Need To” which is followed by the shanty “The Colour  of History”. The intro of “Leave Only Love (Old Dog) ” recalls the banjo arpeggios opening Glen Campbells’ version of “Gentle on my Mind” and proves to be one of the album’s most melodic numbers. The catchy chorus of “Light a Single Candle” engraves itself in the ear as does the honkytonk of “Everyone’s Got a Book Inside Them”. The band display a more aggressive side with the bluesy “Well Well” while Neil’s songwriting reaches new peaks on “Coming Back as Jason”, a sensitive portrayal of a man yearning to be like is friend, the lyrics managing to convey a wide range of emotion without ever distracting from the songs melody, simple but not simplistic. “Exactly Waht I Wanted” suffers a little being sandwiched between too great tracks but remains an tasteful country lament while the garage-rock vibe of “Best Song” closes the album on a Nuggets like moment.