If there is a Manchester shaped gap within a given artist’s autumn touring schedule, you’re bound to catch them somewhere at Neighbourhood. With the majority of the venues on Manchester’s city centres southern side open for business from 12pm, it is one of the biggest dates in the northern live music circuit. Hosting another impressive line-up, this year’s event exceeded expectations and more. Will Metcalfe and Nigel Carr spent most of the day in Manchester checking out some of the best the festival had to offer.

Unbelievably perfectly suited for The Pink Room, Mealtime kick off proceedings in the opening slot. For such an ambitious sound, they pull off the wonky, ironic pop unbelievably well. A strong Kraftwork/New Order backbone creates some intensity but is countered with playful and fun lead parts. The six-piece are relaxed, which becomes that bit more impressive upon noticing the rate that they’re flicking through their diverse setup; an array of synthesisers light up the stage, thickened by drum machines, with subtle percussion parts adding further flavour. A sound guys worst nightmare no doubt. But the potential offered by Mealtime could be something quite special in the long run.

It’s got something, nicely constructed songs, there’s actually a bit of Morrissey influence on the vocal! Wow, when will a band shake off its Manc origins? ( ‘Won’t you come back to me?’)

Fret not if you weren’t lucky enough to see Squid. Another sea creature in the form of an Octopus is on offer. At first glance and listen, they’re very much an indie band, and a slot at Jimmy’s doesn’t help this. But their performance belies such assumptions. Freddie Hunter and Rowan Wells build a funky, pushing jazzy rhythm section; their musicianship is genuinely incredible. This is furthered by Joe Smethurst and George Hunter’s guitar and lead parts. There is a *cough* Madchester echo present, in the Stone Roses-esq fusion between instruments. However, such echoes are impressive in subtly, as opposed to repulsive in brashness.

Five-piece Full Colour is at Revolution, a good looking lead singer with a curly top and a cracking voice. What’s amazing is the number of young kids in the audience. Surely the time for guitar bands is upon us and we can overturn that dreadful R&B which dominates the charts? Lilting indie-pop with a touch of funk, in a No Hot Ashes meets Larkins vein. There is little edge to the band but upstairs at Revolution is packed and the audience loves it. When they start sounding like The Smiths I leg it to Yes for WitchFever This is the only review we could do from Revolution as the doorman, who is employed by the venue refused to allow press in!

I last saw Witchfever at the Ritz a couple of years go and they have really come on since then. They sound incredible this evening, a brilliant opener, the lead singer has properly developed her own style. Heavy raw, eclectic & punchy, she struts around the stage, head bowed, bobbing up and down as the thundering chords crash around her. Big thumping ‘Metal Postcard’ beats and shrieking Slits style vocal. At one stage, forming a corridor from the stage through the mosh pit, she dives onto the bar (is helped up!) and nails it, what a performance! She just doesn’t give a fuck! There’s a polished core at the heart of this band with the bass & drums providing the earthquake rumble.

They dive into full-on Rage Against The Machine territory – amazing! And close with Cleopatra queen bassist Alex freaking out with lead singer Amy, literally screeching in the middle of the crowd! ‘Women can be queens’ she screams and, in a festival which is heavily male-dominated you can see her point! They headline here at Yes on the 6th of December. They put on an incredible performance, the shortness of the set squeezing the very best out of them!

The queue for Hotel Lux’s set in the Yes Basement is pushing towards the door. Trying to introduce the band, Lewis Duffin mumbles…something? This lack of audibility is prominent throughout. Their set consists of a lot of unfamiliar material, but nothing out of the expected. They struggle to break away from the South London rhetoric. Duffin provocatively squints into the smokey Basement. “Wasting our lives away”, he slurs on one track. You’re right mate, we are doing just that by cramming down here to witness this shambles. Charlie Stein and Mark E Smith get a mention somewhere? It doesn’t even pick up for THAT tune, The Last Hangman. The confused crowd-surfing kids at the front have clearly been watching Peaky Blinders because they definitely haven’t heard Hotel Lux on Radio 6.

My favourite venue, the Deaf Institute is hosting Working Men’s Club and there is a long queue snaking down the street and back on itself. The organisers really need to have representatives at venues like this. There is no chance that the 120 or so people in the queue are going to get in the venue, so a sensible system whereby they are told this would give them the opportunity to try elsewhere. The Bread Shed is just up the road. It really would avoid a lot of disappointment to the crowds, which today are swelled, as MMU is holding an open day. Thankfully I get in to witness this remarkably talented young band with so many influences. They come on stage to convicted paedophile Gary Glitter’s Do You Wanna Be In My Gang, which raises a few eyebrows. The highlight of the set is Bad Blood with its infectious chorus, I’m really happy when the sun shines… There’s a huge slug of electronica in there. WMC infuse the darkness, the depths of Joy Division meets Depeche Mode with a raw punk and dance element. It’s a heady combination and one I want to hear more of. They flit about to stage sharing instruments and vocal duties. When Giulia takes the mic with a ‘hey hey hey’, and the tempo increases, the whole room comes alive! There’s Kraftwerk in there,  Adamski and even a little Pet Shop Boys especially when a bare-chested Syd leads the closing track with a cowbell.

I march down to The Albert Hall to see The Blinders and The Big Moon are just finishing up. It’s unfair to fully review the last couple of songs, but they go down well. A clean-cut band with a lighter, commercial sound which sets them apart from the current slew of indie guitar band.

Considering their clash with The Blinders, The Goa Express brings an impressive crowd to the Refuge Basement. Anyone who’s seen these before will be familiar with their constantly changing sound and setlist, which is a bitch to write about as a lot of their music goes by as anonymous and nameless. Introduction of a harmonica and tambourine on one track holds a Dylan-esq trait, and sounds emphatic with Goa’s sound. The breakneck speed of latest single The Day is Goa at their most Goa; fast, catchy and loud. Goa succeeds on keeping it ever so simple, displaying incredible songwriting ability. Waka’s Eyes makes ears ring, and brings another emphatic set to an end.

The Blinders take the stage at The Albert hall opening (as they do) with Gotta Get through. Frankly, I can’t see them opening with anything else. It’s the perfect track get me in the mood for what turns out to be a stunning performance. They pepper the well known with a few new tracks. Something Wicked The Way Comes and The Writer straddle Brave New World and the crowd becomes one huge writhing mosh pit. The last time I saw excitement like this was when IDLES played The Ritz and it’s an incredible sight to witness. They close with a segue from the powerful and incendiary ET TU/Brutus into Orbit, allowing the fans time to calm down. We’ve been with this band from the very beginning and it’s a joy to see them playing to so many ardent (young) fans! 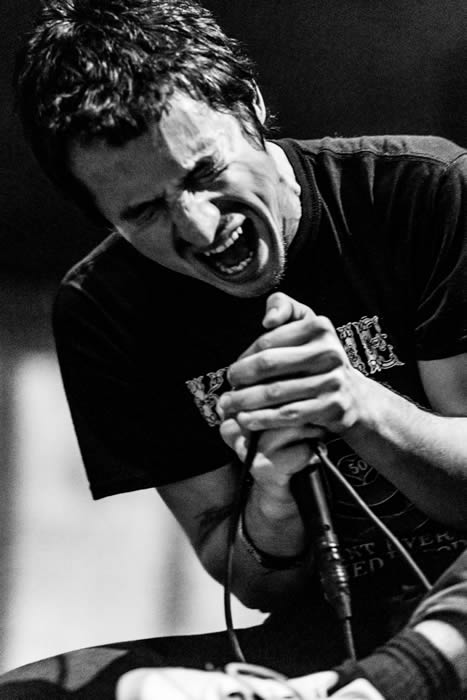 The day comes to a close at Albert Hall for The Fat White Family. Minus key member, Saul Adamczewski they open with crack-ballad, Tinfoil Deathstar. As usual, it sounds fucking great. But there’s just something missing. The amount of space in the crowd correlates with the lack of energy overall. Lias is well aware of this, spending a good part of the opening part of the set wandering around the front of the crowd, trying to spark something. The crowd and band immersion famously associated with the Fat Whites just aren’t there, making everything seem a little sloppy. Feet and Whitest Boy On The Beach feel somewhat wasted in the first half of the set, failing to get anyone moving past their second verses. Bomb Disneyland, and Is It Raining In Your Mouth have a similar effect towards the back end of the set, but by this point, people are leaving or already left. However, see this not a criticism of the band. It is poor venue choice and timing which has put an unfamiliar downer on their set.

Full Colour, Witchfever, Working Men’s Club, Big Moon & Blinders by Nigel Carr. More writing by Nigel on Louder Than War can be found at his Author’s archive. You can find Nigel on Twitter and Facebook