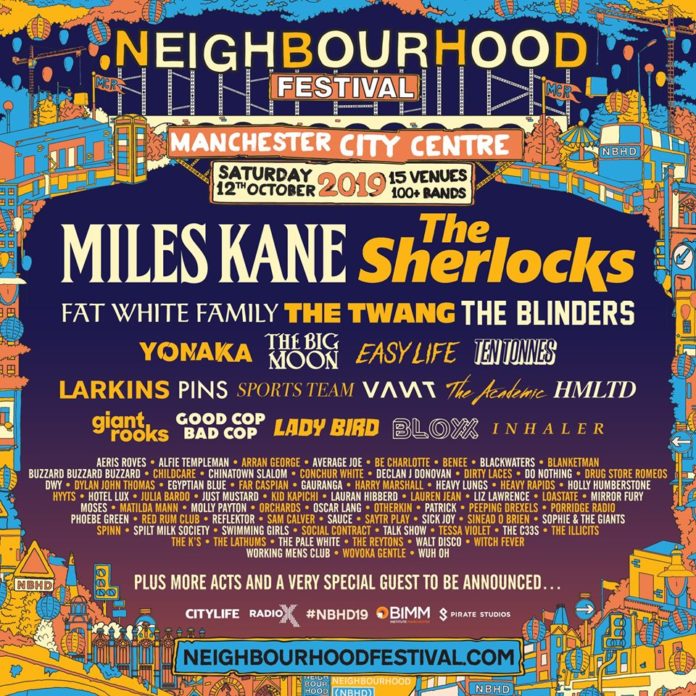 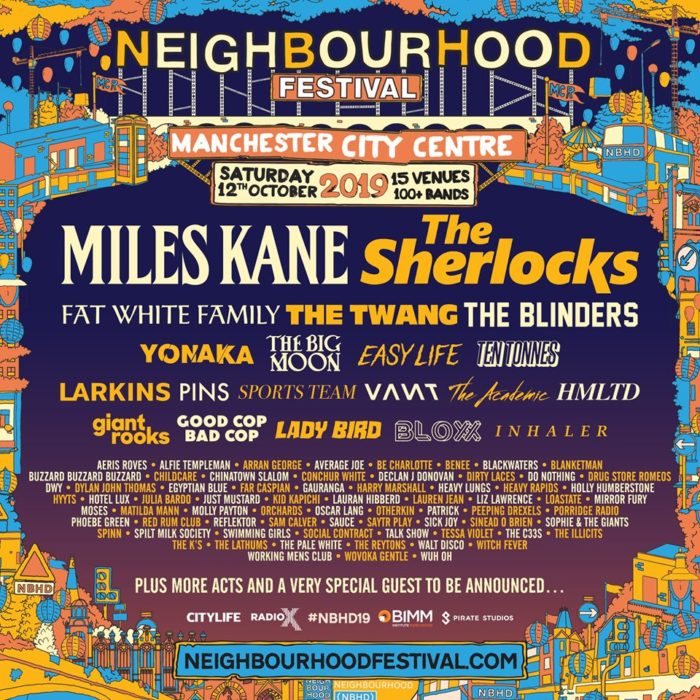 Returning for round four, Neighbourhood brings some the best offerings of breaking music to Manchester and is set to take place on Saturday 12th October. No doubt you’ve read the ‘bigger and better than ever!’ line countless times. But, as you’ll see for yourself, the list of bands due to play at this year’s event looks ridden with meat, spice and plenty of vegan options.

Headliners are Miles Kane and The Sherlocks. Lower down the bill, the likes of Fat White Family and HMLTD are not to be missed, each with enormous praise of their robust performances. For a not so sweaty show, The Big Moon and Easy Life are a more easy listening option and enjoyable in their own manor. Neighbourhood favourites, The Blinders, return to be the only band who’ve played every year of the event.

There’s almost too much to choose from in the small print. A delightful mixed bag of local talent comes in the form of Blanketman, Witch Fever and Satyr Play. The choice of venue for Working Mens Club will be interesting; their residency at YES Basement coincides with the event. Believe the hype, they’re one to watch. Also dropping by from touring with Swim Deep, indie-queen Phoebe Green is bound to amaze, having matured and grown massively since her 2017 Neighborhood set.

Other pickings include Bristol’s Heavy Lungs. The name speaks for itself: they’ll leave you gasping. Bringing further arrogance and Lynx Africa, Hotel Lux make a return to Manchester. Just Mustard and Talk Show are reminders that guitar music is not dead – both provide an equally enthralling and unique performance. You’d be daft to miss Snapped Ankles; they’re a weirder picking for the predominantly indie event, but they won’t leave you disappointed.

Oh, but the ever so famous clashes. Sacrifices will have to be made, that much is promised. Make sure to plan ahead, think queuing time and venue size, and watch out for secret sets. Furthermore, plan a slot where you can go see a band you’ve never heard of, or go to a venue you’ve never been to. Or go get tanked at Spoons. Either outcome will help spell one of the best days of live music offered by Manchester.

Tickets for the event are on sale here