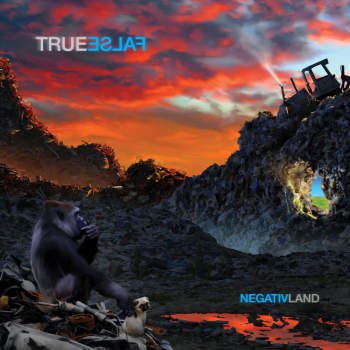 In an era defined in part by struggles for intellectual copyright and remuneration through streaming platforms for the squeezed musical artists, Negativland are part symptom and part cure. Louder Than War’s Ray Boothy reviews new album True False.

Expropriation has been their bread and butter since the late ’70s, using shameless sampling, field recordings, found recordings, sound collage and musique concrete they question the issue of the ownership, the intention and manipulation of sound recording at their essence. They sculpt ironic, darkly comic and frequently disturbing vignettes, dryly poking fun or highlighting the sinister motives of the craven elite. They often utilise simulated radio formats, warped adverts or perverse public information broadcasts to amplify the absurdity of a modern consumer existence. TRUEFALSE is their newest album, the most focused following a trio of deaths amongst their ranks and it features their departed comrades, reclaimed from the grave in sampled form.

From the opening track ‘Either Or’ they stake out the boundaries and hint at themes that will run throughout this LP; objective Vs. subjective reality, cognitive dissonance and the problem of other minds.

Soul destroying wage slavery and the jingoistic slogan “Happiness is the new productivity” provide motifs in tracks such as ‘Limbo’ and ‘Mounting the Puppy’. The latter is a soliloquy from an anonymous, archetypal hipster boss as he outlines how important his employee happiness index is. Fluent in oblique jargon and management speak, all his words signify nothing. ‘Discernment’ is a focus group rant from hell. A twisting dub clatter underpins melodic synth stabs and an incessant corporate barrage from an amphetamine-boosted blathering casualty of mindless capitalism. ‘Yesterday Hates Today’ expands isolationist despair in the digital age, the meaninglessness of aspiration through consumption.

Power and its abuses are frequently addressed with nods to their seminal 1987 album ‘Escape From Noise’, to which this record is a fitting bookend.‘Certain Men’ is a track that alludes to the toxic hyper-masculinity that has driven societal narrative since time immemorial. Samples of Henry Kissinger meld with authoritative claims that once immortality is achieved for the wealthy they will be able to abuse in perpetuity, “Certain men always get their way, in the end” the loop opines. ‘Melt the North Pole’ explores blithe patriarchal short-sightedness. It is a cutup collage that mirrors their ‘Time-zones’ track from EFN. They examine how paternal certainty is often the pride before a fall.

The album cover is of an ape in a distant future peering at a glimmer of light through a dystopian scrap-yard landscape, laden with cautionary ambience. The song ‘One Bee at a Time’ is explicit in its metaphor of hive collapse; portending mankind’s own human inflicted terminal wound. Manipulated reportage tells of an industry of experimentation and cruelty inflicted upon bees, it is impossible to ignore the damning observation that mankind’s addiction to commodified individualism will be inevitably destructive. ’Destroying Anything’ helps this theme along by suggesting, over a construct of ticking clocks and arpeggiated chimes, that we need the collapse of globalised US hegemony to avert Armageddon. ‘Cadillac’ condemns our cars for wanting to kill us, and our salads for travelling 1500 miles to reach us, but overall the songs condemn our clothed ape society in its entirety.

Although it stands as a convincing whole, two standout tracks on first listen were ‘Fourth of July’ and ‘True False’, each of which serves as a distillation of the whole album. ‘Fourth of July’ contains a sample of a ranting alt-right lady who is suffering a personal existential crisis because her Youtube videos aren’t getting enough likes. Her confused, hysterical wrath is blasted outwards at all other humans for the crime of not recognising her entitled true worth. She screams that all social media is a “tool of the left” and should be used against them.

Crystallising the impotent rage of the instant gratification generation the song subjects you to a near-physical assault, she sees her videos as a form of public service; their rejection reveals to her a frightening mass abnormality.

‘True False’ is the 9 minute plus album closer. It brings the relentless analysis of our misfiring society to an apt conclusion, beginning with a drone of existential dread and looped, hypnotic cadences of a woman sampled into endless permutations. In a lilting somniloquy, she imparts a ceaseless description of logical fallacy. It feels like being trapped forever in the in-between seconds. Recalling Throbbing Gristle or The Residents the space of the track becomes more constrictive, foreboding and delirious before breaking mercifully into a hand-clapping disco vamp four and a half minutes in. From here it becomes a jolly rumination on the endless cycles within life that imprint meaning and absurdity all at once. Life is true and false all at once. Your truth is a fallacy within the unknowable minds of other people. Life is as a riddle, you cannot know another’s truth and as we live we permanently tolerate uncertainty – relying more frequently on technology and generating paranoia. Day after identikit day, never-ending, until it does, and even when it does end, you can always be sampled and utilised to any contradictory purpose, but remember, shop as usual… and avoid panic buying.

https://youtu.be/Ilvi_rqv4yo – Fourth of July from TRUEFALSE

https://www.negativlandtruefalse.com/products/truefalse-double-vinyl – Buy it here, on LP natch, so the band get some coin!

Ray Boothby writes for Louder Than War and his author profile is here.