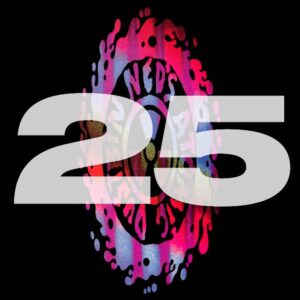 The Nineties Force Awakens for Christopher Lloyd as he checks in on Ned’s Atomic Dustbin.

It’s been a week of nostalgia. The week started with ‘The Force Awakens’, returning your correspondent into a joyous nine year old. The week ended with me revisiting my teens, for West Midlands indie-pop titans ‘Ned’s Atomic Dustbin’ regrouped to not only celebrate the twenty-fifth anniversary of their classic ‘Kill Your Television’ single, but also to unleash the first new track the band have written since 1995.

The job of a music journalist is to observe, hopefully enjoy, and analyse a band’s performance, to note the connection between fan base, band and band-mates, taking note of the set-list and to take all of that information and meld it into a coherent article. It isn’t necessarily to get drunk, hug people, and barely notice the stage and to jump around a lot. That’s a fan’s job. Unfortunately for you dear reader, this is one of the extremely rare examples of writer as fanboy. Ned’s Atomic Dustbin was a very important band for me personally; they were the first band I got into when battling school bullies. They had a loyal fanbase who travelled to every gig, a lot of those fans became my friends and peers. It’s not an understatement for me to state that of the thousands of bands whose music I have consumed, it all started for me with Ned’s Atomic Dustbin when I heard the single ‘Happy’ on the radio. It changed the direction of my musical tastes, social life, and ultimately, vocation.

Twenty-five years later and we’re at Wolverhampton Civic Hall once more. It is a venue that has a lot of historical significance to the band. It’s home turf, and it is packed, many of the familiar faces from the early nineties are here, people I’ve not seen in 15 years or so. This is the epitome of a celebratory gig. It’s revisionist and nostalgic, but it’s also very much alive.

The set opens with ‘Not Sleeping Around’ from their finest album, ‘Are You Normal?’, and what follows is a band totally loving every second of playing together in front of a clearly ecstatic bunch of friends. Huge swathes of the classic debut ‘God Fodder’ and ‘Are You Normal’ are received rapturously. That’s when a small sense of trepidation takes hold.

“We’ve got our arses in gear and written a new song” states vocalist Jonn Penney. “Shall I tell you what it’s about?” asks bassist Matt Cheslin… “It’s about three minutes.” Boom-tish. The band launch straight into ‘Self Defence’, and stylistically it sounds like it could’ve fit on their final album ‘Brainbloodvolume’, a solid piece of work. Three minutes after the trepidation, there is evident relief. This is a band that needs to record again.

The set closes with the double-whammy of ‘Kill Your Television’, and ‘Selfish’, at by which point I am out of breath, creaky of knee, and [for the first time in half a decade] slightly drunk. I’m embracing old friends, being photo-bombed by new ones and having the best night I’ve had at a gig since the Ned’s heyday. This is exactly how a gig should be. To totally forget that I was here in a professional capacity and to review the gig is a sure-fire sign that this was blinder of a set, spelling out everything you need to know about how good Ned’s were, and indeed are.