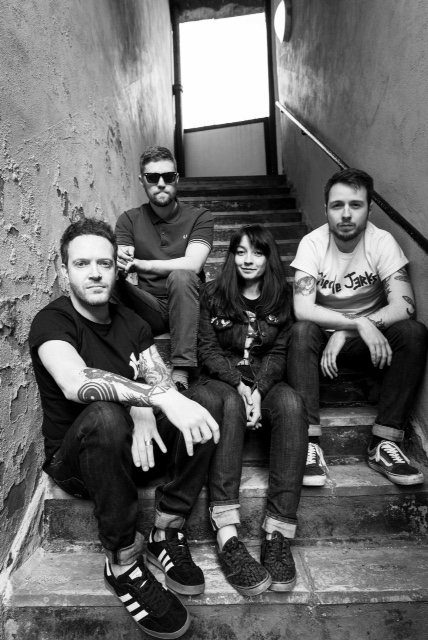 Natterers describe themselves as ‘US west coast ’80s HC punk with a Yorkshire accent’ all of which Glenn Airey finds it easy to love.

Hardcore punk. We tend to think of it as a ‘lifestyle’ genre that either absorbs you completely or turns you off for ever at the first whiff of tippex on leather or the realisation that, yes, that last song was only four seconds long and the next one’s even shorter.  Actually I’d argue that there’s a third way. Back in the 1980s, plenty of us were happy to mix the best of the international hardcore output in with our diet of more experimental post-punk, righteous roots reggae and endearingly amateurish proto-indie. Much of this weapons-grade punk material originated in California but impacted on every other state, and indeed every continent on the globe, via a spindly web of fanzines, college radio cassette-swappers and gig exchange networks. We don’t hear so much about it these days, now that even once-mighty movements are drowned out by the ubiquitous background noise of twenty-first century musics mutating, replicating and demanding our attention night and day, but the hardcore flame in truth has barely dimmed, let alone gone out.

The pick of the genre has always exhibited an astonishing urgency, precision and, yes, proficiency on the part of its players that elevate it above what can otherwise slide into a formulaic grind. Modern-day exemplars of the form now include Natterers, winningly self-described as ‘US west-coast HC punk with a Yorkshire accent’. Chris, Emma, John and Thomas have all served time, and swapped roles, in a variety of bands over the last few years, settling on a Natterers line-up that delivers furiously personal and political polemics over invigorating blasts of stripped-down but muscular punk that will send hardcore heads to heaven.

The band’s current 4-track cassette EP is entitled Demo ‘16, for pretty self-explanatory reasons, but please don’t expect a half-arsed collection of song ideas or badly-recorded first takes because what we have here is a clutch of stand-alone belters that, realistically, are unlikely to be improved upon all that much simply by spending more time stewing in a studio. This is very much a compliment. Classic HC instrumentation is all present and correct, immaculately performed and recorded with an expert’s instinct for the explosive.

If you’re a bit too clever for your own good, you’ll already have guessed that Natterers are named after a species of bat. Myotis nattereri, to be precise. Vocalist Emma and guitarist Thomas both work as ecologists. This naturalist inclination makes itself felt lyrically across the tracks on the tape: And No Birds Sing is full of sobering couplets like ‘descendants will rue our lethal legacy, but we won’t be there, we don’t care’, while Make Room! Make Room! argues, not unreasonably in my view, that there are probably enough people on the planet to be getting on with so maybe, y’know, take a cold shower occasionally. Look, it isn’t me hollering this stuff, it’s Emma, so any complaints, take it up with her if you dare.

Thankfully she’s in a more reconciliatory mood on the terrific Stand and Stare. The invitation to chuck those modern gadgets away and enjoy some real adventures in the great outdoors is very tempting indeed, and was especially so as I listened to the song on my ipod on the bus to work this morning. However, Natterers don’t particularly want to be pigeon-holed as eco-nutters, although being an eco-nutter seems noble enough to me, so they also have songs about more personal issues like mental health, social inequality and, as in the fourth track here, Defiant (Again), the liberating power of refusal to conform. Absolute tried-and-tested punk rock gold.

You can buy the download EP at ‘name your price’ (but I know you – you’ll do the decent thing) or get the cassette for a mere £3.50 or more, which is great value as long as you’ve still got a cassette player, so don’t forget to check you haven’t slung it out in your rush to get to the great outdoors. Either way, do yourself a favour and give Natterers a listen at your earliest convenience. Oh, and may I be the first to say ‘release the bats!’?