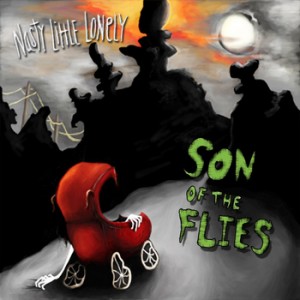 Know that feeling when you wake up with a raging hangover and your flatmate is blasting out the kind of noisy, angular and jittery music REALLY loud that makes you want to kill yourself? Say hello to Nasty Little Lonely. These Bristolians, previously known as Rock In Your Pocket, have just self-released their debut EP, guaranteed to blast those liquid cobwebs away by the end of this four-track wonder.

The title track, Son Of The Flies, hammers down with Charlie B’s honeyed vocals tantalizingly in contrast with the dark post-punk feel, yet it is only the soft launch to what is to come. From the initial psychobilly-esque swagger, Lizardbrain grows into something that wouldn’t have been out of place on a Birthday Party album.

Like a jazz band on crack, the schizophrenic mood refuses to let go until the last breathy line from Charlie B. The industrial sounding start on Turn The Screw progresses to up the grunge factor yet hanging on to the left-of-centre attitude which makes this band more compelling than most. The vocals range from honey sweet to feral screams and comparisons to Queen Adreena and the like are unavoidable, but that’s not a bad thing.

Resurrecting this kind of aural assault is more than welcome. Jesus Complex hears Charlie B turn on the seductiveness of her voice tenfold. Smouldering and eerie, reminiscent of Lydia Lunch and with more restrained back-up from Ben Fisher on guitar and Arron Bennett on drums it shows that Nasty Little Lonely aren’t a one trick pony.

You can catch Nasty Little Lonely supporting The Dogbones at the Dublin Castle, London on Friday 14 March and at the Dog & Partridge, Bolton on 28 March. Definitely a band to add to your Ones To Watch list.

Nasty Little Lonely can be found on Bandcamp (where you can buy this EP), Facebook, Twitter and Soundcloud.