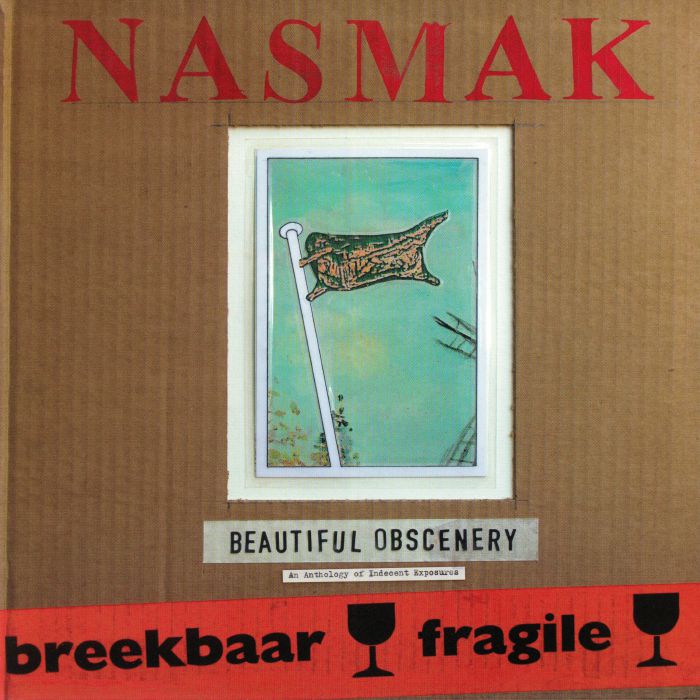 The world surely can’t be doing with another underground post-punk re-release? It seems that the amount of old European material seeing the light of day after spending the last 30 odd years in a musty old filing cabinet is neverending. Releases such as Kale Planken, Science Fiction Park Bundesrepublik, Studio 12 and Kreaturen Der Nacht, or acts like SM Nurse and Nine Circles are all sweetmeats for those who like their 80s sounds on the obscure side. A new venture comes courtesy of Dutch label Collectible Vinyl, who have made this splendid compilation of Eindhoven electro-experimenters, Nasmak. The cuts contained on this vinyl release are selections from the band’s legendary Indecent Exposure series, a set of cassettes brought out between 1981 and 1982 that contained “441 minutes of music and distortion” and not a few corking tunes. Cassettes were all the rage in NL in the early 1980s. In his book, Ultra, a tome that charts the wilder ends of the Dutch alternative post-punk scene, Harold Schellinx (himself a fiercely independent sonic experimenter with The Young Lions and with Peter Mertens) talks of cassette-based acts “mushrooming” all over the land.

Nasmak were a remarkable band in their own right. But it’s fair to say they were in the right place at the right time. Back at the dawn of the 1980s, despite its fusty provincial reputation, Eindhoven was a magnet for musical adventurers like no other place in the Netherlands. Forward thinking venues like the Apollohuis and the Effenaar, and smaller spots like the Poort van Kleef cafe regularly hosted nights of avant-garde music. Those making the instruments and devices that could play or record such music worked or studied at Philips laboratories and research studios. If you add the activities of local avant-garde composers and polymaths like Paul Panhuysen, Remko Scha and Michel Waisvisz, this was a perfect creative storm for young punks like Nasmak’s Truus de Groot and open minded musicians, like her bandmates Joop van Brakel and Toon Bressers, to make hay in.

Nasmak however, were an independent and very flexible entity, working almost nonstop in their villa in Neunen, just outside the city. The band retained a distance from the Dutch post-punk scene and cultivated both a private and international character that allowed them to ride the waves of fashion and operate more successfully (in terms of getting down with “the bizz”) than many of their  Dutch post-punk peers.

Listening to these tapes it’s noticeable how much like early Can they sound in spirit. Brutal, and bloody minded, the band are happy to explore hinterlands that are less about making music than mapping the sonic noises that rattle half noticed through their collective cerebrum. Despite the line up changes (each tape having a different personnel) there is a unity here that is nothing short of remarkable.  Tracks like ‘F.M Parade 0123’ – which is basically just drummer Toon Bressers just mucking about on some old synth programme or somesuch – nestle snugly alongside thumping dance numbers like ‘Bo Dance’ and quirky non-pop splurges like ‘Things’ or proto kraut reflections like ‘I’d Never Do That Again In Hong Kong’. Maybe this unity is a reflection of the flexible spirit of Nasmak. It always sounds like the same band. Or different elements of the same collective mind.

Nevertheless there is a palpable looseness that isn’t found on their great official releases like 1982’s 4our Clicks. Here we encounter the musty smell of practice rooms, squat gigs and cheap recording spaces. And the music reacts to this, flexing its muscles in a sort of cool down stretch, away from the hassles of sound engineers and the like. And Nasmak were a very groovy band when things locked into place. ‘Take A Look’, ‘Beautiful Obscenery’ and ‘Inside Down’ are three formidable grooves that pound along to a simple melody. This is post-punk disco at its roughest and finest and most make-do-and-mend. ‘Take A Look’ sometimes flirts with a Remain In Light groove but removes all the African / American elements and adds an existential European gloom to it. ‘Bo Dance’ is the killer track; a booming monster that somehow nods to the NDW and sounds like a Brabantse hoedown at an illegal schuur party.

The tapes afford a glimpse of the inner spaces the band were travelling through at this very creative time in the Netherlands. A sort of public-private world (or better), a private world made shamelessly public. You never feel the band were overly concerned in letting people hear what they were up to. This confidence almost morphs into a state of zen-like remove with tracks like ‘Helicopter 2’, where Truus de Groot coos over the top of some pretty uncompromising electronic minimalism.  There again – and by contrast – a track like ‘Things’ could be an electro-pop take on Screaming Lord Sutch or the Cliche Mannetjes’ ‘Lekker Legbad’ – what with the tooting synth and ploddy beat. I suppose it should be no surprise that these still sound timeless, probably more so nowadays than ever before.