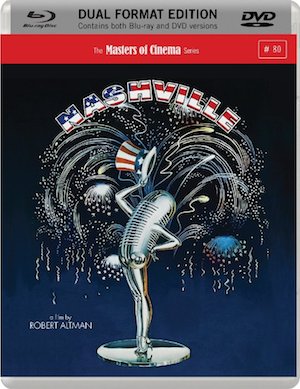 Jamie Havlin reviews the soon to be reissued film Nashville, directed by Robert Altman. Released in 1975 it’s an American musical/drama which won numerous awards. It’s also generally considered to be one of Altman’s best films so how does this reissue shape up?

Okay, firstly, Nashville isn’t the easiest film ever made to review – he says, getting his excuses in very early – and resides at the completely opposite end of the cinematic spectrum to the high concept movies beloved by Hollywood producers of the present day, ones that can be summed up in a single and easily understandable logline.

Have a look at the trailer to see what I mean.

Sprawling and featuring many of Altman’s trademark (and for the time highly innovative) techniques such as his routine use of overlapping dialogue and improvisational shooting style, Nashville is an audacious and hugely ambitious ensemble piece with no real star unless you count the city itself.

Instead of focussing on a small cast of leads, Altman gives us twenty four main characters, whose lives we follow over a period of five days in the run up to the Tennessee presidential primary, where an unseen upstart candidate named Hal Phillip Walker of the fictional Replacement Party is attempting to record his fifth straight electoral success.

A number of themes also weave their way through the film’s very much less than straightforward narrative and Nashville can be viewed in a number of ways: as a biting satire of a country in crisis, a political parable (Nixon resigned as President during the shoot) or even as a musical, as Altman himself points out in his commentary, there’s about an hour’s worth of songs in the film.

Here I should really point out that if you’ve ever been put off watching the film due to its Country and Western backdrop then don’t be and I say that as someone who is just about allergic to the genre. Altman and screenplay writer Joan Tewkesbury weren’t fans either and on its release, the musical community of the titular city were far from enamoured of the representation of their scene which many felt the director had set out to mock.

Certainly for me, Ronee Blakley asdown-home country queen Barbara Jean and Karen Black as her bitchy rival Connie White, appeared to be very convincing country stars from the era of Tammy Wynette and Dolly Parton, while Haven Hamilton (Henry Gibson), a little guy with an ego the size of several Southern states, also struck me as a very plausible Mister Nashville figure with his homespun philosophies and ridiculous late Elvis style wardrobe.

Some of his material such as the jingoistic dirge 200 Years that celebrated the United States Bicentennial and the cloyingly sentimental For The Sake Of The Children do walk a fine line between pastiche and caricature, but back then at least, the latter was something that Country and Western artists weren’t afraid to flirt with – in the same year that Nashville was released, Tammy Wynette scored two huge hits in Britain with Stand By Your Man and D.I.V.O.R.C.E, a song that gave Billy Connolly a UK number one single when he parodied it, although it was surely already bordering on parody even before the Big Yin got his hands on it.

Hamilton could definitely be filed under what one out of towner dismisses as country crapola but Altman was aiming for a mix of good and bad songs and Keith Carradine, who is very plausible in the role of a manipulative womaniser called Tom Frank, provided the film with a track that I found an unexpected treat: I’m Easy, a country folk number that went on to win the Academy award for Best Original Song and also reached the Billboard top twenty chart.

In fact, the scene where he performs the song with several spellbound female characters in the audience clearly under the illusion that he’s singing it to them personally is a real highlight of the entire movie.

With so much great acting on display, it’s almost impossible to pick out favourite performances but Lily Tomlin is superb in the role of Linnea Reese, the one woman that Tom is actually delivering those lyrics to. She’s also the wife of one heartless husband, the mother of two deaf children and a member of a large gospel choir and what makes her turn even more astonishing is the fact that this was Tomlin’s feature film debut.

Another relative newcomer, Ronee Blakley, is equally fine as the aforementioned Barbara Jean, whose success is the envy of many but whose mental state is at best fragile, coming over at times like a cross between Loretta Lynn and Ophelia.

Gwen Welles delivers too as Sueleen Gay, a pretend name for a pretend talent; she has delusions of being the next big thing but no Auto Tune to help her out with that ambition, it’s before the age of the Wonderbra too, so to catch some extra attention, she has to make do with a pair of socks to prop up her cleavage. Today, this gal would undoubtedly dream of the chance of appearing on X-Factor; here though the only time anyone pays any real interest in her onstage is when she’s tricked into attempting to strut her stuff during what is surely cinema’s saddest ever striptease in a club full of men gathered for a Replacement Party fundraising event.

Finally, a mention too for Shelley Duval, who also excels as a brazen and shallow groupie who insists on being called LA Joan, a creature with a penchant for wigs and a talent for latching on to suckers – and if she was ever to catch something rather nasty from her regular bedroom romps then you really might still struggle to work up much sympathy for her.

As Nashville reaches its conclusion, each of the characters who have been zigzagging through the storyline and interconnecting along the way, at last converge together at an outdoor concert at the city’s Parthenon to promote Hal Phillip Walker’s campaign. Some will be onstage, some in the wings and many in the audience – and let’s just say that one is never going to be allowed the chance of vote for Walker or any candidate in the forthcoming primary. If you’ve never watched the film, don’t worry, I won’t be spoiling the ending for you here.

Film critics of the day lauded Nashville. “It’s a pure emotional high”, Pauline Kael raved in the New Yorker, “and you don’t come down when the picture is over.” Roger Ebert declared it was the best American movie since Bonnie And Clyde and it was nominated for four Oscars, including for Best Director and Best Picture. Its nine Golden Globe nominations remains the record number ever received by one film.

Not only that but it has continued to be highly influential since its release almost forty years ago. Paul Thomas Anderson’s Boogie Nights and Magnolia were both large cast, multiple storyline movies that clearly took inspiration from it, as did Paul Haggis’s Crash, which bagged a Best Picture Oscar win, although few film afficionados would judge it was in any way more deserving of that honour than Altman’s film. Here in Britain, Annie Griffin’s Festival from 2005 was also absolutely in debt to Nashville albeit here comedy replaced country and Edinburgh provided a memorable backdrop.

Nashville is not a perfect film; it does sag slightly round about its halfway mark and an argument could be made that Altman should have excised a couple of songs from the Grand Ole Opry show but it is right up there with his very finest works such as The Player and Short Cuts.

Not only that, but in a period when American cinema was arguably at its creative peak and intelligent and often provocative motion pictures like One Flew Over the Cuckoo’s Nest, Dog Day Afternoon and Taxi Driver were all huge box office hits, Nashville was right up with the best of them.