In a time of what seems to be endless pointless slaughter Lizzie Nunnery sets her new play in World War Two when a citizen’s army set off from our shores to face down the Nazis.

That was the experience of ninety year old Scouser Jim who is lying on his cellar floor after an accident, but his agonised hallucinations take him back to his life as a youthful sailor on the brutal but oft forgotten Arctic convoys as he dodges U-boats taking vital supplies to the Russians.

Lizzie Nunnery was inspired to write Narvik by her grandfather who was one of those sailors who survived when thousands died in the icy arctic wastes. She’s worked with director Hannah Tyrell-Pinder to create a fictional narrative cleverly weaving the personal cost of war into the broader bloodbath.

Interweaved with the brutality of war is Jim’s love story with a Norwegian woman Elsa who he meets as a carefree pre-war fisherman, but loses touch with, instead developing a deep bromance with his fellow radio operator Kenny forged in the cauldron of war.

The real strength of Nunnery’s confident and truthful text is Jim’s yearning for an idealised Elsa who in a smart twist turns out not to be who he thought she was. It is a timely reminder of what sacrifice actually means to a new generation who are traumatised if they can’t get wi-fi in a coffee shop.

Nunnery is also interested in the greatest fear of all for Jim’s golden generation of not being able to be brave when the time comes and it does for Jim and his mates when they are torpedoed by a U-boat.

Joe Shipman has been with this production from its Liverpool days, and you will not see a better performance all year than his Jim as he effortlessly switches from the frightened old man to his younger, virile self. There is not a moment when Shipman is not utterly believable in a tricky portrayal of a flawed man haunted by horrors like closing his ship’s hatching on drowning men, which the cast mark by tapping out their death throes on the ships pipes that make up Katie Scott’s deliberately claustrophobic but effective set.

Matching this bravura performance is the superficially charming Lucas Smith as his best mate Kenny hiding a dark secret that would ruin him and prompts an awkward kiss that puts his intense friendship with Jim at risk. Nina Yndis brings authenticity to the naïve Norwegian school teacher who is forced into a moral compromise that today’s generation would wet themselves even having to think about. 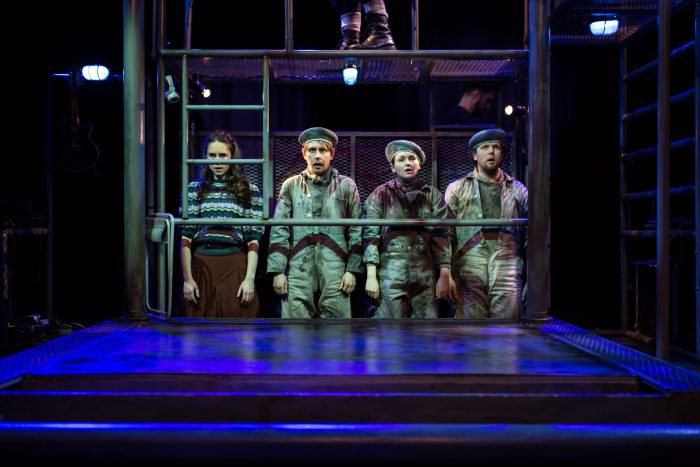 All too often musicians wandering the stage adding additional music just ends up being irritating, but the onstage trio integrate seamlessly clambering around the set performing lyrics composed by Nunnery – who has a sideline as a singer – and rising folk star Maz O’Connor’s plaintive voice adds to the melancholy air swirling around her.

Narvik kicks off Manchester based Box of Tricks’ 10th anniversary season, and what a way to start as this beautifully produced and compelling piece reminds us without ever preaching that we continue to ignore the very clear lessons of history.

As for Nunnery she may have produced a breakthrough work that marks her out as a real talent, but more than she has done her granddad and his mates proud. There really is no higher praise than that.

Narvik is on a national tour until the end of March and to find out where go to www.boxoftricks.co.uk.

All words by Paul Clarke. Read more from Paul in his author archive.