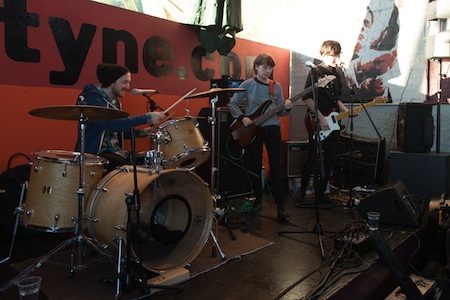 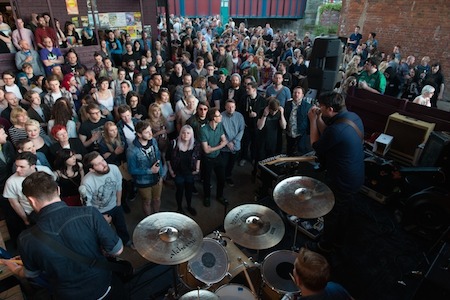 One of the highlights of the North East’s musical calendar, a raft of bands from the North East and beyond gather in some of the finest venues that Newcastle has to offer. We have the pleasure of being down at the front to witness all of the action first hand.

NARC Festival held by the magazine of the same name, forms part of the wider Ouseburn festival. NARC Festival takes place in a variety of Newcastle’s most amazing venues, across the valley. With bands from across the region and beyond, it’s always a highlight of Newcastle’s musical calendar. In order to make the most of our evening we make our way down to the infamous Tyne stage. Previously the scenes of a streaker and being shut down by environmental health for noise pollution, yet they still have the biggest and loudest bands in attendance this evening.

Walking along the road above The Tyne pub, the music is already pretty loud. 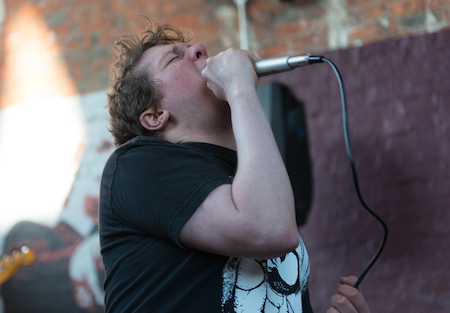 As we approach Newcastle’s awesome Big Fail, their huge riffs reverberate right through the arch. There is no wonder that this outdoor stage has been shut down before, crowds stretch back as far as the eye can see. Big Fail plough on through an impressive set with some awesome riffs, huge drums and lead singer Matt entranced as he intimidates the crowd through his terrific delivery. Despite this being an outdoor stage our ears feel truly assaulted but not for a bad reason, we’re taken aback and annoyed that we’ve not had the opportunity to see these guys before.

We decide to stick around for Durham punks Martha, with an album out on the wonderful Fortuna Pop. Fresh from a tour of the USA these guys are on top form, their cheerful indie pop goes down a storm with The Tyne’s packed crowd. 1997, Passing the Hallway is a great track and really stands out this evening, Martha are a band who have the ability to make you nod and sing along from the off. They emanate a real happy vibe and are the perfect contrast against Big Fail’s massive riffs, some jaunty indie pop and great hooks is just what we all need. A set full of short but brilliantly formed tracks picking everyone’s spirits up and making the sun shine that little bit brighter.

Staking out The Tyne for one more band this evening. However, this is to be their last gig, the awesome Rivals tried to make the long distance thing work but they’ve decided to call it a day. Not wanting to dwell on this though Rivals are Newcastle’s answer to the Tour De France ripping through their set like a tour de force. Tracks like Wax and I’m Not an Animal will probably never be heard live again, but Rivals are going down fighting. The best way for a band to go out is at their best and tonight Rivals do that. It’s still heartbreaking to say goodbye, to any band that you’ve followed since their inception.

It’s safe to say that Rivals leave everything on the stage this evening and there is now a huge crowd amassing spilling out on to the streets around.This year’s eyebrow raising entertainer in the form of the Byker Groover is in full swing. Safe to say that there’s not one person who’s not having a fantastic time, we take the departure of Rivals as a sign though and move on.

Up to The Cluny we go and yet another band who are calling it a day today, purveyors of child friendly indie Vinyl Jacket. A band who’ve garnered praise from a variety of radio stations, toured the UK and beyond are also clearly in their prime. We wander into a packed Cluny, as the boys are again attempting to rip the roof off. They perhaps lack the power of Rivals, but their hearts are truly in it. Tonight sees them play what seems like an incredibly short set, their carnival infused tracks don’t fail to get the packed crowd dancing though. Safari and Corona are huge crowd favourites, they’re great jaunty tunes with hooks that stick in your head for days. So whilst this may be their last Newcastle show they certainly won’t be forgotten in a hurry. As the band exit the stage the crowd scream, chant and stamp their feet only to be told by bassist Jack we’ve got no more and we were Vinyl Jacket. So it feels like a sombre note to end on, but we’re left with so many memories, all amazing from Rivals blowing away hundreds of people at The Tyne to Vinyl Jacket getting our feet dancing for the final time. All in all we’ve had an unbelievable time as we drag our tired bodies away from the action, we take a short while to reflect on the new bands that we had the pleasure of seeing and the old ones that we laid to rest.

Big Fail can be found on Facebook and Soundcloud.