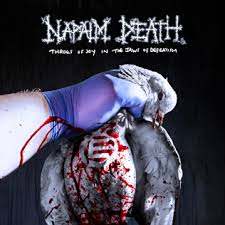 Napalm Death: Throes of Joy in the Jaws of Defeatism

Napalm Death with their incendiary new album Throes of Joy in the Jaws of Defeatism have produced an extreme metal classic. It’s an album full of exciting musical contrasts and biting social comment, that feels completely contemporary and relevant for the times we are living through. Another creative step forward for Napalm Death and extreme metal.

The creative core of Napalm Death is Shane Embury, on bass, Mark ‘Barney’ Greenway, on vocals, and Danny Herrera on drums, who collectively define the stunning rush of their crushing form of extreme metal. Fuck the Factoid which opens the album is two and half minutes of manic grindcore, with Barney in full vocal flight, propelled forward by precision aimed and impossibly fast drums and bass. Incredibly guitar wise it brings together both a rasping riff and an atmospheric post punk loop, characteristic of the great Magazine.

In fact, the new album is just completely full of such driving musical ambition and contrasts. Amoral sees the band completely embrace the post punk sound, and then fantastically lace it with some DevilDriver like groove metal, while still retaining a grindcore edge. It should be interesting to see how this one plays out in the mosh pit when it can be played live.

Then there is the musically creative apex of the album, the stunning closing track A Bellyful of Salt and Spleen, where you can’t fail to detect something of a Brian Wilson/Beach Boys wall of sound type musical arrangement. The drums absolutely thunder out of your speakers, and Barneys voice takes on a spine tingling industrial like timbre, with the song at one point launching into something that sounds all the world like a musical theme from the Beach Boys Pet Sounds album. If you have any preconceptions about what extreme metal is, this song will expose any such myths.

At this point, it’s important to say something about the album’s production. With longtime collaborator Russ Russell, at the production helm, it’s a really open and non-compressed audio soundscape full of dynamics, that works completely in sync with, and allows full expression, to the band’s music.

That Curse of Being in Thrall is one of the most intense traditionally extreme metal tracks on the album, with strident bass and intense drumming and some ultra-heavy riffing, with Barney in full on death metal growling mode. It is followed by Contagion, another really stand out track musically, with Barney literally spitting out the lyrics over an immense set of blast beats, that in the chorus also has a really affecting melodic guitar signature.

In terms of the lyrics on the album, Barney in his recent interview with Louder Than War talked about Napalm Death being an ideas band, and nowhere is this truer than on this album, where Barney has described the album’s central theme as being the treatment and perception of the other, and dehumanisation and discrimination. A cry for social justice is the defining narrative across the album.

Napalm Death’s new album is a must listen both for fans of extreme metal and as an introduction to a dynamic and musically rewarding part of the metal scene.

You can find Napalm Death here: