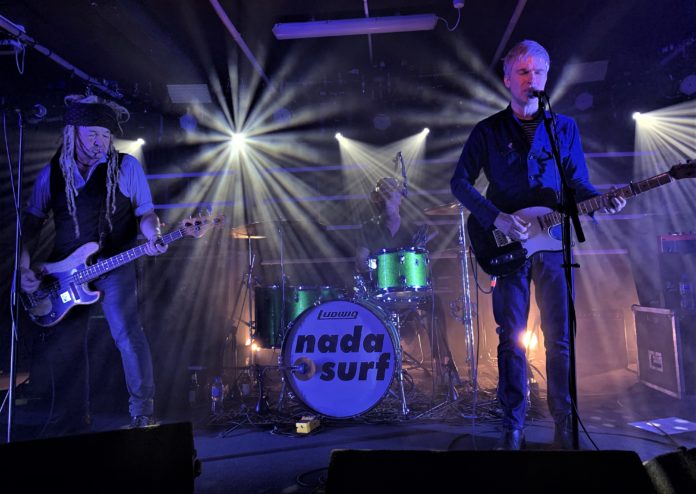 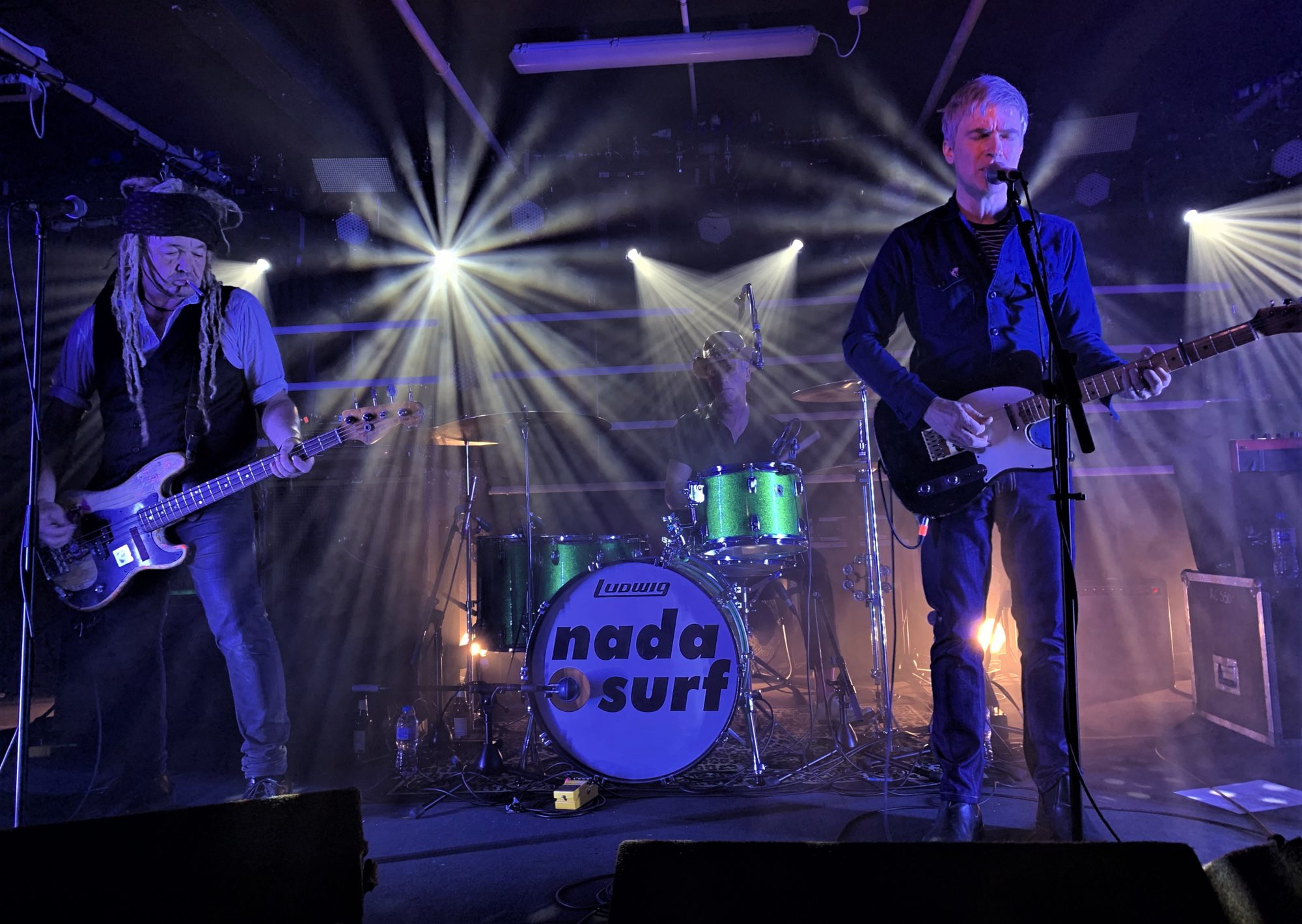 As Brooklyn’s very own masters of melodic power pop, Nada Surf, dropped into Manchester on their current European tour, Ian Corbridge joined the party in search of some joy in these challenging times.

As I approached the Academy building on my way to the gig, my mind was drawn all the way back to 2002 when I had my first experience of Nada Surf. At this point they were supporting The Vines but I still recall the massive impression this band made on me at that time – for me one of those life-affirming moments that suddenly steers you down a slightly different path. And it’s fair to say that impression has never dimmed as they have released so many great albums along the way. From the definitive breakthrough album, Let Go, that they were promoting on that 2002 tour all the way through the magnificent collaboration with the Babelsberg Orchestra on Peaceful Ghosts in 2016, an aural experience that never fails to penetrate the soul upon every listen, to the melodic charms of current album Never Not Together.

Over the years it has always struck me how whatever album Nada Surf are currently promoting, the live set that the band play always feels like a greatest hits set as the mix of songs both old and new seem to blend seamlessly. A timeless, uplifting and anthemic quality to the song writing has defined their sound. And Never Not Together stands up well against anything the band have produced to date, celebrating love and friendship and recognising that love is always there somewhere, but sometimes there is a need to look that bit harder to find it.

The composition of the band has varied over the years too but on this album and tour they have settled for the more standard quartet, comprising Matthew Caws (vocals/ guitar), Daniel Lorca (bass), Ira Elliot (drums) and Louie Lino (keyboard). A great sense of fun underpins any Nada Surf show and with the current state of the world there is little doubt that is exactly what we all needed right now.

Tonight fellow American John Vanderslice, an old friend of the band who I remember supporting Nada Surf back in 2005, does a sterling job in warming up the assembling crowd. Using just his guitar and a Roland drum machine with an accompanying delay box which he understands was co-designed by Peter Gabriel, he brings us a range of songs covering a number of his albums, including his forthcoming release, Dollar Hits, which is due out on 20 March 2020. In fact John admits he may love the box too much at times as he plays around with it. He is even joined by Matthew Caws on White Plains and then Ira Elliot and Louise Lino on Dance Dance Revolution. All told, an engaging 40 minute set which helps towards his aim of sharing the joy of being in a live environment. 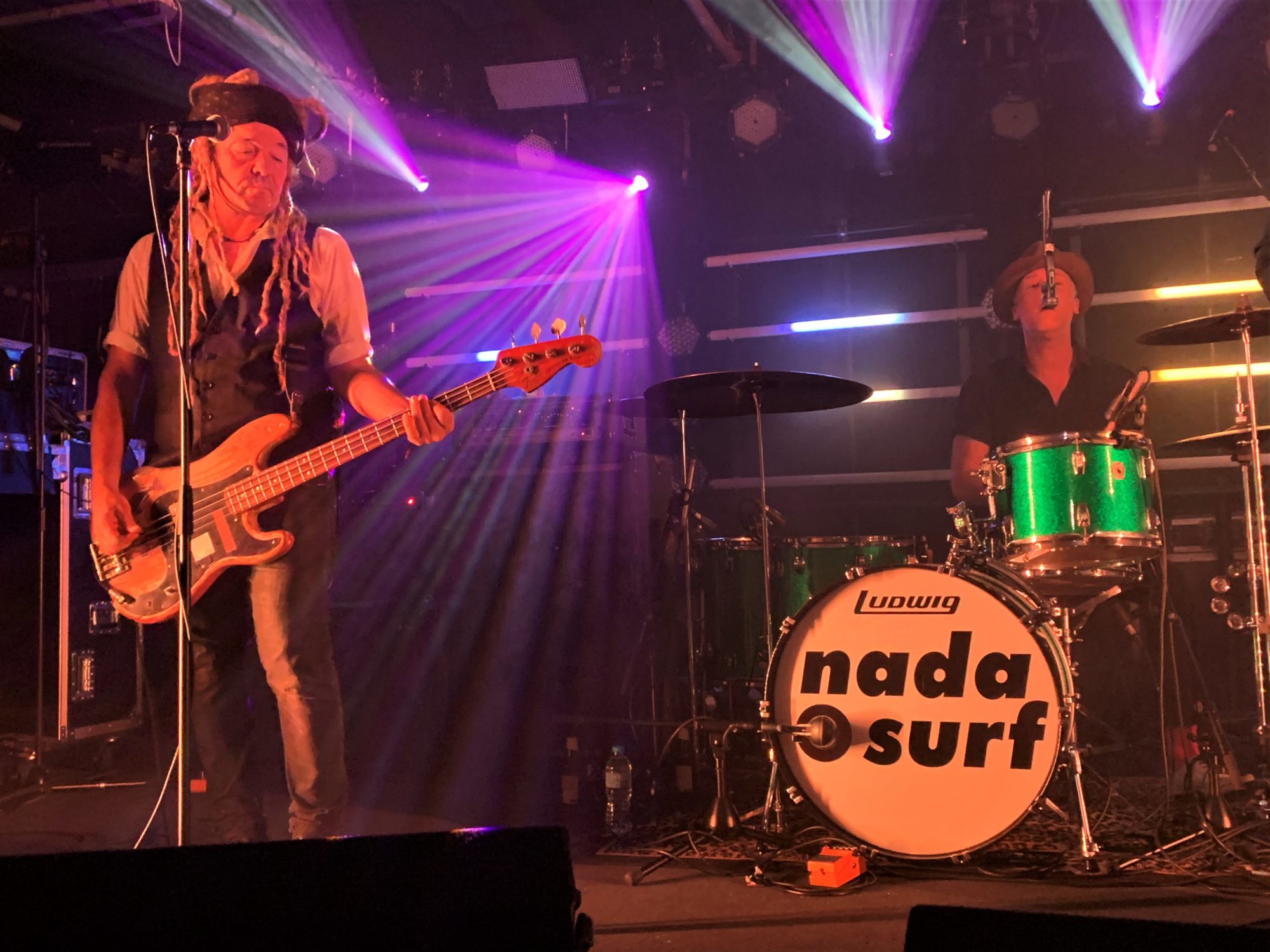 As Nada Surf hit the stage, they immediately hit an upbeat note with the first song on the new album, So Much Love, which yearns for the oncoming of spring. The joy in the room is already apparent as is the love for the new material. This is quickly followed by the driving beat that heralded Hi-Speed Soul from Let Go before they delve even further back to their debut album High/ Low with The Plan.

Friend Hospital, from 2016’s You Know Who You Are, slows things down somewhat as it takes us through a rich platonic should-to-cry-on relationship which gets you through difficult times, before Killian’s Red takes us back to 2002 and gets a great reaction from the crowd. Matthew then teases us all with a brief snippet of Treehouse from their very early days, following a request via Twitter, before we move back to the all out rock of Looking Through from 2012’s The Stars Are Indifferent To Astronomy, with the bass and drums really leading the line.

Inside Of Love has always been one of the bands best loved songs and a constant in their setlist. A bittersweet indie-rock ballad which explores unfulfilled love, its certainly a song that has connected with many people over the years and this is very evident from the reaction it gets tonight. Beautiful Beat takes us forward to 2008’s Lucky album and once again explores way to be happy again, and Cold To Stay Clear takes us through those unexpected moments of hope and positivity, something we all need right now. It really feels at this moment that we are in the right place at the right time and most certainly with the right band.

In Live Learn And Forget from the new album, Matthew is clearly trying to move on in a more positive way before Blonde On Blonde, another classic from Let Go, immediately takes us back to the dreamy days of the 1960’s, listening to Dylan in his prime on your personal stereo. A great song about magical times.

The driving beat of Hyperspace takes us back to the early days again before bouncing back to the present with Looking For You, focusing on ideas to hang onto and a spirit that walks towards you if you find it. With a melodic start this is a song that explodes into yet another anthemic chorus line. See These Bones, a song from kind dead people as Matthew explains, proves a big singalong before a supercharged Something I Should Do, with two long spoken word sections delivered beneath the driving beat, brings the main set to a climactic end. 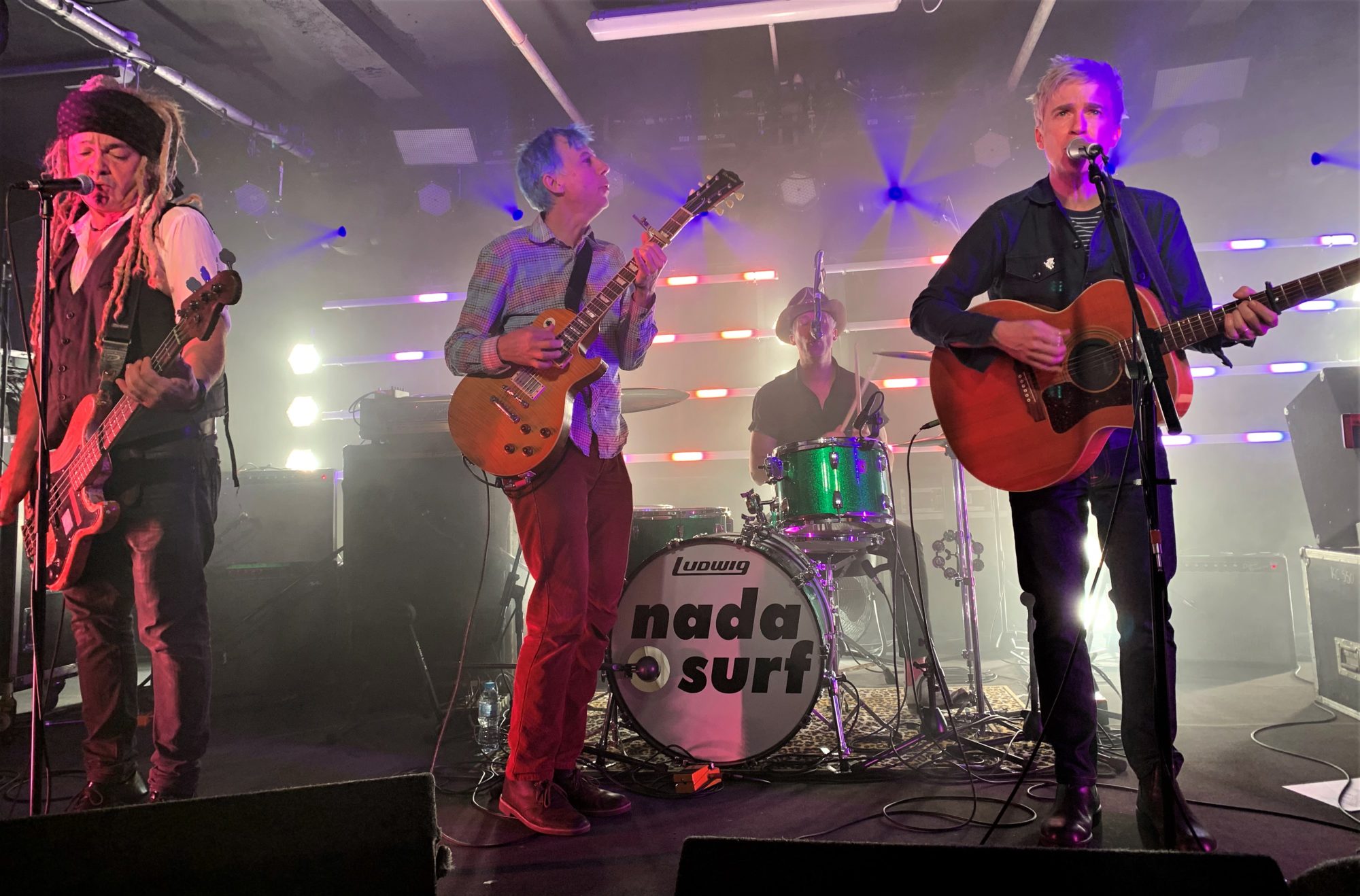 A rousing reaction from the crowd brings the band back on accompanied for the first song by John Vanderslice, as he delivers a brief snippet of the Rolling Stones’ Angie, before they launch into the mellow Just Wait from the current album. This takes us through the scary transitions into the beginnings of adulthood. Always Love is a constant mainstay in the encore which tells us “Hate will get you every time” and is once again a big singalong. A rousing Popular follows, as requested from the audience earlier, before this big party is closed in classic fashion with a magnificent Blankest Year with what sounded like the entire crowd joining in with the chorus.

From a band who have just delivered an album full of songs searching for connections, there is no question that Nada Surf always connect with their audience and tonight is no exception. As the songs move from huge anthemic choruses and sweeping guitars through to quiet and mellow refrains, we are all left with a greater sense of positivity and euphoria. Right now the world needs Nada Surf more than it ever has done and you are well advised to take a big dose, as they really do have the potential to cure all ills.