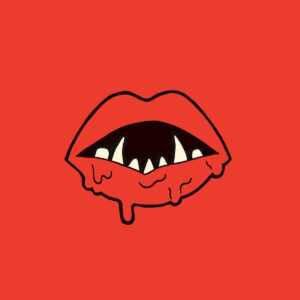 Louder than War’s Ioan Humphreys discovers his next favourite band at a Sleaford Mods Gig.

Having witnessed the wonder and absolute joy of Sleaford Mods live last week in Cardiff University, I subsequently felt I had to give a well deserved shout out to their support band, Nachthexen. There are several reasons for this. 1. They are that rare breed of a fucking great support band. 2. They have been subject to unwanted and positively neanderthal sexual harassment on this Sleaford Mods tour to an extent that needed a ‘fucking stop it now’ Facebook message from the Sleafords. And 3. They are just an honest and refreshingly angst ridden band that the UK desperately needs right now. They have the tunes, they have the lyrics, and above all else, they have guts and a ‘take no shit’ attitude that is so welcome in these times.

The fact that I didn’t quite recognise the importance of the band at the time is down to the fact that the Sleafords are an exceptional band and I have been meaning to see them for years now so I become a little overwhelmed.  Yet in hindsight several days later, I felt the urge to tweet Nachthexen to declare my unbridled love. Hailing from Sheffield, Nachthexen are Emma on Vocals, Donna on Synth, Fiona on Bass and Olga on Drums

Anyway, this isn’t a live review (although I wholeheartedly urge you to check them out live) Instead, this is a review of Nachthexen’s latest release Disco Creep. Released on Harbinger Sounds (former Sleafords label and roster to some great bands), this 4 track collection (available via 7” or download) is but a snapshot of the song structure ingenuity, DIY (punk?) spirit and over whelming joyous sound that Nachthexen make.

This four track 7” opens with the title track and what an instant throbbing disco anthem this is! Replete with Emma’s Pauline Murray channelled vocals and the electronica confusion that adds to the delicious noise and discordance, the lyrics speak for themselves with their emphatic message of unwanted attention on the dancefloor.

A heavy as fuck bass riff starts Trapped and it is again a driving shouty and synth heavy track that is relentless in it’s 80s tinged repetition, yet it manages to perfectly transcend the 80s feel and very much be in the ‘now’. It’s insistent, angry and has a message that undoubtedly many can relate to. A standout track.

A cacophony of ride cymbals, an insistent drum beat, driving bass and a crazily brilliant analog electronica riff runs throughout the 1.55 of The State Of Her. Again, Emma’s vocals are the consistent and always welcome musical addition to this band that manage to have an endless catalogue of great tunes. This foursome deserve a big audience and their positive message needs to get out there.

Nachthexen have a few releases under their belt now, including their demo cassette The Other (2015), self-titled 7″ (2016), and 10″ EP (2017). All these, and this all killer and no filler four track single, are available via their Bandcamp page.

Nachthexen come wholeheartedly recommended as (one of) THE driving forces in a most welcome backlash and ‘Fuck you!’ to the resurgence of ‘lad culture’ crowds. With a feminist ideal and the force to pull it off, the future is definitely (and always has been tbh) female.

Buy this and their other stuff now! They are just absolutely brilliant.