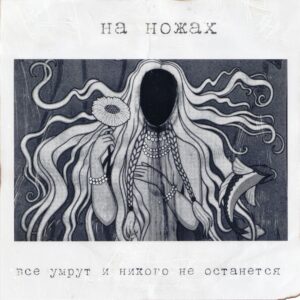 Dan Volohov reviews the new release for Louder Than War

“From light to light – through the darkness” – says Orlov describing the record itself. Among all he notices: “If you’d be enough attentive, you’d notice that the record starts just like our previous Paranoya [Paranoia] ends – within wind noise…”

Starting with opening Mayak [Lighthouse] they’d get you through the darkness and paranoia – up to the closing Rassvet [The Dawn]. But is it all about your depression and abstraction? Of course no.

Starting with April of 2019 the band has released series of singles, EP and one full-length album. Their debut single – Oshibki [Mistakes] became also their first try to find themselves – artistically. Since then, Na Nozhah has been learning how to approach their material and writing. Expressivity became the main instrument on their debut Paranoya LP. While musicians were just accompanying. In a half-schizophrenic way. Turning everything into some sort of pagan ritual glorifying gods of distorted guitars – those who put them on the newest path of their creativity.

Vse Umrut I Nikogo Ne Ostanetsya is translated as Everybody Dies and Nobody Is Left Alive which basically represents the mood of the whole record. Incredibly truthful. A bit metaphoric and not so chaotic as previous Paranoya – that didn’t leave them too much space for expressing their composers’ skills. Rather then to find the right words to say.

“Within, this newest, I probably started paying more attention to sounds. Mayak and Nikto Ne Vinovat [No One’s To Blame] came out of pedalboards-ideas. Plus, we got more interesting instruments – French horn, percussion, metallophone and different kinds of percussion instruments.” – while listening Pavel answering the question “What’s the different within this album?” I decide to focus his attention on one obviously different fact: Self-titled Vse Umrut I Nikogo Ne Ostanetsya is their longest ever-written song. Almost 10 minutes of band’s personal rediscovery.

“I like longer songs” – stresses Orlov: “Such songs you’d listen to in order to detach yourself from everything. And in general, nowadays nobody is risky enough to try something like this. Unfortunately. A long one song becomes something special for the listeners, I think.” It seems that the bass-player of Na Nozhah is quite satisfied within the result of their work: “At the beginning [of the band]– it was such period of our pen test. These days, I don’t really like some of these tracks.” – he comments on that period if the band’s history saying: “It was an important stage [for us]. When we were looking for the right proportion combining form and the content, itself”.

Uniting different musical elements, Na Nozhah have found the balance on the way through. Sometimes getting to depressive-kind-of-tension. But at the same time making their listeners pass all these sound-phases on through the listening.

You can find Na Nozhah at their Bandcamp-page.

This is the debut article for Louder Than War from our new Russian writer Dan Volohov.