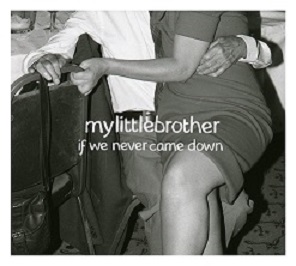 mylittlebrother – If We Never Came Down
CD/DL
Out Now

Let me introduce you to – Sgt Pepper’s Lonely Hearts Club Band. Well, not quite but let me tell you that there is something happening in the Lake District that is rather special.

mylittlebrother were apparently formed when a group of people met and drank gin, and if that’s the case that I wish I’d bought a round because the resulting sound is nothing short of impressive. With one foot in the 60s and the other in today’s music scene they have a perfect blend of uplifting, sometime humorous sometimes sad songs which are a lesson in songwriting.

Front man Will Harris already has impressive name checks on his CV – including working with The Charlatans and Teenage Fan Club – but it’s as mylittlebrother that success is undoubtedly just round the corner. Their album launch at The Geltsdale Brewery in Brampton last Saturday was so well attended that people had to overspill onto the car-park. This is from a group who had yet to release the album they were promoting.

Already championed by BBC6s Gideon Coe, Cerys Matthews and Tom Robinson they have also been described as “capturing the spirit of the 60s” by none other than Laurie Beebe Lewis former vocalist with The Mamas And The Papas. Why the praise? Songs are perfectly arranged and produced, words are beautifully written and instruments are expertly played.

Album opener, Lovers Of Life, Unite is textbook Pepper. George Martin would have been proud to have been involved. Harmonies are infectious, vocals are layered superbly and with a piano hook that accompanies a chorus that you’ll be singing for ages it’s a cracking start.

It’s not just a similarity to the Fab Four either, Nosedive could be from the Simon & Garfunkel back catalogue. Simple acoustic guitars and rising vocals strum and strut from start to finish.

What is truly fascinating about the album is the sheer quality of each song, you’d really be forgiven for thinking it was an album of classic cover versions and that’s no exaggeration. There’s something very fine about the songs and something that (if there is any justice) will see mylittlebrother propelled into our lives in just a matter of time. Part serious, part humorous My Hypocritical Friend finely demonstrates the merger between the 60s and 2014 with the music and lyrics respectively. Over The Hill is nothing short of a superb vocal performance and Paintwork is the perfect album closer, as it rises and rises and would undoubtedly be a stunning finale to a gig, but it isn’t. Instead, the album ends with Song About Amsterdam about the things we should appreciate in life and what to include on our bucket lists. It’s a great song and ordinarily a fitting finish, but Paintwork is more suited. A small criticism on an otherwise faultless album.

Growing up I had a little sister, I love her dearly, but now I have mylittlebrother too. Welcome to the family!