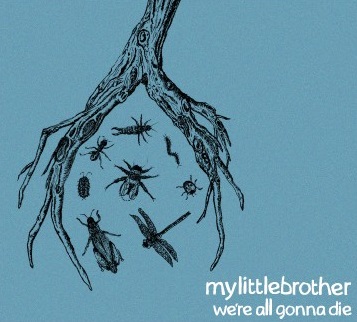 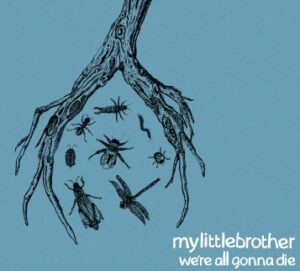 With the release of 2014s If We Never Came Down album (see review here), mylittlebrother brought one of the most refreshing pop collections of recent years. Their ability to craft simple and effective pop efforts is a rare thing in today’s climate of throwaway trite is second to none, and with their profile constantly increasing there must surely have been pressure to repeat the quality of the album.

Fear not, frontman Will Harris has once more signed, sealed and delivered in the form of five tracks produced by none other than Scott Bennett who co-wrote This Lucky Old Sun with Brian Wilson, and has worked with such music luminaries as Paul Simon, Bruce Springsteen and Flaming Lips. The question that will inevitably be on everyone’s lips is how a relatively unknown band from Carlisle can attract Bennett, the answer lies in the music.

EP opener and title track We’re All Gonna Die! despite its apocalyptical title is a call to enjoying our short existence on this mortal coil. Backed by a 60s rooted feel with Beach Boys styled vocal harmonies and psychedelic Beatles melodies, the track is classic pop. Not over-complicated, not over-pretentious, it is pure and simple a great song with a great chorus and the ability to make the listener tap at least one appendage.

Two tracks from 2013s Hey Stethoscope EP make a re-appearance in a re-recorded and uplifted form. Ghost Trains again repeats the gentle pop feel that is becoming mylittlebrother’s trademark and the subtle tones of vocalist and Harris are confident and calming. The piano led Steve also takes classic pop formulae with added backing trumpet from Probyn Gregory (also a member of Brian Wilsons band) and vocals from Dan Mason and Harris resulting in a perfectly executed piece.

Remaining tracks, the jazz infused Julie’s Game builds from its humble beginnings into a complex affair featuring some great guitar work from Bennett, and EP closer Obvious takes on a Country feel with placid instrumentation as Harris’ peaceful vocals shine way above anything currently emanating from your radio.

With mylittlebrother pumping out music of this quality it is now only a matter of time before they reach their inevitable success.