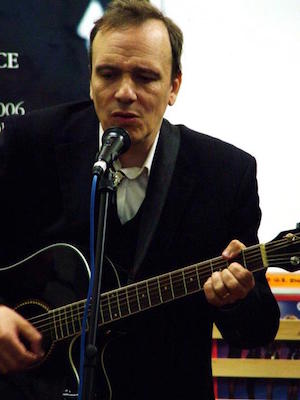 My Week Beats Your Year

Two days before appearing as a guest at Louder Than War boss John Robb’s Anarchy Chat Show at the Edinburgh Festival Fringe, Dunbar-based musician Roy Moller premiered his own show, My Week Beats Your Year, about Lou Reed and the inspirational role Lou and the Velvets played in Roy’s life.

In a witty, mesmerising and highly poignant show, Moller was joined by Lach, the instigator of New York’s Anti-folk movement and host of the Antihoot at Henry’s Cellar Bar in Edinburgh, who was described by Television’s Billy Ficca as ‘Best punk guitarist since Johnny Ramone’. Lach performed two of his own songs, which meshed perfectly with Roy’s raucous and insightful meditations on the connections between Edinburgh and New York and his own personal history, intertwined with Reed’s work through the years. The gig was held in an intimate venue, The Whole Works, on a close ,just off Cockburn Street as part of Appletree Writers’ Spoken Word Sundays.

Moving between spell-binding spoken word pieces and visceral rock ‘n’ roll, Moller took the tightly-packed audience on a moving and powerful journey through the years. Highlights included the urgent Captivity, which featured the memorable lines “They asked a roadie is Lou Reed bi? He said No, the fucker is quad”, and the closing, sermon-like spoken word segment, culminating in “Lou hear us, Lou graciously hear us, teach us to care; teach us not to care, tell us how do you think it feels”.

The main section of the show was followed by a celebratory jam on the Velvets’ classic Rock ‘n’ Roll, during which Roy and Lach were joined on harmonica by Miguel Orgel, the guitarist and songwriter for The Irresistible Urges.

In My Week Beats Your Year, Moller succinctly summed up the essence of Lou Reed, the original poet laureate of misfits and outsiders, while underscoring his own credentials for the role. Some VU white light returned, with thanks.

The full album of corking songs from the show has been released by Stereogram Recordings and can be purchased here.

Miguel Orgel/The Irresistible Urges can be found on Facebook.

All words by Gus Ironside. More writing by Gus can be found at his Louder Than War author’s archive.