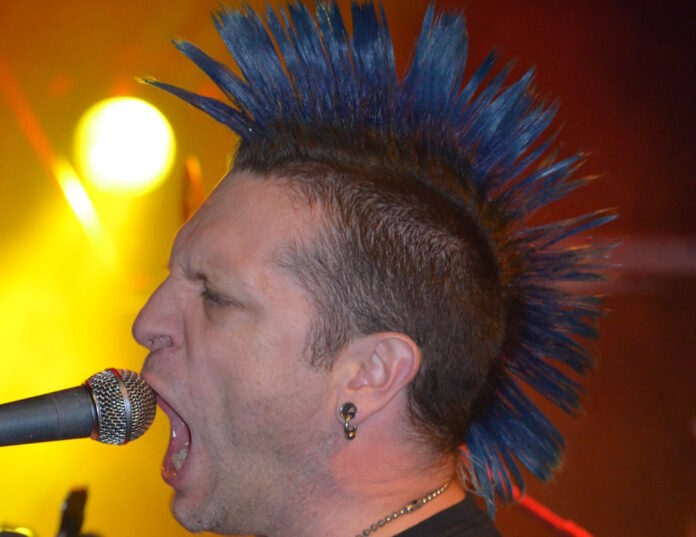 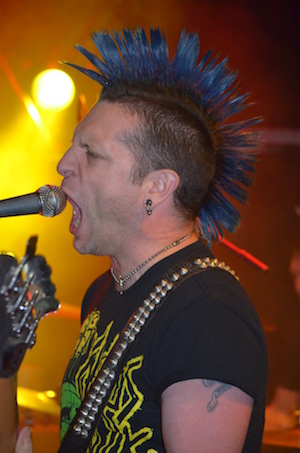 The Restarts recently released their 6th studio album ‘A Sickness Of The Mind’ (No Label Records NLR004) on both CD and Ltd edition Yellow Vinyl – the vinyl pressing sold out in a matter of weeks and has since been re-pressed this time on white vinyl; we are delighted to be able to offer as a competition prize a white vinyl pressing and a Restarts T-Shirt.

Read through Kieran’s Top Ten and then answer the question…

The Restarts formed in 1995 in Hackney, East London. With an instantly recognisable aggressive yet melodic sound they have become reluctant figureheads of the DIY punk scene – an incredibly tight three piece, multi-genre punk outfit, they play thrashy, anarcho, power chord punk laced with Ska breaks and pogo inducing bass lines which has earned them a huge and loyal following. The Restarts have hammered their way through the squats of Europe and DIY house shows across North America with reckless abandon. They lend amplification to unheard voices, playing benefit gigs for various social causes and keeping the DIY spirit of punk rock alive and well. Their years of hard graft is recognised by them being requested to play along side such heavy weights as Steve Ignorant’s CRASS, Jello Biafra & GSM, Millions of Dead Cops, The Casualties, Star Fucking Hipsters and The Subhumans.

We took the opportunity to ask Kieran which albums inspired him, to tell us about the albums that have made a difference to his life…

“Okay this took a while to deliberate over as ’10’ is such an abstract number when trying to whittle down your favourite albums…I am still pained by leaving out some of my real favs. It should be more like Top 20!!! but anyways in no particular order..” 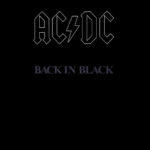 I first heard this in the 8th grade. I remember the senior ‘bad boys’ walking into the gymnasium at lunch time with a ghetto blaster blaring “You shook me all night long” and something about Brian Johnson’s voice struck a chord in me. It was the first time I felt “I need to have that music”. I then worked my way backwards discovering older Bon Scott era AC/DC which was like a band getting better and better in reverse order. I actually loved them so much I used to go to school dressed up as Angus Young, complete in school boy uniform and black cap! I still love em’ to this day, it was my soundtrack to getting stoned and drunk for the first time.

Stand out tracks; Shake A Leg, Given The Dog A Bone and Back In Black. It’s one of those albums where picking the top tracks is hard as the whole thing is brilliant. 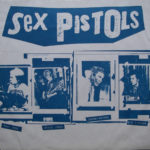 On a record shopping trip into Vancouver, my sister’s then boyfriend advised me to pick out Never Mind the Bollocks. He wasn’t a punk or anything, he had just heard it was good. At the same time my sister bought The Clash’s first LP. That day was very pivotal for me as the moment the stylus hit the vinyl I couldn’t get enough of punk rock.

Everything from the album artwork to the torn high contrast band photos on the inner sleeve captivated me (Canadian WB pressing). I must have almost burned a hole through the record from playing the song ‘Bodies’ over and over. This was back when saying ‘fuck’ was a big deal! The production is incredible and Rotten’s voice is so enunciated and snarlingly anti-establishment. I never really liked how Lydon sang after the Sex Pistols, but on NMTB he fucking nailed it.

Stand out tracks: Bodies, Holidays In The Sun, and EMI. 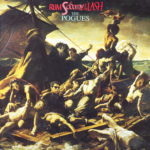 The Pogues were like an incredible breath of fresh air, London Irish trad Punk! Shane McGowan is a legend in his own right and to combine traditional Irish music with the frenetic energy of punk was pure magic.

Not many bands can claim they started a new genre of music… I never tire of this album. 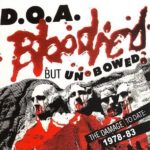 With the punk rock sickness firmly set in I started discovering bands local to Vancouver, which was of course the local pioneers, D.O.A. fronted by a growling grizzly bear, Joey Shithead. The Bloodied But Unbowed LP was all the recorded material between 78-83, with the best tracks off Something Better Change and Hardcore 81.

Me being a bit younger this LP allowed me to catch up after all those years being a little Star Wars nerd in the late 70’s! The city of Vancouver actually has an annual DOA day to celebrate them putting Vancouevr on the world map – awesome.

Stand out tracks: Fuck You, New Age and The Enemy 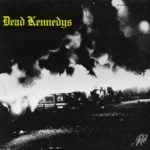 DKs are one of my favourite bands; I loved their punchy combination of political satire, humour and pure unbridled intellectual angst.

It was a hard choice between Fresh Fruit and Plastic Surgery Disasters for this list as I love them both. Dead Kennedys were one of the first bands I saw, as a young wide eyed kid from the sticks, I actually had to get my parents to drive us into the gig, as we didn’t live in the city at that point, a fact which we feverishly hid. 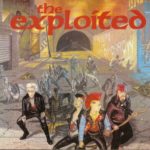 This album embodies the term ‘punk as fuck’ and I reckon is still the best Exploited album to date! It does what it says on the tin; Mohican Skeletons, gobbing, swear words, fast riffs and great production!

Big Johns guitar work is incredible, even with the stolen Venom riffs this album set a bench mark.

Stand out tracks: USA, Sid Vicious Was Innocent and Alternative. 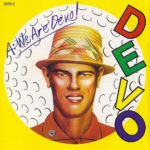 I got this album in 1980 while spending a summer with my cousins in LA. It was 1980, I was 13 and being carted off to stay with relations for the summer, this was also my first solo plane trip. I distinctly remember looking out the window when landing at LAX and there was a huge multi coloured DEVO logo painted on the wall before the runway. It was so surreal. I was tripping over this. Again working my way backwards from Freedom Of Choice I got Q:Are We Not Men. Naturally the next thing I did was adorn myself with a pair of white wrap around slit sunglasses, which highly restricted my vision but confirmed my initiation in to the legion of Spud Boys! I love that they were pioneers in making videos, but the only place you could see them (pre MTV) was at their concerts. I was lucky enough to see them in Vancouver 1981 on their New Traditionalist tour. 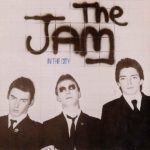 I got into ‘In The City’ after my sister bought it, she went to see The Jam in Vancouver when they played in 1982, they weren’t very well known in Canada at that time but that album definitley switched something on in me.

The hybrid of 60’s mod mixed with punk is so fuckin infectious! Takes me right back to killing boredom in a small western Canadian town.

Stand out tracks: Art School, Batman, and Larry Williams’ Slow Down are fantastic! 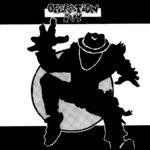 Op Ivy came out right when punk was getting a bit dull and pumped in this fusion of ska with shouty punk and totally rocked my summer of 1991 when I moved back to Toronto. Millions Of Dead Cops played Toronto that summer with Matt Freeman on bass and Tim Armstrong as a roadie, as Op Ivy had just split up…so we got to hang out with them but I remember feeling that these guys were going to go on to something big!

This album reminds me of drinking beer on the porch blaring punk rock in the humid Toronto heat! 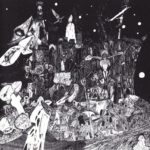 The illustration artwork on this album is pure genius and exudes a forlorn feeling of darkness. A journey into the tortured soul of Nick Blinko, allowing one to rejoice in the absurd callousness of modern life critiqued in short, pointed barbs! RP also had this mystique about them, never any band photos or anything that gave into the commercial or image based elements of punk rock. I enjoyed the image my mind conjured up of a shrieking madman in a straight jacket. The line “carnivores are like tombstones creating animal shit coffins” really opened my eyes and made me think about the ignorance of eating meat.

Stand out tracks: Vampire State Building, Radio Schizo and Rotten To The Core.

And there you have it, although inside I am still burning to tell you of the other ten!! – Kieran.

I reckon Kieran has chosen a varied and eclectic selection with one or two surprises – be good to hear your reaction.

To get your hands on the White Vinyl ‘A Sickness Of The Mind’ and T-Shirt just answer the fiendishly difficult question below; The winner will receive both the LP and the T-Shirt.

Q. Kieran mentions Devo’s debut album ‘Q: Are We Not Men? A: We Are Devo!’ – A remarkable album, that still some 36yrs following its release sounds ahead of its time; who produced it? 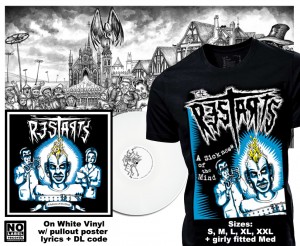 The Subject line MUST read Restarts, if it doesn’t your entry will be automatically filtered into the Trash box.

Multiple entries will be disqualified – No cash alternative, prize to be forwarded by The Restarts.

Competition is open to all LTW readers – Entries from outside the UK are very welcome. The editor’s decision is final, winners will be notified by email so you need to use a genuine address…