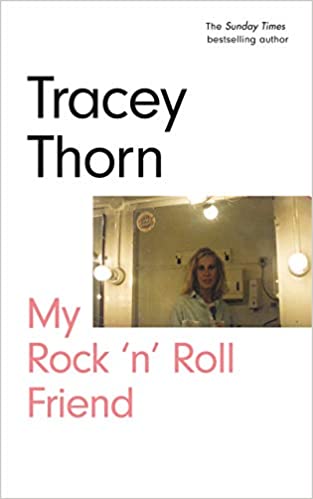 Neil Davenport’s reports on Tracey Thorn’s absorbing book about her friend Lindy Morrison the Go-Betweens drummer that explores a rock n roll life and also band politics, a women’s journey in the then mainly male music world, the counter culture and what it is to be Australian…

“The book has to appeal to more than just the three German student fans The Go-Betweens have,” says ex-Go Betweensdrummer, Lindy Morrison, to close friend and confidante, Tracey Thorn. My Rock’n’Roll Friend, Thorn’s biography/memoir of 69-year-old Lindy Morrison redefines the term ‘niche audience’. Thorn’s previous best-selling memoirs, including the excellent Bedsit Disco Queen, had the hook of her up-down-up success with Everything But The Girl, the band she co-fronted with her partner, Ben Watt. As a cool but resolutely down-to-earth figure, Thorn is also enormously likeable and, for a certain generation, relatable. She’s A Good Egg.

Lindy Morrison and the brilliant drummer she was a member of, the Go Betweens, are also touchstones for a certain generation, but the audience range is dramatically smaller. As My Rock’n’Roll Friend often repeats, the Go Betweens barely sold any records in the Eighties. Sure, due to heritage music magazines, plush box sets and even a glossy documentary film, their dead star is now brighter than it was in 1987. But outside a small hardcore of Go Between watchers, it’s difficult to see who’d be that interested in an ex-member of an obscure band from thirty-five years ago. Thorn has admitted this was a tough pitch to make.

Morrison was sacked from the band in 1989 and wasn’t invited to the Go Betweens reunion in the late Nineties. Thorn’s point is that Morrison’s contribution has been neglected, her part of the story erased. The Go Betweens, Thorn argues, are now remembered as a ‘duo’, the core songwriters Robert Forster and Grant McLennan. My Rock’n’Roll Friend insists there were three. Forster was Morrison’s lover for 7 years during the band’s first ten-year existence, McLennan her scowling opponent. Early reviews suggested that Forster and McLennan come out of this book badly. Morrison was to provide an unvarnished inside story that was lacking in Robert Forster’s slightly circumspect memoir, Grant and I. In fact, it’s more noteworthy for the absence of gut punching revelations.

But this is also why My Rock’n’Roll Friend works. It is a far more dignified and thoughtful account of Morrison’s life and in the process Australian society in the Seventies. We learn about Morrison’s involvement with the Australian black panthers and fighting for aboriginal rights. We learn of her battles with the authoritarian Queensland police and the importance of ‘wearing shoes you can run in’. We witness her milieu’s reaction to the Dismissal, when the CIA and Mi5 led a coup against Prime Minister Gough Whitlam in November 1975. Thorn also takes up the whiff of classism towards Australians living in the UK. The accusation of being all surfers and sportos, a little bit basic we discover, is never far behind.

Morrison had to contend with such anti-Oz prejudices in London during the Eighties. But that was nothing compared to the prevailing sexism of the era. And it’s this that gives My Rock’n’Roll Friend its anger and heart. Thorn does a meticulous job in cataloguing journalist’s dumb sexism and lazy assumptions against Morrison. She correctly calls out the music press for not being a progressive alternative to backward attitudes towards women of the time. As she says, the values of a private school in Australia could also be found at the NME. An excruciating discussion about sexism on an Australian TV programme, Blah Blah Blah, with the journalist Andrew Denton provides the key evidence for the prosecution. Thorn is equally withering about the Go Betweens use of Lindy as a virtue signalling PR boost, but not matched by how she was treated in the band.

And here is where My Rock’n’Roll Friend is less convincing. Thorn’s argument is that Morrison’s ill treatment and erasure from the Go Betweens is a product of a sex war. That it’s typical male behaviour, the boys in the band ‘threatened’ by an outspoken and gregarious woman such as Morrison and thus dismissed. Intra band politics can be banal but brutal affairs. Songwriters jealously guarding their status (and royalties) from other musicians (the ‘Rick and Bruce’ syndrome, as Morrissey once mischievously quipped about The Jam’s jilted rhythm section). Such tensions exist without any sex war dynamic.

Take Portland punk band, Sleater-Kinney. Two years ago,shockwaves in the indie firmament erupted when the band’s drummer of 23 years, Janet Weiss, had left the band (coincidently, Weiss played drums on the Go Betweens 2000 comeback album, The Friends of Rachel Worth). It was later revealed that the band’s songwriters, Corey Tucker and Carrie Brownstein, had demoted her from equal partner to a mere hired hand. It was Weiss’ ace musicianship, her powerhouse drumming that contributed to Sleater-Kinney’s breakthrough album, Dig Me Out in 1997. There was also the same process of re-writing Sleater-Kinney as a duo of songwriters, not the band-as-a-gang trio they’d been for decades with Weiss. Even an all-female band as leftist as Sleater-Kinney can still succumb to egos and bean counting.

The other fissure in the Go Betweens was age old personality clashes. In particular between Morrison and McLennan that was fuelled by a generational clash of politics. At seven years older than Forster and McLennan, Morrison was fully immersed in Sixties counter-culture ideals of ‘free expression’, radical psychoanalysis and the smashing of personal/public boundaries. In the punk and post-punk era of the late Seventies and early Eighties, such hippie ideals were now considered to be bad form. As Thorn writes, “Robert rejects the subculture she has come from and says it is just an easy cop-out, that it is full of its own conventions about sex and drugs and art. He talks about a new stance which will reject the hippy ideals, reject Kerouac.”

Part of the new stance was for post-punk musicians to embrace modernism, high art and older bourgeois ideas of probity and stiff-upper-lip. Simon Reynolds once argued that the biggest influence on post-punk bands was a ‘well-worn library card’. Post-punk bands wanted to learn from the best of bourgeois culture. The lazy relativism of the counter-culture seemed to repulse a younger generation of punks and post-punks. You only have to witness Nick Cave’s eloquent and vituperative attacks on woke identity politics, or even Thorn’s scathing hatred for Glastonbury festival in Disco Bedsit Queen, to see how deeply ingrained such attitudes are. Consequently, this was played out in the Go Betweens. It was a clash between McLennan and Forster’s buttoned up reserve and Morrison’s probing psychobabble. If the songwriting pair had a misogynistic agenda against women, it doesn’t explain why Forster wishes they’d have retained violinist Amanda Brown as part of a post-Morrison setup. Regardless, such a public rejection is understandably painful and devastating for Morrison. Her close friend has ensured her time in the Go Betweens isn’t a mere back story.

At front and centre, though, Thorn’s book is about the intricacies, and the limitations, of female friendship. She mentions how female friendships can be complicated, distorted as they can be for rivalries over male attention. Those who’ve enjoyed Thorn’s blunt honesty in her previous books will find similar qualities here. There are surprising twists to the story of what happens when Thorn and Morrison do meet up for the first time in twenty years. Thorn slyly exposes the gaps between idealising past friendships and the jarring reality. There is also a shocking revelation about Thorn’s own life and the impact of empty nest syndrome on her identity. Thorn is at her best when her observations are not shoehorned into a sex war framework when her insights are sensitively developed from eye level observations.

There’s plenty of such wisdom that packs out My Rock’n’Roll Friend. You don’t have to know Before Hollywood to be on board. It’s not such a tough pitch after all.

Words by Neil Davenport – whose author profile is here.