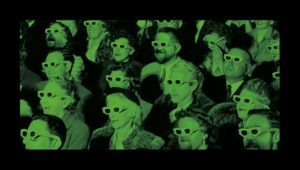 My-Ra Superstar – The Two Eyes Are Not Brothers

My Ra-Superstar are Syd Howells, Alistair Kiley and Gregg Stockdale. They are a complete enigma that manage to produce a prolific output whilst apparently living thousands of miles apart (Kiley lives in Spain. The other two misfits live in South Wales)

Their Soundcloud describes themselves as a band that “…meet when the stars are right to record esoteric art pop with unsettling lyrics”. This absolutely sums up this three piece perfectly. Impossible to predict and equally impossible to pigeonhole. I’ve reviewed their previous releases for LTW and in May 2017 they released their fourth album together in four years.

Opener The Needy has an incendiary and infectious as fuck guitar riff that melds perfectly with pounding drums. What a start! Harmonies and gorgeous chord progressions come in and even a wailing harmonica is thrown into the mix. The insistent riff and the refrain of “without your approval, I don’t exist” makes it a great start to this LP and is classic My-Ra.

A Terror Attack On Your Heart is another twisted love song with an equally twisted riff and ever present gravity of the tracks title and play on words. This band is well aware of current events, yet it’s heart and politics are in the right place. They don’t mince their words, yet they don’t cause offence either.

After the riff and full on racket of The Cabin, we get the slower, dirgier stop start of Tollund Man Is Sleeping which only add to the textures and levels that the band take themselves to. Unkown Nubian Snake Cult is a driving guitar stomp replete with chorus harmonies that i swear border on Lynard Skynard!

Jara starts off deceptively slow, but turns into a full on punk as fuck two chord riffarama that drives the track and it’s nagging vocals to it’s bitter end. The Balance has another incendiary riff that again had well placed accompanying harmonica! The band and Howell’s vocals sound more and more like The Nightingales every day.

As the album plays out you have more slowly measured tracks, and specifically with Billy B a gorgeously sang vocal over a gentle harmonium and guitar accompaniment. Final track Clay Feet is an exercise in increasing vocal anger, caustic lyrics, noisy guitar and drum cacophony’. It’s a fitting end to this tumultuous album.

According to the band, this 11 track album was written and recorded against a backdrop of the political earthquakes of 2016. Lyrical themes and obsessions range from; the psychic disruption caused by the mass uptake of social media The Needy, news media fear mongering and hysteria in the gloriously provocative A Terror Attack On Your Heart, fiery eulogies to revolutionary leftists Victor Jara and Fidel Castro, Jara and The Balance respectively, and an oblique commentary on Brexit and its aftermath in the rising storm of the album’s closer Clay Feet.

However, what also drives and influences this new work is the experience of Howells and Kiley travelling to Joujouka in the Rif mountains of northern Morocco and what they learned at the feet of the legendary Master Musicians of Joujouka. And this experience can’t help but inform the mystical feel of the tracks such as the yearning perfect pop of The Place Where The Winds Meet and the search for wisdom through exotica of Unknown Nubian Snake Cult.

Whether it’s remote far away mystical influences or the closer to home nightmare that the UK is currently living in, My-Ra Superstar seem to have the innate ability to latch on to all encompassing trends and influences and make them  immediate and current to what the population is currently feeling. Their sound may not be for everyone, but it’s nothing you have heard before and it’s heart is definitely in its right place.