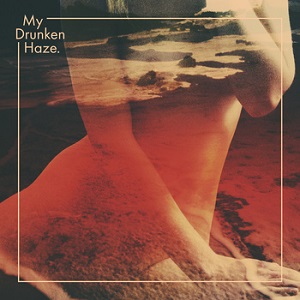 If Spir Frelini knew exactly what his group was going to produce when he formed the band back in 2010 then he was clearly a man with a mission. My Drunken Haze, despite sounding like they should be some sort of incoherent grunge band, have assembled an album of nine incredibly infectious tracks with hints of The Byrds and the bouncy sound of The Monkees that comes as the year draws to a close and threatens to tickle those hastily prepared Best Of 2014 lists.

Frelini’s vocals have a certain dreamy quality which are only enhanced by the addition of lone female Matina Sous Peau whose soft but forlorn feline charm is a masterstroke as she adds a further dimension to the group sound.

The album, purported to be a journey of a woman searching for love and longing through separation and redemption is produced by King Elephant and superbly captures the feel of the 60s with an entirely modern twist. You could be forgiven for thinking that the tracks are covers of swinging standards from the era as they perfectly enhance the atmosphere of a bygone decade.

Album opener, Carol Wait is quite simply a stunner as it moves from surf to hip-hop and back again in the opening twenty seconds. It swirls and cascades clear clinical sound over sumptuous vocal melodies over a magically authentic backing.

The ante is well and truly upped with Gambling Woman which retains the 60s feel but adds a rock element with a gripping chorus and superb percussion work. The bass is lively and the guitars jangle and break with approving straightforwardness.

Whilst tracks like Yellow Balloon and Boy Who Looks Like A Girl are wonderful examples of neo-psychedelic pop, Pleasing Illusions is a magnificent brooding soundtrack beginning the decline of the virtual love story. Reflections Of Your Mind continues the darker sound but still manages to keep a catchy element over a continuous gurgling bass and Paper Plans maintains the melancholic tones.

My Drunken Haze have succeeded in making a very accomplished debut, and there is a feeling that there is more to come.