Home Blogs My Bloody Valentine’s ‘Loveless’ is 30 this week. A personal take on... 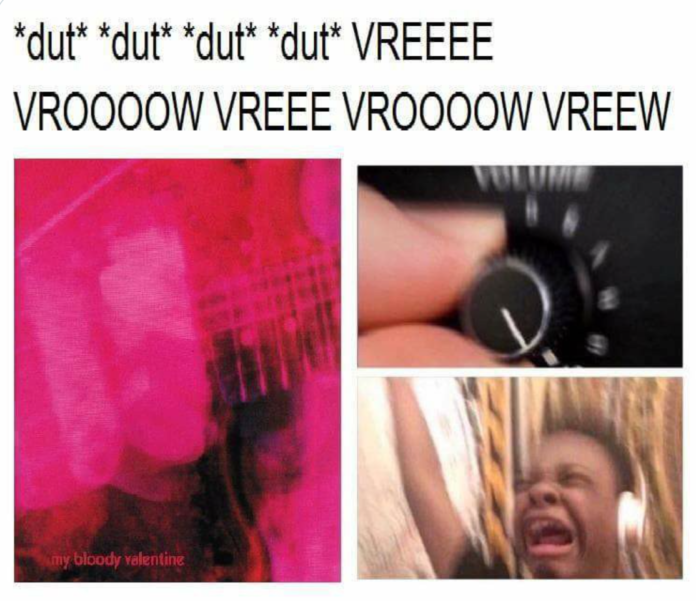 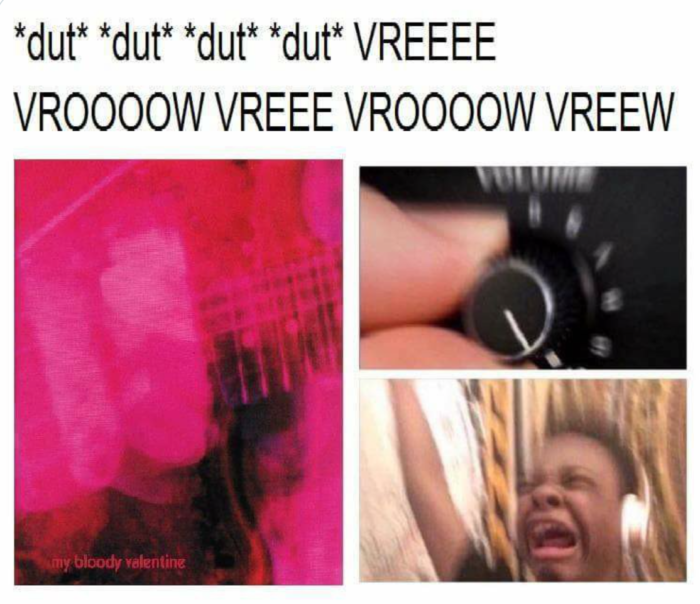 Led Zeppelin IV is 50 years old this month. Cool, cool, it has some good songs on it, even if it’s down near the bottom of my Led ZeppeList. They don’t have a bad record. What a remarkable band.

But we’re here to talk about what happened 30 years ago this month. My Bloody Valentine changed what we thought was possible on guitar when they released Loveless.

Here, in the states, very few of us were familiar with the band, who had started out as a C86-style jangle pop outfit. I was renting a room in a house over my summer break from university. The other lodger, a Goth woman who had done an exchange program in England, knew I liked psych music, and played me the Glider and Tremolo EPs.

Quite frankly I didn’t know what to make of it, but I asked her to play them a few more times, over a period of days, until it stuck. Looking back on it, the song “Honey Power” is a sort of Rosetta Stone for Loveless.

It’s all in there: the brutally bent, “glide” vibrato bar guitar parts, seraphic vocal delivery, machine gun drum fills, clobbering bass guitar, and the mal de mer outro. I couldn’t score these EPs, since they were rare, expensive imports, but we did get Melody Maker here, behind enemy lines, and I became aware that something new was forthcoming from The Valentines.

In the meantime, I got up to speed with bands like Ride, Lush, Moose, and other monosyllabic named purveyors of dream pop. They were all being lumped under the soft epithet of “shoegaze,” which is about as lazy of a term as “krautrock.” When I heard Swervedriver I really couldn’t figure out what they had in common with Slowdive, other than membership in the Thames Valley Massive.

The “DIT DIT DIT DIT” gate crash of Loveless was something I wasn’t prepared for. I mean here we were one second into the album and I was already confused. Little did I know what else the next 48 and a half minutes had in store for me. Who starts a record this way? Are those drums? A sample? It didn’t matter, because the whale mating call guitars had my attention, and soon enough I’d forgotten about it. Each minute held a sonic surprise. Did Metal Machine Music and Musik Von Harmonia have a baby? It redefined what “beautiful” means.

Upon its conclusion, what I did know is it felt like a single body of work, only with “Soon” tacked onto the end. That track had been released previously, and I imagined it was included in a sort of “you made it this far, now you get a dance party!” kind of way. If you could even call it dance music. Brian Eno once described it as “the vaguest piece of music ever to get into the charts.”

Loveless is the kind of record that doesn’t reveal itself all at once. It has very few reference points. The Cocteaus, Dinosaur Jr., some twisted interpretation of garage rock, perhaps. I loved it, but I had no idea why. I wasn’t alone. At first it only enjoyed cult-like status over here, but we were a pretty big cult. The common thread among the heads was “there’s something that draws me to it but I don’t know what it is.”

One afternoon, while doing some amateur mycology explorations, it hit me: this was my generation’s psychedelic music.

While cutoff pants college rock was dominating the underground, out of nowhere some weirdos who were not afraid of effect pedals, unrestrained by ideals of song length, and structure, went and did a new thing.

The ‘60s loom large in the indie scene. It pokes out its head in various forms, sometimes as just a paisley wink, other times so on-the-nose the band in question falls into the same category as people who reenact the Civil War on weekends. While not without reference, shoegaze felt entirely new. It couldn’t have happened without the previous chapters of Ye Olde Book of Psyche Rock having been written first, but it was a unique line, even if you could hear The Byrds in Ride, and The Stooges in Swervedriver. MBV may have had some false starts getting the horse out of the gate, and bands like Moose were described with “the term” first, but it’s safe to say that anyone claiming The Valentine’s overdriven symphony isn’t the crowning achievement of the age is just being obstinate.

On 26 February, 1992, I entered The University of North Carolina’s Memorial Hall to experience a stacked bill. Local heroes, and Merge Records founders, Superchunk, kicked off the night. Dinosaur Jr. took the stage next, and things got significantly louder. I’d never experienced anything as loud as MBV, though. I was perched at the front of the balcony, in the direct line of fire, with no bodies to dampen the sound. Wave after wave of disorienting decibels assaulted us. As with Szechuan peppercorns, the effect was somewhere at the intersection of numbing pain, and euphoria. The Ramones had been a fraction this loud. Did I even like this?

In the middle of “You Made Me Realize,” a particularly brutal number from a slightly heavier period in their career, the band got hung on a chord, as if a CD was skipping. I just thought they were being playful, but it went on.

A throb developed, it felt like things got louder, and I really felt like the building was going to collapse. It put Sonic Youth to shame, completely. The people next to me eventually screamed “OH GOD!” and left for the mezzanine, with their ears covered. I started hearing things that weren’t there, and synesthesia set in. I closed my eyes, willing pleasure win out over pain. It was all going well until I heard a pop, a sucking sound, and my ears started to ring.

They haven’t stopped since, I’m afraid to say.

This is my souvenir from that night.

I’d be happy to give back this gift of tinnitus, but maybe not if I had to erase the memory too. Later I found out that this add-on is referred to as “The Holocaust,” and it can rage from 10 to 45 minutes before they return to the song. There is a legend of the police showing up, arresting the manger over noise ordinance violations, cuffing and stuffing him into the squad car, letting him go, and when he returned to the hall the band was still on the same chord.

A lot of musicians changed their MO after that tour. What’s possible with the guitar was expanded exponentially, and a thousand imitators were launched. American bands like The Veldt had been doing dream pop before this paradigm shift, but a new scene popped up, spearheaded by brilliant bands like Lilys, Velocity Girl, Black Tambourine, and Swirlies. I owned a Fender Jaguar within two months of that show, and even though I’d always been a fan of effects, my pedalboard doubled in size in no time. It’s easy to think people are being overdramatic when they say MBV changed music with that album, but as with Hendrix, Bowie, Subotnick, Siouxsie, Kraftwerk, and of course the Beatles, one day there was no Loveless music, and the next there was. That’s the metric that matters. Loveless was our Sgt. Pepper’s. They’re one of the few bands I’ve never taken a break from. I’ve seen them countless times, in boring spaces, gilded halls, and curated festivals like Roskilde. Oddly I once found myself in a hot tub with Colm Ó Cíosóig, only moments after discussing handbags with Belinda Butcher.

Adding to the slow-growing legend behind the record, along with it nearly bankrupting Creation records, was the fact it all seemed to end after that. Would there be a follow up? Kevin Shields was in Primal Scream? He’s doing soundtracks? And yet, no new My Bloody Valentine record. Not since rumors surrounding Brian Wilson’s secret compositions started circulating had there been such an ongoing string of chatter.

Over two decades later, in February 2013, in the middle of the night, their new LP, m b v dropped. Almost nobody saw it coming. Critics were quick to dissect it. “That’s it?” “It doesn’t have the impact of Loveless!” “Pretty good but not worth the wait.” As if lightning could strike twice, and Loveless II: Even Less Love would come along and forever change music for a second time.

The fact is, it’s also a spectacular album, contains some firsts, there’s that epic flanging on “Wonder 2,” and it’s pretty remarkable that they self-released, knowing they could probably parlay their legend into a better payday through direct sales, rather than go with a major label production, involving massive recoupables. It proved they understood the internet’s power better than most of their peers, who were stuck in a mode of lamenting its dominance.

Three decades later Loveless holds up, and I mean well. Grunge came in hot, and burned out fast. Everybody sounded like Nirvana and then they didn’t, while Shoegaze was the nerdy sibling that went on to become both an academic superstar and fashion model. Today’s first-time listeners may not get the psychic pummeling the Class of ’91 did, but it’s testament to its power that people are still compelled to instantly form bands after hearing Loveless, as with releases by The Velvet Underground, R.E.M., Radiohead, Sex Pistols, Joy Division, and The Bunnymen.