Home Music Reviews Album Reviews The Mute Gods: do nothing till you hear from me – album... 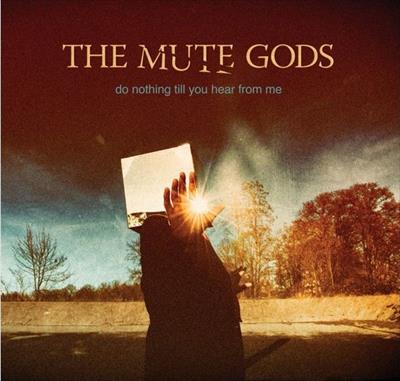 The Mute Gods – brainchild of Nick Beggs, the current ‘go to’ bass man in prog rock circles, but with a CV which includes  significant outings in the fields of pop,  rock, funk and soul. Not to mention his part in the high profile #1 hitmakers of the eighties, Kajagoogoo. Inevitable really. Armed with an impressive set of core players and billed as “engaging, expansive rock for the thinking person,” it might sound elitist yet  turns out to be quite some set.

And so, joining Beggs as fellow Mute Gods are two respected musical masterminds he’s worked with in a couple of his recent projects. Roger King, wingman to Steve Hackett (hard not to write ‘ex-Genesis guitarist’ even though he parted company over 35 years ago) brings his keyboard, programming and production skills to the table although he’s credited with guitar too. No end to the man’s talents. On drums is Marco Minneman, who, amongst others, has worked with Beggs as part of the Steven Wilson team – a badge of honour indeed.

Guests include Ricky Wilde (keys, guitar and programming) and a couple of familiar names in Nick D’Virgilio and Garry O’Toole, both known as drummers  and surprising that with Minneman on board that their presence is required.

What’s immediately apparent though is the not just the musicality but the melody and dare we say commercial appeal of the material without being overtly mainstream, albeit lyrically and philosophically touching on some wieldy and provocative topics. The notion of people speaking out on behalf, or delivering the wrath of (a) God is explained by Beggs as “the voice of reason seeming strangely quiet in the face of so much disinformation. The people who should truly be listened to are the ones who are silenced.”

But on with the music, all delivered in suitably lower case lettering, which from the sequenced intro and lyrical punch of the title track carrying the message loud and clear, taps into Beggs’ influences and blends them into a fascinating new mix.  While ‘praying to a mute god’ has an experimentally progressive Crimson-like middle section, it contrasts with the musically lighter despite the message ‘nightschool for idiots’, ‘feed the troll’ gets heavier treatment. It’s a pairing of tracks which perhaps captures best the combination of what they call the commercial sensibilities and the more interesting and challenging musical twists and turns.

Despite his instrumental virtuosity and that of his peers, Beggs doesn’t really let loose in an indulgent manner on the album in a way you’d perhaps imagine an album from a musician whose instrument is the bass to be (check out Zep’s John Paul Jones’ solo work). Having said that, his presence is significantly felt on  ‘your dark ideas’ which has some  overtly prominent bass/stick work and works well for it too. Setting up a thundering foundation  it allows  a keyboard solo to scatter its decoration over the top;  progressive in a contemporary setting.

There’s some impressive guitar on ‘in the crosshairs’ (very Hackett-like it must be said, although the album credits all three core players with guitar) and some lush keys on ‘swimming horses’ supplemented by some trebly bass work

A couple of bonus tracks litter the record, interestingly placed mid album, the first being the more distant, spacey  and reflective  ‘last man on earth’ immediately  followed by ‘your dark ideas’ seemingly placed to  contrast against what’s come before. And ‘mavro capelo’ is a groove laden instrumental along the lines you’d find Beggs and Minneman doing with Steven Wilson. All shifts in tempo and dynamics and experimental tomfoolery are placed significantly ahead of the final album track which features  Nick’s daughter Lula adding an emotive duet with her dad on ‘father daughter’ which closes the album on a note that brings things back to basics – relationships and the family unit; its lyric trying to reconcile the father role in dealing with responsibilities and the needs of his children. Alongside some of the more bombastic moments on the record, the power lies in its simplicity and a tried and tested message.

Credit again of course  to InsideOut for encouraging and indulging their passion for quality progressive music and for the thought that it’s about time we had a new power trio.

You can listen to the title track  from the album: