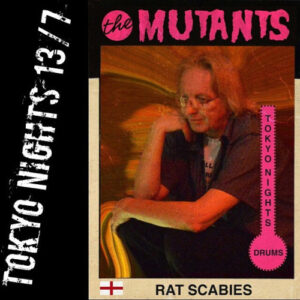 The Mutants’ debut album (Rhythm And Punk Review) got a bit of a roasting on Louder Than War from Brother Ged Babey and with probable good cause; it was, I guess, what seemed to be a great idea dreamt up in a pub over a few beers but the reality was a poorly-realised vanity project for the most part. Ged’s review is here.

This second album is a different kettle of sushi from the get-go. Main protagonist Chris Constantinou (formerly a Wolfman and briefly an Ant as well as a Sinead O’Connor session man) has assembled a crack squad of sidemen to back this sprawling, ambitious (and rather good) collection. Rat Scabies, Paul Frazer and Steve Weston are the main musicians and the album has a coterie of Japan’s finest noise exponents on board for a ride through the neon streets of downtown Tokyo. Guitar Wolf, the 5678’s (famously from the Kill Bill movies) and Mikabomb all make their presence felt and some lesser-known lights from the “J-punk” scene are featured too.

Eight of the songs feature female vocalists-no time for macho posturing here, although the girls sound as wild and gnarly as their male counterparts. Any stereotypes of Geisha girls and swooning pop fans is quickly laid to rest in these scorching tracks.

The aforementioned Guitar Wolf appear on opener Dead Beat Generation and it quickly lays down a fiery marker and surf-rockin’ statement of intent.

Unlike many “guest”-featuring albums (the aforementioned RAPR for one) this one is very much more than the sum of its parts; it reflects the quite simply surreal, full-throttle atmosphere of Tokyo and the music scenes that exist underground and at it’s weirder fringes. The quite frankly demented “Hey Ho, Fuck You” which features The Let’s Go’s is as nuts as you’d expect. At times it sounds like it’s about to collapse in on itself, at others it’s Ronettes meets The Ramones at a keg party. Flamenco Boogaloo (which features Mr. Pan from The Neatbeats) takes the pace down a few notches but maintains the intensity and sheer joy of the rest of the album. Taking these artists as well as some lesser-known lights (well, in the UK anyway) and collaborating with them seems to have freed Constantinou and friends from the punky-sleaze-glam thing of the debut. They sound in command and quite frankly as if they’re having a blast throughout Tokyo Nights.

This one delivers in spades. Give some love to a Mutant.