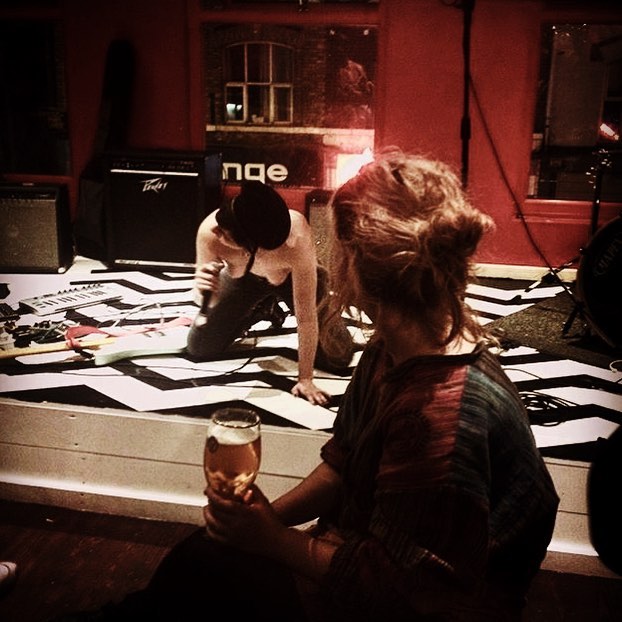 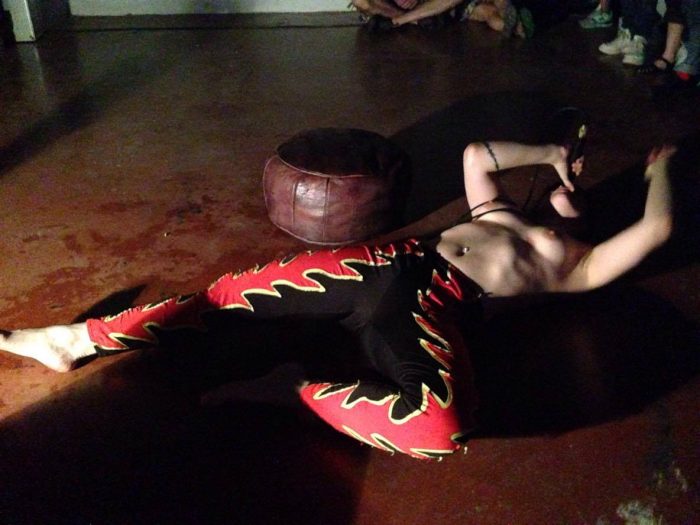 For boundary-breaking new sound which strips down social convention, the music of Mutabase – a female solo artist, performer and music producer- needs to be experienced, says Louder Than War’s Emily Oldfield after seeing her live…

I went up some stairs in Withington and had my mind cracked open – and I mean that in the best possible, musical way.

Completely unexpectedly I had stumbled into Fuel bar and found myself in front of a set from Mutabase, a one-woman performer who I don’t think can be determined by genre. Instead, I’d describe her as an expresser both of life and beyond it – putting her body, movement and mind into the music which is powerfully anarcho-punk in its approach yet pulls on everything from power pop to industrial dance – and then pulls it apart.

Her symbol is an alien feeding a human baby green goo- after all. She was climbing up windows, even wrapping a belt round her neck as she beat down on the stage.

It was one of the most intense sets I have seen in a long time, with Mutabase striding around with great gravity, stripped to the waist. ‘Free the nipple’, she declared, before re-iterating ‘Well, free my nipples’ – confronting a culture where women’s bodies are still subject to censorship and shame. This was a striking approach which pushed at my own prejudices and made me ask – if I am embarrassed, why is this? If this was a topless male performer, wouldn’t I simply see it as machismo?

And Mutabase skilfully smashed through the false barrier of ‘acceptability’, celebrating her living self and its capability – both in the display and the directness of her lyrics which lashed out, unabashed, including lines like ‘I’m furious’, repeated over to great effect, undergoing a striptease which was a show of strength on her part, rather than sexualisation.

Originally from Madrid, Mutabase is evidently making a mark on Manchester – refreshingly raw and without the pretence of many bands who claim to uphold gender issues as important. She is mature and yet not afraid to be aggressive, upset, challenging, turbulent. Her vocals remind me a little of Bjork, but burst and echo onwards with an almost acidic intensity which is still stunningly captivating.

Let it be clear, when she is on stage, what Mutabase is most involved in is the moment and the music – and this is moving to see. She slithers and sweeps round the stage, manipulating, even emancipating instruments with intense and highly tactile movements – touching and stroking.

The guitar growls under her hands, she pushes and pounds at the electronica as it seethes out a swell of tunes – the audience quickly compelled to sway and pulse. Dance driven upwards and outwards. From clawing, to crouching, Mutabase not only owns the stage at a series of levels, but projects beyond it – regularly communicating with the crowd, even taking a plastic bottle from an offering onlooker and crushing it into the beat.

It was not just a brilliant display but a brilliant actuality of confronting cultural standards and showing that life, music, is what we make it. I spoke to Mutabase – real name Critsi – after the gig:

1) Hello Cristi. How long have you been performing as Mutabase and what is the inspiration?
“Since March, this year. I’ve been recording my own stuff for 12 years, but I never dared to play my own work live. I’m more like a studio rat. I’ve played in different punk bands, but never showed this side of me before, which is the real me when I hide in my bedroom and dance and lip sing to my favourite songs in front of the mirror.”

2) Which artists have influenced you and why?
“The Matrix and The Full Monty soundtracks shook my childhood. Madonna scared me, and I loved it, too. Garbage is my teenage band, and I’m very keen on trance music from the 90’s.
And punk, and by punk I mean real punk, like Britney Spears.”

3) Do you prefer to perform topless and what is the significance of this?
“ I played topless once with my ex-boyfriend, and he didn’t want me to do it at first, cause he wouldn’t know how to explain that to his family and friends, he said. But we performed, and people loved the show, and so did he. He said it was beautiful because me being topless made me more vulnerable. I broke up with him.”

4) Is there a particular way you want the audience to react?
“I’d like the crowd to share how they finding the show, or just cheer me on so I can lose it a bit more. They’re always well shocked, quiet, static… I don’t know if they’re loving it or hating it. Especially if I’m only wearing a thong at open mics.”

5) What has been the most interesting audience reaction you have received?
“Once in Manchester a few girls came to me after the show and asked if they could speak to me? I found that so bizarre, I mean, yes? Why not? And then said nothing, just stared at me. In another gig in Madrid, a couple of girls in the crowd went topless, too. It felt like comradeship.”

6) Do you think that you can hear influences of both Madrid and Manchester in your work, or does it go beyond a sense of geographical place would you say?
“Not really, I live on my own planet.”

7) What is the most challenging thing about being a musician?
“Well, I’m not only a musician, I’m also a performer and above all, a music producer. What I find challenging is to having to comply with stupid rules.”

8) And the most rewarding?
“When people say that they’ve never seen anything quite like my show before. The thing that I enjoy the most is breaking schemes.
“And sometimes I realise that there are a lot of people that perceive the world in a very similar way than me, and that is like being part of a fraternity that I rarely find in a non-artistic field.”

9) So are you currently based in Manchester? How are you finding the city?
“I didn’t like it at all at first, because I didn’t know anybody here and I felt very lonely, but now after a couple of years I feel like a local. Manchester is great for live music.”

10) What are your future plans?
“Start a revolution.”