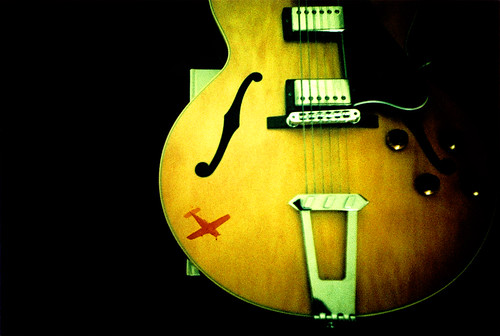 It's been a major bane of the traveling musician for years…airlines forcing them to put their guitars in the hold resulting in several broken guitars and once, for us as Goldblade, when they forgot to put the guitar on the plane altogether when we flew to Algeria causing a mass panic at the other end trying to find a guitar to play the gig. The borrowed guitar arrived last minute before the gig and the airline refused to even apologise for leaving the proper guitar lying around at Heathrow.

Easyjet have been the unsurprisingly awkward, sometimes allowing guitars on board, sometimes charging sometimes breaking them, sometimes putting them in the hold…there is no coherent policy…until now…

The Musicians’ Union (MU) has welcomed a new proposal before the European Parliament which would finally solve the problems that musicians face when travelling on planes with their instruments.

The proposal would revise Air Passenger Rights and would mean that ‘the air carriers must accept smaller instruments into the passenger cabin and must clearly indicate the terms and conditions for the transport of larger instruments in the cargo hold.’

This comes as a result of intense MU and FIM (International Federation of Musicians) lobbying on the issue which saw more than 40,000 people sign a petition to persuade Europe to bring in legislation to clarify rules on the carrying of instruments.

“I am delighted that the European Parliament looks set to adopt this proposal, which will make such a difference to working musicians.

“The MU has been lobbying on this issue for years and actually reached an agreement with the Department for Transport in 2006, but we have long been saying that it is only by working at a European and international level that we can successfully tackle this issue, as the problem is much broader than just UK airlines.

“The problem has always been that existing law allows each airline to set their own policy regarding musical instrument, and this proposal would bring much needed uniformity and fairness to the whole sector.”