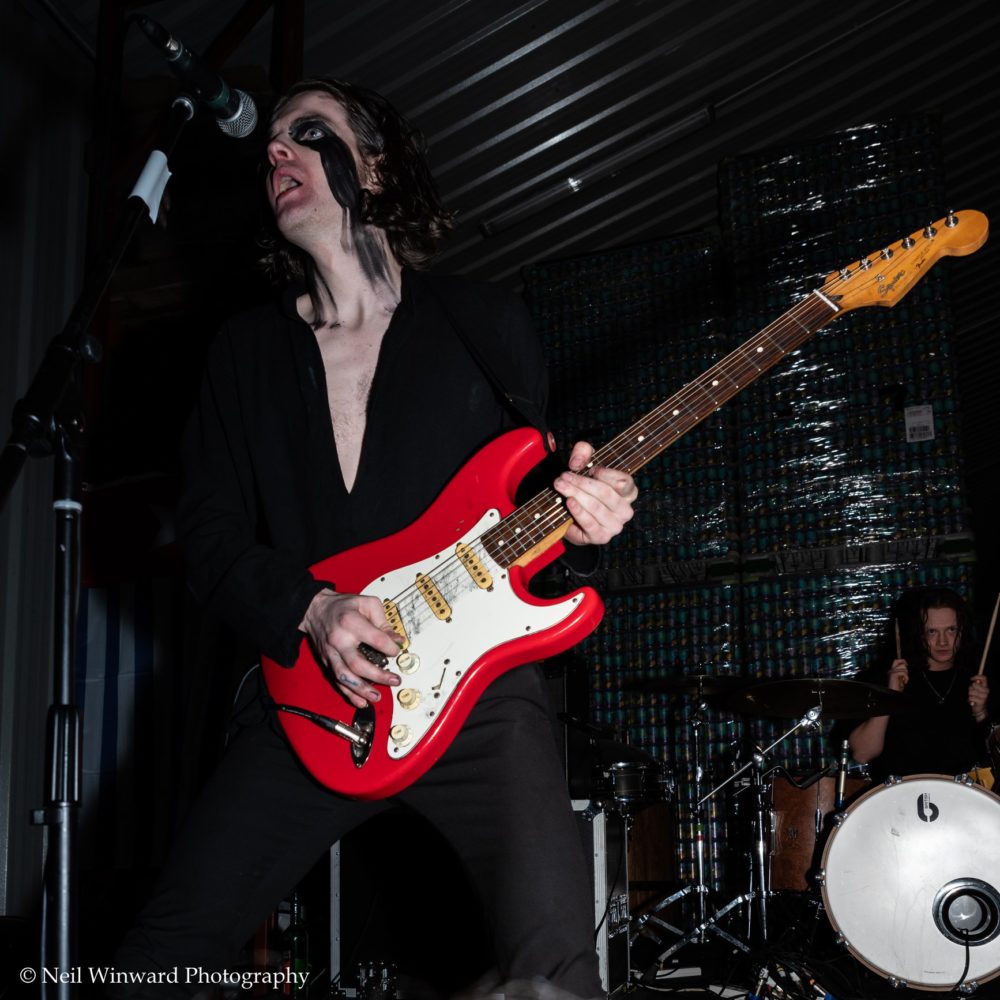 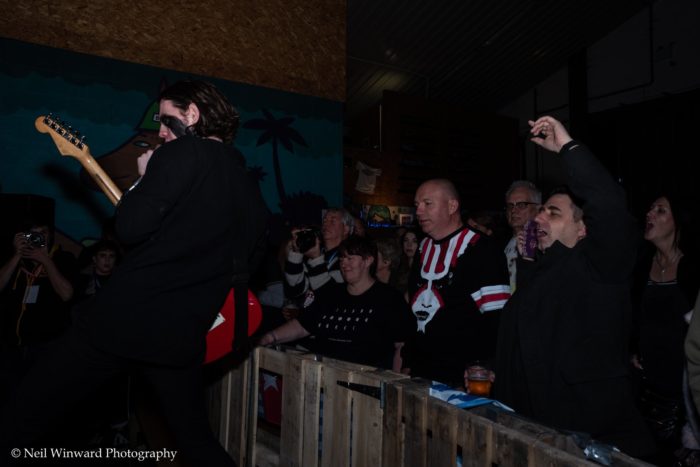 I could hardly walk back to Piccadilly after Music Is A Weapon: MCR “Punks for West Papua” – an evening on 1 December featuring a high-adrenaline Manchester based line-up of four bands: Modern Family Unit (MFU), Witch Fever, Membranes and The Blinders. In short, this was a sonically-conscious, sonically smashing event which shook me right through to the centre… as I’m sure was similar for many people there, at such a unique, intimate gig. It was absolute credit to the people behind it – Georgina Robinson and Jo Lowes, as well as a hard-working team of event and venue staff on the night. The event was in association with Alphabet Brewing Company itself, Gas Music and Puffer Fish PR.

Admittedly, my slow effort in walking back to Piccadilly was probably influenced by the fact that the location of the gig was not at a typical music venue, but instead the Alphabet Brewing Company on the edge of Manchester centre – and all the better for it. A local independent business with an industrial space, decked out with a homemade stage and simple lighting, really added to the DIY ethic of the evening… a far cry from the packaged image of punk we so often see plastered across popular culture for commercial gain. This was an evening of fresh-cut punk grit for the contemporary. A night I nearly broke my nose dancing.

After all, this was a charitable event assembled to raise awareness of two pressing contemporary social issues – the atrocities happening to the native people of West Papua, and the ongoing issue of homelessness in Manchester and surrounding areas; with ticket sales contributing to these causes.

A point worth noting is that the charitable ethic was well-handled, in my view, so the themes hit-home with the crowd without feeling preachy or superior. Instead, speeches were spliced between the bands (a brilliant line-up we were lucky to see in such a small venue)…and it was the music itself which seethed with the moving message of the productive power of like-minded people coming together. Music Is A Weapon: MCR “Punks for West Papua” marked two fingers in the face of phone-screen-scrolling-armchair-activism and instead emerged a hot-blooded, high-energy explosion of awareness… crowds congregating to collect stickers, converse, to hear more about the cause.

“Events like this are great because yes, you can be angry as an individual about injustices in the word,” said Gary Hilton, Punks For West Papua Manchester co-founder and Director at Salford-based Gas Music. “But come together as a room full of angry people… that’s powerful.” 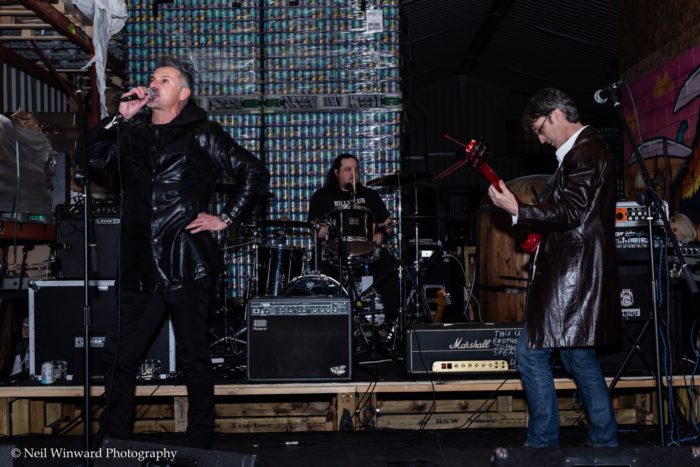 Gary is also part of what were the first band of the evening – Modern Family Unit (MFU), who kicked off proceedings with their sizzling slices of beat-driven power-pop, well-cut with a punkish edge. From the social-criticism-meets-catchiness of ‘Law’ (with the peaks and troughs of sound adding a well-paced whomp, great for dancing to, I might add) to the reflective resonance of ‘Shadow Theory’, MFU presented tracks delivering real messages with deft synchronicity. Gutsy bass from Steve Southern, along with power-driven live drumming from guest Andy Dawson– proved a combination capable of grabbing audience attention.

Their horror-tinged ‘Die Unbekannten’ is one of my favourites, fusing old German radio recordings with spiralling electronica which opens out into irresistible beats. Their enchanting ‘Top Of The Pops’ is catchiness combined with enchanting vocals from Nat G, whilst ‘Fool On The Hill’ provides a sizzlingly satirical take on Donald Trump. Hilton bristles with energy on stage, as particularly illustrated during the track ‘Marco Polo’… providing a performativity which also highlights a sense of fun; for this is a band (the duo of Gary and Steve, as well as a range of guests) that crucially don’t take themselves too seriously, but take their social message seriously. Considering they also treated the audience to their upcoming single ‘Idiot Box’, I’m sure there’s plenty to keep an ear (and eye) out for.

MFU were followed by Witch Fever, four women wielding wild washes of punk grunge with a real performative power. Rather than just rapid bursts of thrash, their tracks have distinct, dirty quality as they build up… emphatically delivered with insistent, agitated voice. Take the track ‘Carpet Asphyxiation’, calling out against the assumption that women should submit to what men want, highlighting the ability of the band to build up a soundscape and smash together both softer vocals for mood, and a shrieking edginess as the track progresses. This is particularly underlined for me in their popular single ‘Toothless’ with its anthemic line ‘you put the blame on me’ – biting back against victimisation and manipulation with acidic ferocity.

Witch Fever highlight what it is to be a band capable of creating both sonic and social drive – the sound and performativity of their music making it impossible for any audience member to leave untouched by its shaken-up-charm. Lead singer Amy waded into the audience, expressing an unfazed, anger-fuelled attitude which felt to me like many collected narratives of misogyny made resonant through musical art. A snarling, seething craft of cathartic noise crawling into the eardrums. There was a particular point in their set, in which the band were chanting ‘off with his head’ (in the track ‘Bully Boy’), and the crowd joining in, which felt like a surreal blend of past histories coming alive through hot new music. More please. 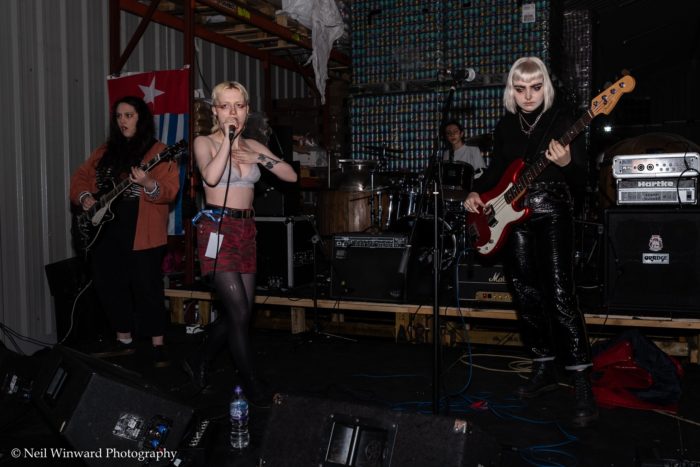 Membranes came next, legendary dark-punk infused rockers channelling a wonderfully weird energy which wields stories not just a society, but also the brooding moods and mysteries of the natural world. Having previously seen the Membranes accompanied by a choir and typically on a much taller stage which gives legendary frontman and bassist John Robb an almost aerial overview of the audience… I was interested to see how the dynamic would be delivered in a venue without the same elevation or backing singers. I wasn’t disappointed.

The band build up a seething core of sound which surged out into the room, John fizzing with energy as his frame darted and swayed, his eyes looking wildly into the mysterious distance this music takes you to – hence why the upcoming Membranes album (to be released early 2019) is highly anticipated. For this is the art of the Membranes, for me, melting open sonic soundscapes for the crowd to enter into.

It was a cold evening, but the Membranes quickly sussed the antidote was dancing, delivering track after track of thundering beat, bass, guitar and vocals ground into throbbing pulse. John voice veered over an introduction – ‘so you want to dance?’. Dance, I certainly did, swayed by the chant-like and subsequently enchanting ‘Graveyard’, elevated by an almost yodelling vocal cry of the chorus, as well as the dark jive of ‘Do The Supernova’ and the classic ‘Dark Energy’. A bigger PA would have obviously elevated their sound to its intended ethereal levels, but given the DIY nature of the venue, it has to be said that all bands worked brilliantly with the resources they had. 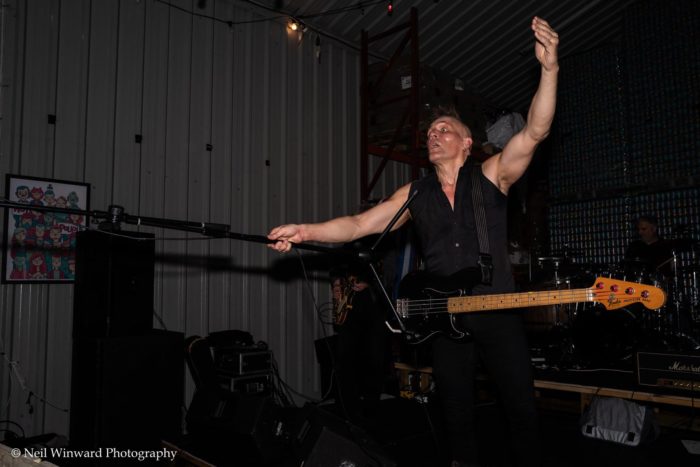 The Blinders were last on the bill, building a mood of electrifying anticipation, as an introductory track stirred up sensations over the speakers, talking of ‘Columbia’ (the title of their highly acclaimed debut album), goading and menacing. This is a band certainly capable of crafting sound like a driving force – and notably, there is a key eloquence to it, as well as intensity.

Johnny Dream -the painted persona of frontman Tom Haywood, stood slightly to the left of the stage, leaning into the hot bolt of drums and guitar, the smeared black around his staring, searching eyes oozing down like the weight of those wonderous drums. The beat builds thanks to Matty Neale, whilst Charlie McGough brings striking, unabashed bass. Honestly, the rhythm The Blinders manage to roll out is something else entirely, the type you can feel thundering, thickening under your chest as you stand to watch them. This certainly was the case for the opening scorcher: ‘Gotta Get Through’.

It was only shortly into the set however, when a scuffle broke out close to the front barrier. This was a point when The Blinders not only demonstrated their deftness as a band, but their ability to gauge and guide the mood of an audience –pausing to allow the issue to be dealt with, before gearing back up… filling the venue with even more gravitas. This highlights a band that are perceptive as well as powerful – and indeed, a set from The Blinders feels like the audience is being directly addressed, rather than just ‘entertained’. ‘Free The Slave’ and ‘Rat In A Cage’ have this effect on me especially. 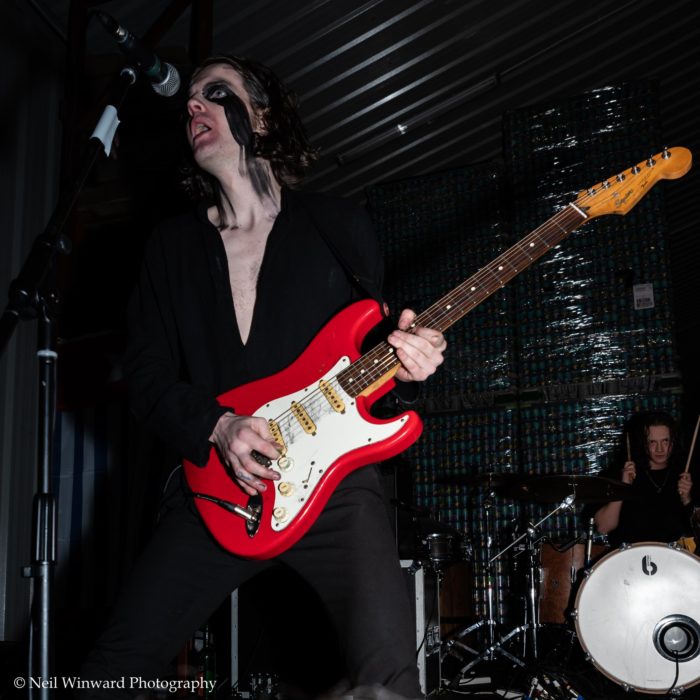 It has to be said, the mood for the rest of the night was anthemic rather than agitated, many in the crowd dancing and thrashing in wonderfully wild abandon… a hot sense of unity in a shared cause stirring underneath. I lost half of my coat in the pit.

A particular stand-out moment from The Blinders, for me, was the acidly eloquent ‘L’etat C’est Moi’ – grinding guitar and thundering drums building behind a vocal volley that emerged viciously expressive in a kind of bark: ‘I’ve got divine right! I’ve got divine right!’. Because The Blinders don’t just deliver sonically stunning material, they infuse it with political irony, social outcry and articulate rage. The incredibly anthemic ‘Hate Song’ provided an opportunity for a whole body of people to beat out their rage on a brewery-turned-dancefloor… and to leave the mood of the place feeling supercharged and frenzied with thought for the whole night after.

There were points of edginess to the evening indeed, the DIY nature of the staging setting the musicians a challenge. Given that the PA was only a limited size and the stage inevitably awash with surround-sound and feedback, The Blinders powered through some admittedly tense moments to mould music that was still determined and deeply moving; a live experience to remember. The surrounding metal sheets and piping even added to the intensity with its own resonant kind of ring, lending a real industrial feel. 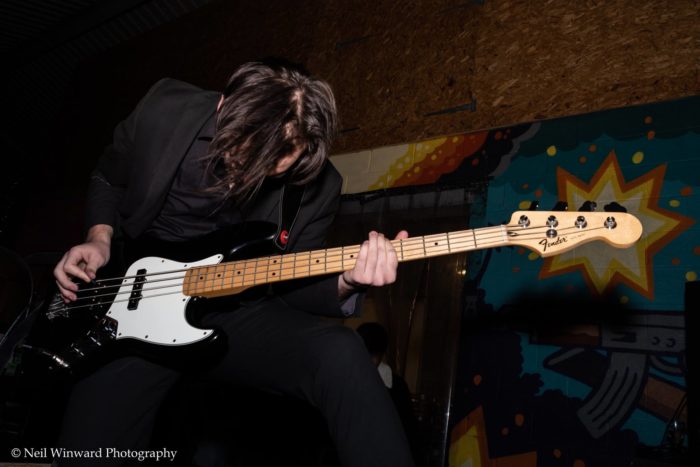 The Blinders topping the bill to me, underlined the ability of contemporary music to cut through the white noise of media ideals and make something meaningful. This was a resonant stand to raise awareness of two profound social issues – and what a way to do it.

Words by Emily Oldfield
Photos with thanks to Neil Winward Photography