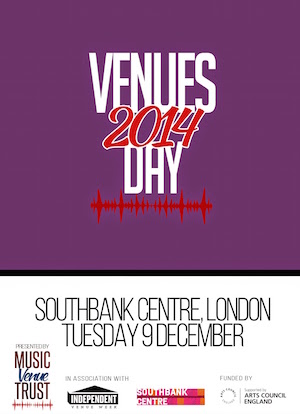 As the name suggests the Music Venues Trust, championed by Frank Turner among others, was set up to help protect the UK live music network. To that end they had a day earlier in the week exploring issues surrounding live music venues in modern day Britain. Louder Than War’s Ben Easton was there for us – check out his report below.

We all have our own first live music experience. That first glimpse into the world of rock ‘n’ roll all dripping with a mix of sweat from the walls and other people’s pints. It’s a rite of passage like losing your virginity, only with a lot less awkward silences. Personally, I saw The Rascals at Dingwalls when I was a greasy haired 14 year old and afterwards I wanted to don a leather jacket and smash a guitar up. Nothing else in my teenage years made me feel like that and it is something that I will cherish until the day I die. For some, it is the moment they realized they were a Rocker, a Mod or a Punk. They are probably the most important moments from one’s adolescence and, more often than not, they took place in the grimy yet enigmatic local venue.

However the live music venue we all know and love is a breed that is on the brink of dying out. On 9th December, at the Southbank Centre in London, small music venue owners, Members of Parliament, music industry agents and music lovers sat down to discuss where it is all going wrong for arguably one of Britain’s most precious cultural symbols: the live music venue, as part of Music Venues Day 2014. From Plymouth’s Tiki Bar and Grill right up to Inverness Ironworks, over 120 live music venues were represented eager to find out what can be done to save our live music venues from extinction.

Mark Davyd, Music Venues Day organiser and head at Tunbridge Wells Forum, NME’s Best Small Venue 2012, led the day by regaling the story of The Marquis venue, now the Floridita, a fine dining restaurant in Soho. He recalls, “About a mile from here, there is a restaurant called ‘The Floridita’. On the outside of it there’s a little blue plaque. That blue plaque says ‘Keith Moon played here in 1965’. Just to be clear, Keith Moon did not play the Floridita in 1965”. His impassioned speech about how the, now defunct, Marquis venue seemed to strike a chord with everyone in the room, who, unfortunately, are all faced with the same problems of redevelopment or even closure.

This is a problem known all too well and seen far too often up and down the UK and, in fact, it is estimated that 30 pubs close every week in the UK. Steve Tilley of Kilimanjaro Live / Sugarmill in Stoke made clear that there is 20% tax straight off the bat for venues, a number that is definitely too high for this sector.

Two of the days most interesting cases were that of The Fleece in Bristol and The Boiler Room in Guilford, both of whom have had a tough year with noise complaints, property development nearby and have faced up to £11,500 in legal costs. Dom Frazer, owner of The Boiler Room, said, “This has been one of the worst years of my life”. Once again, these are not just music venues that will always be there. These are businesses and people’s livelihoods at the risk of shutting down.

The event’s most heated panel was ‘Noise vs Nuisance’ in which members of the Noise Abatement Society and Chartered Industry of Environmental Health came under fire in regards to noise complaints and how the venue is supposed to deal with these. Alarmingly it seems that, in the case of The Boiler Room, venues are actually responsible for noise if new development takes place, despite how long the venue has been there and Dom Frazer suggested that “Noise is subjective”, which seemed to be the general consensus of the room. Towards the end of this panel, it was suggested that there should be steps taken to put in place “Complaint for Complainants” which proposes the idea that if a neighbour or developer makes a complaint about noise and there is no evidence to reinforce the complaint, the venue can make their own complaint about the neighbour or developer, which, again, went down a treat throughout the small venue community.

The day was not marred entirely by the problems faced but addressed what can be done to improve the small music venue circuit and celebrate how small music venues develop Britain’s most exciting and important exports; Artists. After talking to Nik Sharpe, owner of The Cookie in Leicester who have put on bands like Royal Blood and Wolf Alice in the last year, we agreed that although small music venues face some tough times, it is important to connect music venues together and catch people when they’re young so that they grow up with the venue, 14+ gigs for example. There has been far too many cases of teenagers ignoring their local live music venue and going straight into the world of warehouse parties and concrete laced E’s. Every gig is an event, not just those on Monday or Tuesday nights. We also chatted about how successful acts need to go back and play these small venues again. “It’s such a simple task in the grand scheme of things that benefits not only the venue, but the support bands and the local kids. But once they hit the big time, they fuck off” Sharpe said and he’s completely right.

By the end of the afternoon, it was agreed that two main steps were to be developed in the near future: Tax Breaks from 20% for live music venues and a Music Venue Union connecting every willing venue together, creating one unified voice. Fantastic stuff!

Small venues are the lifeblood of the British Music Industry and the breeding ground for some of the world’s largest artists. Each venue is special and means something to someone. Unfortunately, times have changed and no-one can just splash out two hundred grand on a drug fuelled UK tour and a music video with a monkey and boomerang in it but all other sectors of the music industry have adapted to the internet age and low physical record sales so can the music venue circuit. It was an extraordinary eye-opening day and one that, although disconcerting at times, was filled with positives and lots to take away for the future. Maybe all we need to do as music lovers is scrawl around our wallet for a couple of extra quid, head down to the local live music venue and go at it like we did when we were 14… Seems simple enough.

Also check out our interview with Frank Turner about the music venues trust here.

The Music Venues Trust can be found online here: musicvenues.org.uk. They’re also on Facebook and they tweet as @venuetrust.

All words by Ben Easton. This is Ben’s first piece of writing for Louder Than War.