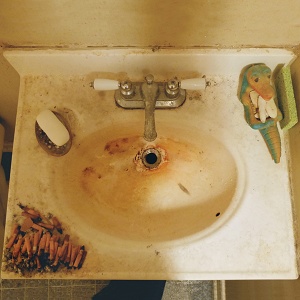 There’s no doubt, according to the PR info that Stephen Tanner (aka Music Blues) has had a bit of a lousy time of things. Premature birth, depression and the death of a close friend have all taken their toll on him and are reflected on Things Haven’t Gone Well. By the sound of things, they haven’t.

It’s a strange album, which is often good but it’s hard on the ears too. There are no hooks as such, in fact much of the time the album sounds like a sound-check. Guitars strut single reverberating notes against a slow occasional drum clash for what seems every track.

Opener 91771, maybe gives a little promise. A momentous start as guitars rip and drums pound, the album starts with a dramatic opening, if a little long. The same theme continues into second track Premature Caesarean Removal Delivery and the album follows almost the same track throughout.

There are occasional breaks, Teach The Children is a peculiar affair with treated vocals against a backdrop of a blues track which is almost undecipherable. It starts to become quite fascinating must as it fades out after fifty seconds. We’re then back to the formula’ of lone guitar notes with Hopelessness And Worthlessness. Maybe it’s a sign of my age, but I just don’t get ‘it’.

I’m wanting to like the album, and really trying. I can imagine it as a backdrop to a psychological horror movie, maybe the makers of American Horror Story should have a listen. I can imagine dismembered bodies in a dark cellar with a masked and white-cloaked madman soaked in blood not his own. There’s a guitar solo on Trying And Giving Up which breaks the monotony before Great Depression continues.

Perhaps the added complication is that much of the album is instrumental, not necessarily a bad thing but there needs to be more a hook in several of the tracks, and again it’s another shorter interlude track Death March which gives light.

Tanner has to be applauded for his decision to make this album, but it somehow doesn’t quite ‘click’.