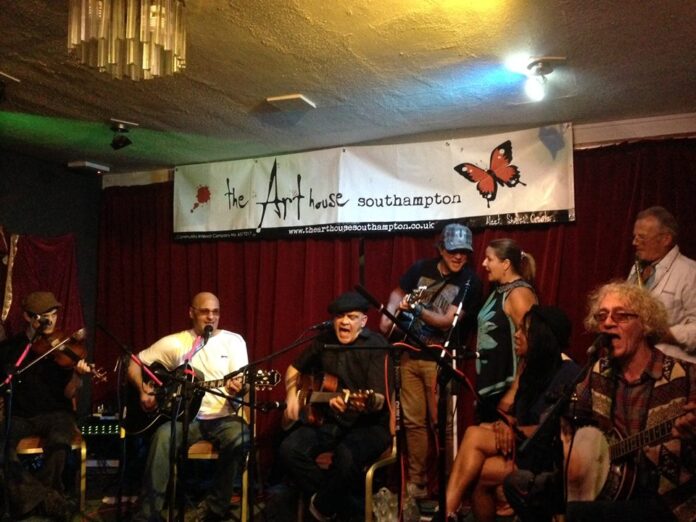 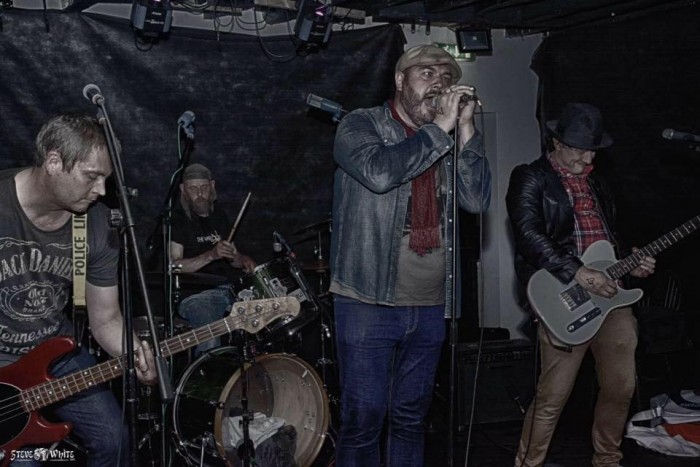 Hard-drinking Southampton bands play home and away fixtures and provide much more than just a welcome alternative to a certain festival, says Ged Babey.

FUCK OFF GLASTONBURY! I don’t want to hear another word about the over-hyped, ridiculously expensive, corporate-love-in, BBC-promoted fucking shite-fest! Biggest crowd turn out? Lionel Ritchie??? Fuck me. Now That’s What I Call Alternative!?? (Sleaford Mods have affected my writing style I’m afraid and I know some cool bands played smaller stages and there was this …but Fuck off with the BBC / Guardian / media overkill wontcha!)

The alternative is to support your local music scene.  See some decent bands for a fiver / sick squid and if you’re as lucky as I was you’ll see some tremendous, life-affirming music and quality songwriting in good company.

The Barn at the back of the Milton Arms in Portsmouth is back and Under New Management and Punk Nites have returned (on a monthly basis – see local press for details) and the first featured Second Hand Citizens; sounding harder, tighter and faster than before and almost out-growing their self-professed ‘Best Worst band’ status. The blinding flamboyant-thug rock ‘n’ roll of the Bermondsey Joyriders topped the bill. Looking flash and hammering out a punk rock, pub rock, glam rock amalgamation which tips its hat to Thunders and Brian Jones in song and the Feelgoods, Slade and Pistols in essence. They were a revelation. Rock ‘n’ roll elders showing ‘the kids’ how it should be done.

In between Southamptons the Flying Alexanders, a band I’ve seen countless times, living legends in this part of the country were on top form. They rarely put on bad show to be completely honest. I’ve seen them so paralytic they can barely stand and ravaged by man-flu and still they play like heroes. Quality Time is a drinking man’s anthem and should be on every pub jukebox that’s left in the UK (probably about five at the last count). Guitarist Perry Flatt, (imagine a cross between Dudley Moore and Johnny Thunders in Hancocks hat) has been dabbling in country and blues of late, but it’s not blunted his rock ‘n’ roll edge. Paul from the Doghouse Boat Boys joined them playing some  manic honking harmonica adding to the madness with some pizzazz. Their original songs are tremendous, but covers of Born To Lose and Search And Destroy were so awe-inspiring that even the band looked surprised at how good they sounded.

The next day and Alexander’s core, Perry and Big Jon, played an acoustic set  prior to, and joined Mushami, guesting on a couple songs for a more sedate but no less enjoyable night at what I previously described as a “knit-your-own-museli arty-farty Café” called the Art House. A slightly incongruous venue for them but chosen for its no-talking-during performances rule. (Although not strictly kept to by some, much to the annoyance of Southampton scene veteran Arnie Cottrell… I only mention this as he was extremely complimentary about Richard Chorley’s songwriting, keen to work with or help out Mushami. The pre-punk roots generation being impressed with younger upstarts was good to see.) Another veteran, legendary sax player Ronnie Taylor made a triumphant guest appearance on the last two songs making main man mush Rich “…feel like Springsteen up here”.

Mushami’s songs are crafted tales of local folk-devils & heroes, all of which are set in the different boroughs of Southampton. All sung with conviction and passion as they are stories lived through by the band and their leader. 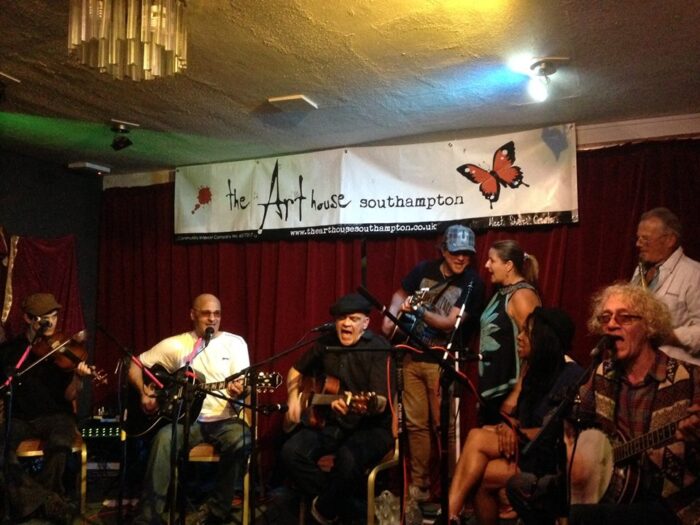 Frankie Fraser’s Smile is set in the jails of the late 70’s, Jezzamine a love song to a girl from nearby Shirley, Terry O’Brien Said, about a young punks visit to London, buying some creepers and ending up getting a beating and the footwear which cost a weeks wages, nicked by a gang of Teds. Last Tango In Chapel? Well, every song has a story. Once recorded they will sound like a beautiful melding of the Pogues and the Faces, with banjo’s acoustic guitars, violins, mandolins and penny-whistle.

The original 3 piece Mushami looked like a motley bunch of retired hooligans, but now with an 18 year old multi-instrumentalist called Meredith providing some youth, backing vocalist Mariea adding a touch of glamour & femininity, they are almost complete. (They don’t have a drummer, but it’s debatable whether or not they need one.)

The only cover version they do is a quite remarkable slowed down version of the 1977 Jam song In The City, when after the line ‘I hear they now have the right to kill a man’ the music stops dead and Mariea calmly says newsreader style, “There have been over 1400 deaths in police custody since 1970  and not one single police conviction” before it resumes.

The climax of the set is a song which sums up everything Mushami are about, Hymn For The Mushes. With Ronnie’s Sax and Stratz’s banjo (TMTCH’s Paul absent on mandolin) it sounds like the best buskers you’ll ever hear playing Mott The Hoople. The refrain stays in your head for hours afterwards (…and even when you wake up the next day) and criminally it’s not available in a recorded version yet. (There is a ‘problem’ with missing mastertapes apparently…)

Which means the only way to hear it is to see them again live.

They might sound like mere ‘local heroes’ but Sprinsteens tales from Nebraska and the Clashs’ stories from the Westway resonated worldwide.  By the same token, Mushami have the potential to be appreciated by far more than a local audience.

Mushami and the Flying Alexanders play the Southampton Old Punks Reunion gig at the Joiners on Saturday 18th July  where there will be a collection for  Sean Hensford’s daughter Jess, details here. Please give if you have the funds & the heart. Thanks.

With thanks to Steve White for the Alexanders photo and Debbie Armstrong for the Mushami.