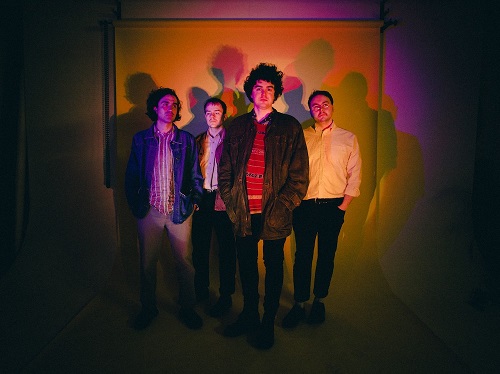 Art-rock band Mush announce their return and a new album with new song Get On Yer Soapbox.

The song is taken from the band’s forthcoming third album, Down Tools, which has been slated for release on Memphis Industries in July. The album continues much in much the same vein as their last album, Lines Redacted, which made our top 100 albums of 2021, but expands in sound whilst also taking a step back from the observational lyricism of their previous work.

For the album, singer Dan Hyndman stated that many of the lyrics were improvised in the studio, along with much of the guitar work, resulting in an even more abstract set of songs. On their new song, he says, “‘Get On Yer Soapbox’ is a righteous wig-out number, like “Alternative Facts” but with more cowbell. All the solos are improvised and I very much doubt I will ever be able to recreate them live, you can hear the track going off the rails which is something I’ve found exciting on records. Lyrically again it’s a kind of re-purposing of an old idiom which I like to do. Generally being ‘on your soapbox’ is considered to be a bit of a slur but I think a bit of self-righteousness is warranted from time to time, especially with the shower of shite we’re dealing with”.

Check out the song Get On Yer Soapbox below: