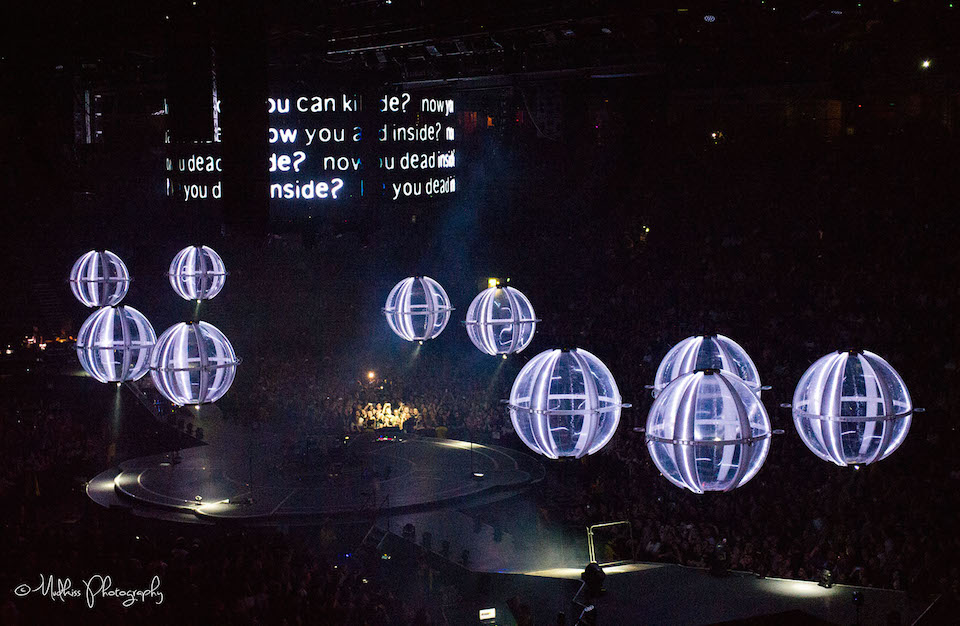 Muse have been mixing their blistering rock guitars, operatic arrangements with occasional electronica and classical piano for 21 years and while I’m conscious of Muse and a lot of their music I couldn’t call myself a fan; that isn’t a concern tonight as this is about the experience and the event as much as it is about the music. Modesty is not evident tonight and even though the show opens with a delicate ballet performed by illuminated spheres the spectacular light show soon accelerates and continues to ascend into an extravagant production that provides constant entertainment.

Muse open the show with Drones its musical lunges and machine gun rhythms are a powerfully bombastic and perfectly executed start, making your heart race and sets the tone for the night. Drones (the album) is based around such subjects as a global belligerence, warmongering and indoctrination and the story arch is played out throughout the night on a number of visual levels. The extended in the round stage with is 360° spherical centre provides everyone a chance to experience almost all the elements at some point from a premium perspective. High above the band the wrapped around a centre console huge screens show video, digital imagery and film, direct from the multitude of cameras around the stage. Projection screens fall and rise along the elongated performance space again displaying visuals that at times are a direct interaction with the band as they are puppet-ed or recreated in pixels or lights. 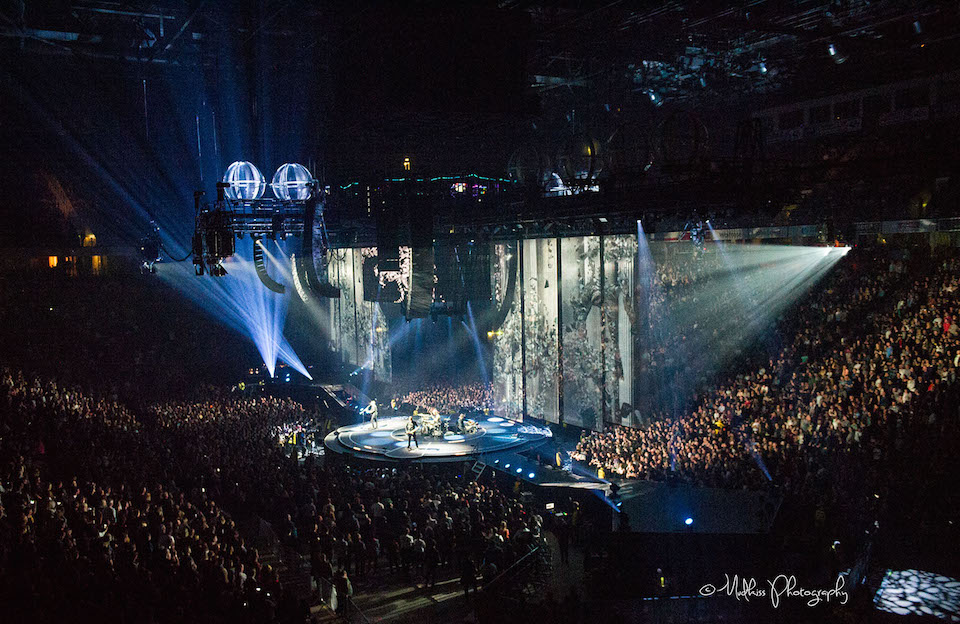 After three tracks from Drones we take a short trip back to Origin of Symmetry with Bliss its synthesizer harmonies and driving bass line almost swirl around Matt Bellamy’s beautiful melodic vocals. It’s lilting outro is extended as the giant lit spheres glimmer and glide above our heads. We are back with Drones with an emotionally gripping Dead Inside On the outside you’re ablaze and alive, But you’re dead inside imparts Bellamy as his rhythmic guitar works magically in unison with Dominic Howard’s stop start powerhouse beats.

Nearing the middle of the set the band launched into the intro to Hendrix’s Voodoo Childe switching into Supermassive Black Hole and the audience that hadn’t really been subdued in the least kicked up their cheers of appreciation. The entire venue singing in unison and even those on the near vertical gods were defying gravity jumping and dancing along. It is not just amazing music being thrown at the crowd as giant balloons are bounced around the stadium they one by one pop showering those under with confetti the final one is edged closer and closer to Chris Wolstenholme, who using his light decorated bass bursts it to thunderous applause. Muse produce music with such serious themes at their heart, unexpectedly tonight this huge scale show is full of warmth, exuberance and humour. 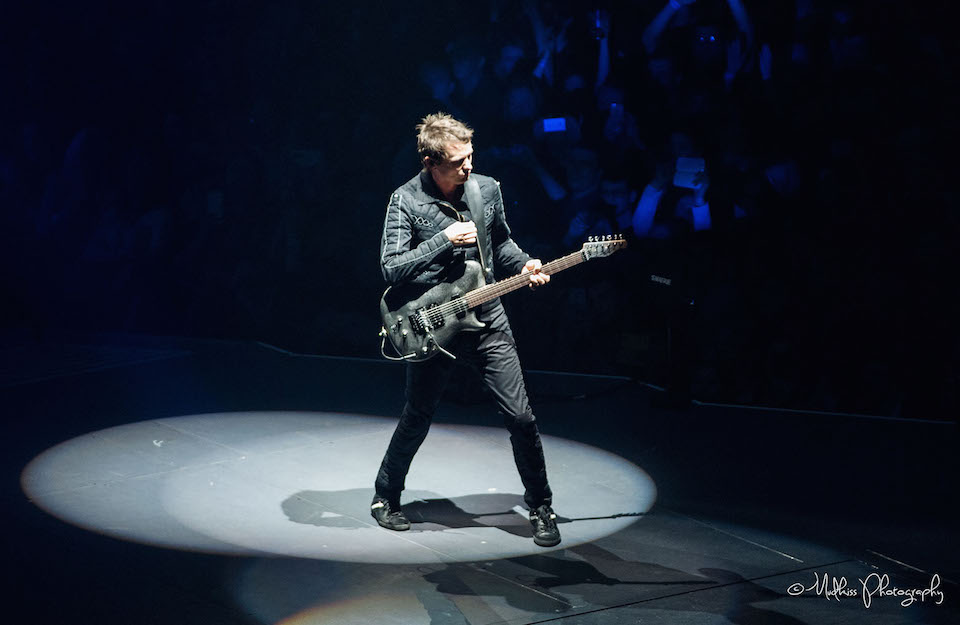 Rising up from the floor a full sized piano from which Matt Bellamy provides a robust version of Feeling Good that delivers a new flavour to tonight’s set list and while it seems very much loved by a lot of the crowd, it is Time is Running and Uprising that take the prize for most audience appreciation the escalation of the sing along reaches a high as during the final We will be victorious. There is an almost seamless break between the end of the set and the start of the encore as the night ends with three tracks Take a Bow, Mercy and finally returning to Black Holes and Revelations for Knights of Cydonia; which on paper seems a bit overcooked. In an arena with all the lights its charging 6/8 drumbeat, mariachi embellishment’s, whip cracking guitar riffs and Bellamy’s deadpan falsetto statement of intent is, quite frankly inspired – a tremendous end to a night made for superlatives.

While I didn’t make a beeline for the merchandise stall, I can certainly say that I’m a fan of what Muse provide as a live show it is certainly first-class in terms of theatricals and remarkably powerful at stirring up the emotions it is also a demonstration of skillful musicianship that can be very much appreciated and very much enjoyed by everyone fortunate to attend.

Muse will also play The Pyramid Stage when they headline the Glastonbury Festival on Friday 24th June 2016.

While some nights are sold out some venues do make a small amount of tickets available on the day. We advise contact the venue or head to the bands official website for ticket information and links; you can also find up to date news, videos and an official store via the home page.