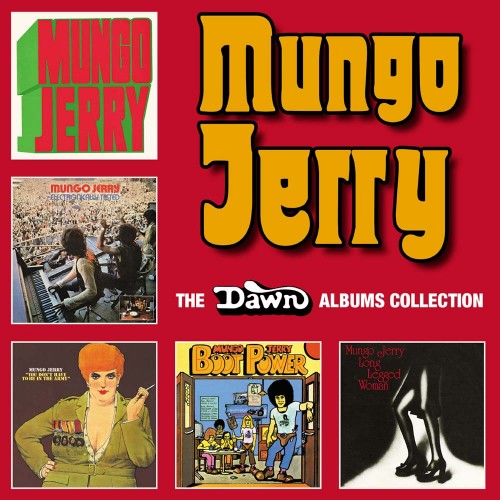 5CD boxset containing all of Mungo Jerry’s Recordings for Dawn Records….LTW’s Ian Canty recalls one of the strangest Pop phenomenon of all time………..

There’s an old phrase that goes “the past is a foreign country” that I believe emanated from the book The Go-Between (yes I did look that up, I admit it!). Looking back to the Rock/Pop scene in the UK of 1970, I would upgrade it to being another planet. It was without doubt an odd time. A new decade began with the previous decade’s standard bearers the Beatles lumbering relentlessly towards their inevitable split. Psychedelia was pretty much a spent force and Progressive Rock steered many a band towards albums rather than singles. The previous few years had been marked by a move backwards to the basics of Rock, spearheaded by the Band and Creedence Clearwater Revival. All of which left UK Pop in a bit of a confused state.

Enter a hugely side-burned man with his raggle taggle band of confederates. Ray Dorset had began his musical adventures in a band called Good Earth during the mid-60s. A re-jigged version of that band’s final line up became Mungo Jerry. After a couple of flop singles (Mungo Blues and Maggie, both included as extras) they first made a big mark at the Hollywood festival (actually held in Newcastle-Under-Lyme) where they went down so well they were asked to play a further set on the next day (three tracks from that performance at segued as a bonus on disc 1, the chat between showing Dorset to be a right cheeky potty mouth!). In The Summertime was released shortly afterwards, conquered the charts and from then on there was no looking back for the Mungos.

Now if people look back on Mungo Jerry at all today it seems to be as a bit of a joke, some sort of dopey looking no cred one trick ponies from the past to only be unearthed whilst wearing platforms and flares “ironically”. In fact they were far from one hit wonders, being probably the most successful pop act in Britain from 1970 to 1971, scoring two number ones plus a couple of other big hits. You could also add two big selling albums into the bargain. Also they weren’t without journalistic praise as none other than the trendy New Musical Express hailed the first album as “The Return Of Entertainment” among other positive reviews in the other inkies (Melody Maker even named them as the best new band of 1970).

Album one arrived in 1970 bagged up in a 3CD sleeve just before Mungo Jerry began to make a breakthrough into the singles chart. Though characterised by Dorset’ distinctive vocals which at times resemble Vic Reeves “Club Singer”, there was also either a considerable debt to/amount in common with the Bonzos’ Psychedelic Trad Jazz to consider (the kazoo is deployed liberally and pre-Rock influences abound). In their heady Skiffle and Folk Rock concoction there is also a little bit of Bolan’s early version of T-Rex in there too, with on occasion “nanny goat” vocal inflections and similar down-home acoustic vibe. I also found myself thinking a little of the early Fugs Folk-smut here, bearing in mind the often near the knuckle nature of Dorset’s lyrics.

The eponymous debut was full of, on the face of it, simple laidback charm. But there was much more going on here than meets the eye. Behind the casual façade Mungo Jerry were pretty canny players who knew how to kick up a storm with the minimum of fuss and indeed instruments. They basically had two modes of attack: easy going skiffle-inflected Blues/Country and full pelt Rock ‘n’ Roll that owed more than a tad to the genius Little Richard. Though always verging on self-parody, there’s an undeniable joy in Dorset’s rough and ready voice and the sepia-toned olde worlde backing fits it to a T.

The old Elvis classic Baby Lets Play House is given a fresh blast of vim with Jerry’s patented Garage Skiffle even managing to squeeze in a bit of Surfin’ Bird style gobbledegook. Anti-war number Peace In The Country delves into the same milieu as Country Joe And The Fish and the C&W-tinged My Friend unleashes some smart kazoo mayhem. But perhaps the best track on the whole LP is See Me, which works up from a sparse piano and banjo backing to a full-blown, charmingly ramshackle racket with a very “Chuck Berry Gone Punk” guitar break! Dipping into an array of musical styles but always turning out something unique, Mungo Jerry the album is still a delight to hear today.

By the time of the cheekily titled Electronically Tested (taken off of a condom packet) Mungomania was running wild. This record found the band at the peak of their powers and was as a result the biggest seller of the four here. In The Summertime had by then become a massive hit, this easy-going ode to hedonistic sunny days soon ingrained into the nation’s psyche. It turns up as track three on this record, showing Jerry’s easy-going mind-set (no need to have the smash first up).

Elsewhere Baby Jump, which also hit the top, spot is as raw a Rocker as anyone was penning in 1971, bringing to mind the mayhem of Screaming Lord Sutch and was a possible influence on the Cult’s Wild Flower. You Better Leave That Whiskey Bottle Alone has great warmth, evocative Folk Rock at its best, but the wonderful last track on the original album Coming Back To You When The Time Comes must take pride of place – a tear-stained, moving epic. Electronically Tested fulfils the promise of the first album and takes it up a notch or two.

The third album You Don’t Have To Be In The Army, though enjoyable enough in itself does seem to represent a bit of a stasis. Repeating the musical recipe of the previous two collections with its combination of goodtime skiffle/country/folk seasoned with raw rockers, it did not sell well and the singles barely dented the charts. That is not to say it was all bad, but the contents were seeming a little familiar after two albums in similar style. Even so, the brutal Give Me Love is a hard rockin’ delight and Simple Things has the kind of smooth Folk groove that recalls the Pogues in their more reflective moments. Overall it isn’t quite the equal of the two preceding collections, though enjoyable enough when taken singly. This disc has a peach of a bonus track is the wild guitar Rocker Outskirts Of Town and another extra Shorty George could easily be an old Blues 78 from the US.

All of which prompted a rethink on LP number four, Boot Power. Housed in a cartoon sleeve depicting Dorset and the band with “Clockwork Orange” style cod-pieces and toting blades, the image seemed to be calculated to entice fans of the Glam Rock bands, who appeared to be stealing Jerry’s thunder. Something had to give with Dorset looking to broaden the band’s appeal. Thereafter the music had changed, with a firmer guitar/bass/drums set-up trumping the DIY washboard and kazoo concotions for the most part. This reshuffle led to a fracture in the group, with Dorset effectively becoming Mungo Jerry at this point much like Alice Cooper. The other two mainstays Colin Earl and Paul King left to form the King Earl Boogie Express.

The reconvened version of Jerry features on Boot Power and despite the behind the scenes ructions it did give them a new lease of life and the new approach paid dividends almost immediately with the great Lady Rose single charting in the top five. It probably would have went to number one but for the Public Prosecutor’s Office sticking their oar in and banning it because of Jerry’s version of the Trad Arr Have A Whiff on Me which Dorset had altered to mention cocaine. No matter – the Mungos were still big news.

The title track itself does as good a job as any in stating the new, improved MJ approach. Though it bears a little resemblance to Jefferson Airplane’s Somebody To Love, the full band format provides some thumping Glam Rock thrills. If Going Down The Dusty Road harked by to the past the catchy flipside to the Lady Rose single, 46 And On, curiously seems in the same mode as Too-Rye-Ay era-Dexys in its Soul Folk swing. Sweet May Jane couples Bubblegum Pop with druggy lyrics and She’s Gone is an infectious nugget of Soulful Pop/Rock. Overall Boot Power was a satisfying change of direction for the band.

By the time of their last album Long Legged Woman in 1974, the game was almost up for Jerry in the UK charts (though they would go on having hits overseas). Despite that it featured three hit singles including an excellent English language version of Jacques Dutronc’s Et moi, Et moi, Et moi, in Alright, Alright, Alright. Though the LP was the band’s last hurrah, I Don’t Wanna Go Back To School is neat anti-establishment Soul and No Girl Reaction was as heavy as they got, even slightly Stooges-tough. A long way from In The Summertime, but Summer’s Gone wasn’t, being a near copy and a sign of desperation for that illusive hit. Their last two UK charting records were Wild Love (which appeared an update of their original sound for the Glam years) and the rocking piano Pop of the title track. Though a little haphazard, Long Legged Woman Dressed In Black has a fair bit to recommend.

The Dawn Albums collection is a look back at a largely forgotten slice of UK Pop history. Mungo Jerry, like them or not, set their own stamp on the first couple of years of the 70s in large print, being hugely successful. They did this by developing their own individual style that although appeared to cherry-pick a little from two notable forerunners in the Bonzos and Tyrannosaurus Rex was quickly forged into something that was undeniably their own sound. Housed in a box with a great sleeve note from noted writer and leader of the Argonauts Alan Clayson, The Dawn Albums collection will surprise more than a few people. Mungo Jerry were ratty, chaotic and full to brimming with good time warmth with tunes to match. A band fully deserving of reappraisal.