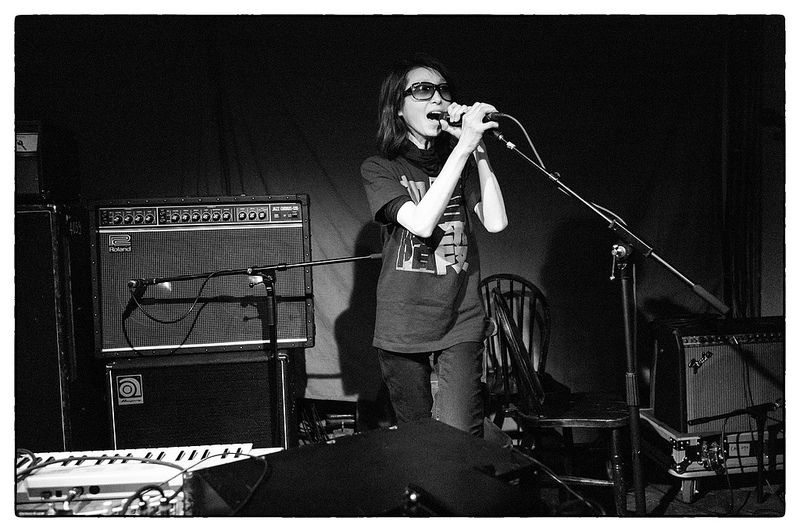 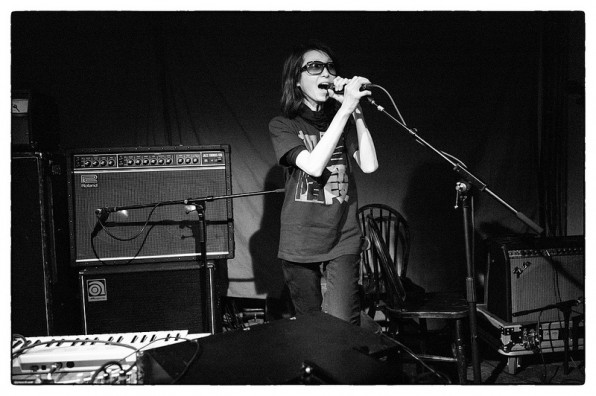 Some of Japan’s most uncompromising musicians landed in Dalston, east London, for a two-day free-for-all of feedback, white noise and screaming. Paul Margree took it in the neck for Louder Than War. All photos © Fabio Lugaro.


A slim, slight woman fiddles with her microphone. She puts on some huge, bug-eyed dark sunglasses. Without any introduction she lets rip with a frenetic and intense screaming monologue. It’s extremely loud and sounds like a child screaming in pain. I can’t tell if she is speaking Japanese, some other language, or simply screaming wordlessly. After 30 seconds, a discordant buzzing starts in my right ear which continues for the 20 or so minutes of the performance. I’m really, really freaked out.

Ladies and gentlemen, this is JUNKO, one of the founders of Japanese ‘Kings of Noise’ Hijokaidan, and one of the highlights of this two-day festival of Japanese experimental music which took place in London this weekend. Organised by Korean guitarist Katsuyoshi Kou, Multiple Tap’s bill offered up a veritable cornucopia of abrasive, noisy, confrontational, minimal, psychedelic, angular and distorted delights for the aficionado of underground sounds.

All in all, Kou has gathered around 20 of Japan’s most challenging and interesting experimental artists, promising that all of them will perform on both nights – a relief as I only have a ticket for the Saturday – although in different configurations. Quite what it means is anybody’s guess, but the result is a cramped bill with four hours of intense craziness chopped up into chunks of between 15 and 25 minutes.

No-input mixing desk guru Toshimaru Nakamura is up first, playing in a duo with Katsuyoshi Kou. I saw Nakamura first back in 2001 and I remember his bursts of white noise and static scouring the inside of my skull as if they were wire wool. The duo’s set is similarly bracing here, with Kou’s glowering thunder clouds of guitar rolling over and around Nakamura’s enveloping white noise.

Astringent stuff, this, and an ideal appetiser for PAINJERK’s visceral noise assault. Described as a ‘one man sonic army’ PAINJERK, aka Kohei Gomi, gives us a masterclass in harsh noise, perfectly controlled yet wildly anarchic. After an introductory section that sounds like an avalanche of giant, masonry-filled dustbins, Gomi hits us with a jagged, full on aural violence that leaves us feeling brutalised and beaten. In a good way, of course.

Punch drunk as I am, PAINJERK is just the jab that softens me up for the brain flaying blow to the forehead that is JUNKO. She is, quite frankly, awe inspiring and terrifying. “She has a voice of great intensity” says her biography in the festival guide. They’re not wrong.

Blimey. It’s not even 8.30pm and I’m reeling. I elbow through the crowd to grab a soothing cup of peppermint tea, getting back in time for guitarist Tetuzi Akiyama’s linkup with sound artist Ken Ikeda. I’m a fan of Akiyama’s glistening, clotted guitar – in particular, Respect, his 2013 duet with Jeff Gburek, a wonderfully still and ruminative album that’s like an icy landscape on a cold, clear day.

Akiyama plays electric here though, the volume and distortion giving his playing the quality of white hot clusters of barbed wire. Unfortunately the sound levels are iffy, so Ikeda’s retro futurist synth washes are all but drowned out – a pity for what promised to be an unusual and engaging collaboration. 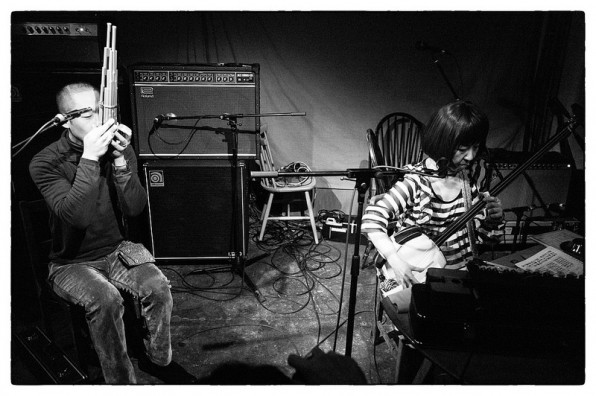 There’s less noise and more headspace in the next couple of twosomes. Yumiko Tanaka and Ko Ishikawa work with traditional Japanese instruments – Ishikawa with the Sho, a small bamboo mouth organ, and Tanaka with the three-stringed Shamisen and the Taisho-Koto, a stringed instrument with a typewriter-style keyboard. They play an elegant and jarring set that combines elements of Japanese traditional music with free improvisation. Ishikawa’s Sho lays down a bed of chilly, wheezing drones, while Tanaka strums, plucks, sings and whispers. I really dig it, yet applause seems muted.

I’m so chilled out by Tanaka and Ishikawa’s mantra-like playing that I drift to the bar and completely miss Takahiro Kawaguchi and Makoto Oshiro’s set, an exploration of fans, toys and other sound-making devices. It seems popular though, and I even catch Yumiko Tanaka, fresh from her performance, gleefully recording the whole thing on her phone while standing on a chair at the back.

I’m starting to feel a bit tired by this point. In particular, I’m regretting my decision to neck a beer instead of a double espresso during my bar break. Fortunately Katsura Mouri’s turntable wrangling puts me right back on track. A clip round the ear for vinyl fetishists everywhere, Mouri wreaks havoc on her wax, jamming the stylus of her battery operated turntable into her platters resulting in some great tearing and buzzing sounds (the machine is howling in pain perhaps?) having previously booted another turntable across the floor in disdain. Stick that up yer discogs, record collectors!

Next up: the distinctive afro and flares of Makoto Kawabata, the psychedelic dandy who spends most of his time worshiping at the altar of guitar histrionics in Acid Mother’s Temple. It’s a solo show tonight, but, not to worry – a short intro of bowed drones soon gives way to volcanic shredding, Kawabata deploying his trademark play-everything-with-both-hands technique while both feet – exquisitely shod in black cowboy boots – stamp on a variety fuzz and wah pedals.

Still buzzing from Kawabata’s strings of love, my karma is knocked well and truly off balance by the penultimate act of the night, three-way collaboration between multimedia noiseniks Doravideo and Atsuhiro Ito and performance artist Miho Wakabayashi. It really does nothing for me, an uninspiring juxtaposition of digital noise, light installation and striptease. 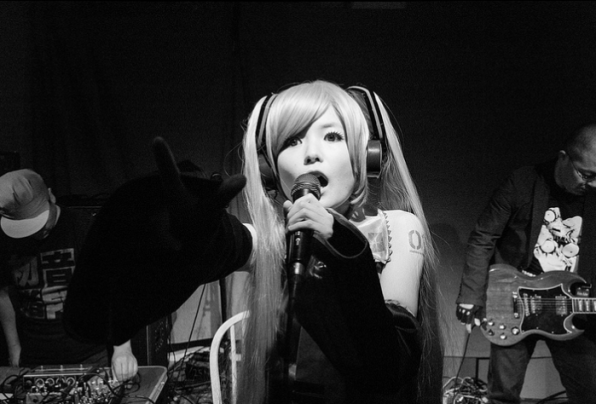 Fortunately the world is set back on its axis by Saturday’s headliners, (above), an exuberant, satirical and deafening three-piece made up of JOJO Hiroshige (Hijokaidan), T. Mikawa (Incapacitants) and virtual character, or ‘vocaloid’ Hatsune Miku. The music generally consists of Japanese pop backing tracks, to which Hatsune Miku sings along (or mimes, or both), which is then demolished by Hiroshige and Mikawa’s snarling guitar and howling noise.

It’s absolutely bloody fantastic, made even better by the presence of two Velvet Underground covers – Sunday Morning and Femme Fatale – rendered in a horrifically saccharine style and then summarily butchered. Through it all, Hatsune Miku stands on a chair, bright blue pigtails tumbling over her shoulders, waving to the zonked out audience and singing her pretend heart out. Is this real, or just a fantasy? It’s not always easy to tell. Hatsune Kaidan are many things at once, celebrating melody while endorsing the power of noise to undo everything it stands for, loving pop music and a hating of the vacuous culture that breeds it. It’s a fine choice to round off this unhinged and blasted carnival.

Multiple Tap isn’t the first time that the Japanese underground has come to London. Pioneers such as abstract noise overlord Merzbow have been visiting London since the 1990s. In 2001 the Japanorama tour introduced key figures like Otomo Yoshihide and Sachiko M to British audiences. And just last year I can recall great London shows from outfits like Keiji Heino’s Fushitsushi, Acid Mothers Temple and Otomo Yoshihide.

Seen in this light, Multiple Tap is less of an introduction to the hectic chaos the Japanese underground, and more like a celebration of it. But this is no bad thing. Japan has one of the richest, most varied and inspiring traditions of experimental music in the world. Multiple Tap is a very special occasion, one worth savouring.

~
More of Fabio’s photos from this show can be found at this Flickr page.

All words by Paul Margree and all photos © Fabio Lugaro. More work by Paul can be found in their author’s archive. He writes about experimental music at We Need No Swords. Or you can follow him on Twitter.

The Astronauts: In Defence Of Compassion re-released – Album review

July 1, 2014
We use cookies to ensure that we give you the best experience on our website. If you continue to use this site we will assume that you are happy with it.Ok