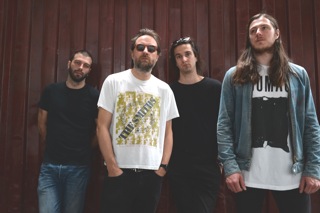 Belgian producer and DJ, Mugwump performs an about-face with a new sound and live show with his band and unveils the first extract of his second album Drape, due for April release.

No Trepidation is a fast-paced post-punk/electronic hybrid and a punch in the face of conformity, formatting and self-censorship.

The result of nine months locked up with musicians Stephane Fedele (bass), Thomas Stadnicki (guitars), Lukas Melville (drums) and a series of live shows in Belgium, second album Drape fuses the electronic with an occasionally heavy rock feel and outstanding lyrics, all topped off with a French-Belgian-tinged vocal and lyrical topicality. Music-wise it spans a breadth of influences from the Interzone between Post-Punk, Indie Pop, Psych and Noise while Geoffroy Mugwump
lays down conscious, parlando-style, lyrics over nine songs “soundtracking our torments in the Age of Laissez-Faire and Aestheticisation”.

Drape is the follow-up to 2015’s debut studio album Unspell, which boasted many guest vocalists, garnered media plaudits across the board internationally and was supported with live appearances at Benelux, French, UK and Dutch festivals and venues.

Taking it further and morphing into a full live band with new members, Mugwump released the Metempsycho EP in November 2016 on which Geoffroy made his singing debut. Driven by this live band experience, Mugwump’s new album Drape is set to be released in April 2018.

In addition Mugwump runs his own Subfield label, together with indie powerhouse !K7 and continues to break the mould of his genre-defying output, straddling the divide between indie and electronic.