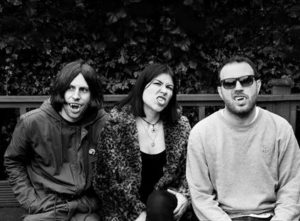 August 24th sees the release of the hotly anticipated debut album from London three piece Muertos. Following the release of their acclaimed debut EP, Muertos return with their vital new creation; ‘Suck It Up’. The LP will be released via Roadkill Records and will be celebrated at The Shacklewell Arms on August 24th.

Formed in London, the song writing duo of DeAnna Avis and Marc Crane bonded over their mutual love of cult horror movies and classic psychedelia. Avis hails from Querétaro, Mexico, and grew up in a musical family playing from an early age, while shoegazer Crane from Essex is a comic-book artist outside of guitar duties, lending his creative hand the bands cover-art and aesthetic. Finally, Tom Lewis supplies the relentless drums over the fuzz and distortion.

Across the eleven tracks Muertos run the whole gamut of sounds with full on fuzz and feedback with ‘She Is The Crawling Eye’, with blasts of noise mixed with the toned down and muted gorgeous vocals of DeAnna Avis (‘Medicated 099’). Follow up ‘Spin Master’ is a full on celebration of noise and 100mph garage rock, whereas ‘Corazon’ is a welcome ease up in the proceedings. Albeit with it’s Mexican influence and sultry vocals, it wouldn’t look out of place in the Tittytwister! ‘Little Rabbit is a full on racket replete with caustic guitar solo. ‘Devastating Fool’ is another slow track like ‘Corazon’, but with a more romantic slant rather than sleaze.

Final and title track ‘Suck It Up’ takes Muertos’ vintage garage sleaze and dials it right up, a full sonic assault of feedback collides with a motoring beat and the bands signature duel vocals. Drawing influences from the likes of Jesus and Mary Chain, The Kills and mariachi bands, Muertos have a soft side which is shown throughout the album. But let’s be honest, Muertos is all about the fuzz, distortion and walls of noise. Gorgeous feedback mixes with the duelling vocals and add a welcome element to the layers upon layers of sound making them stand out amongst the current crop of emerging London bands.

All tracks recorded and mixed by Matty Moon and recorded at The Mother Lode and Halfton Studios. Debut album ‘Suck It Up’ out August 24th via Roadkill Records