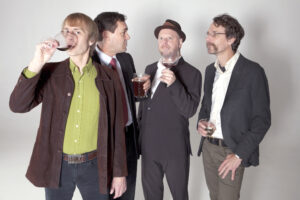 Legendary grungers Mudhoney take to the stage at the Birmingham Institute. Louder Than War’s Sophie Sparham reports back.

I never know what to write about this band because ‘they were brilliant’ does quite cover it. As Mark Arm leans forward to scream in your face, you know you’re part of something more than just a simple performance, you’re part of history.

However, I wouldn’t be doing my job properly if I didn’t comment about how wonderful the support bands were. Barton Carroll begins the evening with a passionate folk performance.

I loved watching this man, not only was he funny and bad ass on his acoustic guitar, but his lyrics were filled with emotion and moved me a lot more than I thought. Perfect opening act for the evening.

Wolf People were next to take to the stage. Playing gentle, alternative rock. I use the term “rock” extremely loosely because quite frankly, they fit into an unbelievable number of genres. Mixing beautiful folk styled harmonies, with avant-garde and proggy build ups, this band were like nothing I’d seen before in a while. Great gig guys.

It wasn’t long before Mudhoney stepped out onto the Birmingham stage and blasted into ‘Suck You Dry’. Apart from Mark’s haircut, after all these years, the band have lost nothing. Their playing was absolutely pristine and their energy was beautiful to watch.

The audience exploded. People of all ages, genders, races, dived into the pit, bonding to the same music the only way they knew how, the way that music fans have done for what seems like hundreds of years.

Mudhoney mixed it up, playing everything from their latest album, Vanishing Point (our review), to the classic Super Fuzz, Big Muff. They even mixed it up with a Fang cover, ‘The Money will Roll right in’, which was executed perfectly.

There are no crazy gimmicks, but there never have been. Mudhoney are all about the music, and on stage they looked like they were having a pretty damn good time.

After they were demanded back to the stage for an encore, the band finished with the brilliant In and Out of Grace, with a great improvved instrumental added for good measure.

As I left the venue, fans all around me couldn’t stop saying how awesome what they’d just witnessed had been.

Birmingham will be talking about last night for a long time.

Mudhoney can be found on their personal website: Mudhoneysite.com, Facebook. They seem to have two twitter’s, both of which have the blue tick of authenticity, @mudhoney and @_mudhoney.