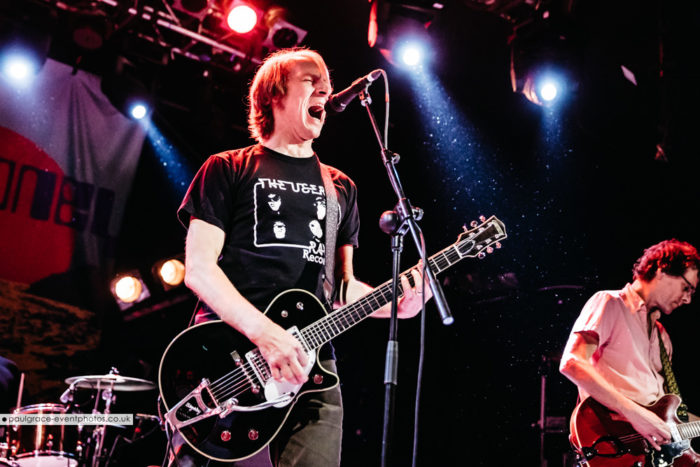 Mudhoney delivered no-nonsense rock ‘n’ roll to London’s Electric Ballroom. Louder Than War’s Andy Duke was there to take in the fuzz and it surprisingly got him thinking about Benjamin Button.

Have you ever been to a restaurant with loads of friends and ended up with food orders arriving at different times? In a similar way, this is how Mudhoney finish the majority of their songs at The Electric Ballroom. It’s a big KER-PLUNK. They’re not in total unison but, ultimately, it’s what happens in between the beats that keeps things interesting. This isn’t a slur on the band’s tightness but, rather, an illustration of how ‘in the moment’ the quartet are live. With each member feeling musical pushes and pulls in different ways, it’s not the ending of a track that matters but the journey in getting there that counts. And, despite playing together for three decades, there’s a collective adrenaline surge in their delivery that still sounds fresh and exciting. This is bullshit-free rock ‘n’ roll being passionately blasted by four fifty-something men who are clearly and infectiously loving every minute of it. As ‘I’m Now’, the 2012 documentary about the group illustrates – this is a band who don’t have to tour but hit the road for the love of it. And it shows. Freed from the confines of promotion, Mudhoney’s agenda is simple. It’s all about the gig and the experience rather than shifting units. 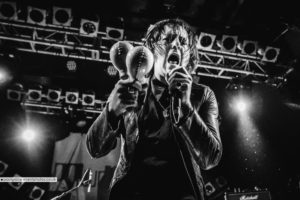 I arrive at the full to capacity venue just as the maracas-wielding Jim Jones is screaming out the final bars of Thee Hypnotics’ set. With Black Sabbath and Joe Jackson being piped through the PA as the crowd anxiously awaits the headliners, I scan the varied audience. From long-standing “veteran” fans in Sub Pop T-Shirts to teens who are recent recruits to grunge and respect the band’s links to Nirvana, there’s a shared reverence for Mudhoney’s history and legacy. As soon as the band kick off their set with Here Comes The Sickness, however, nostalgia gets a swift kick up the backside because the foursome aren’t rocking like it’s 1989. They’re much better now. The 2018 version of the group is tighter and more dynamic sounding than they were thirty years ago but, thankfully, not at the expense of ferocity. Dan Peters attacks his snare with such intensity that I question how much of it is even making its way into the sound system – it is that loud. An exceptionally distinctive drummer, he and Australian-born bassist Guy Maddison form a backbone who successfully fuse styles and grooves that transcend whatever the mainstream press defined as being grunge at its zenith. On Hey Neanderfuck, from the recently released Digital Garbage, the rhythm section recall Moon & Entwistle circa Who’s Next while Arm & Turner’s two-part harmony guitars deliver psychedelic riffs with a lashing of vintage funkiness. In addition to punk and classic rock, there’s definitely some metal influences in Maddison’s bass playing with nods to Iron Maiden’s Steve Harris and Black Sabbath’s Geezer Butler revealing themselves subtly through the set. 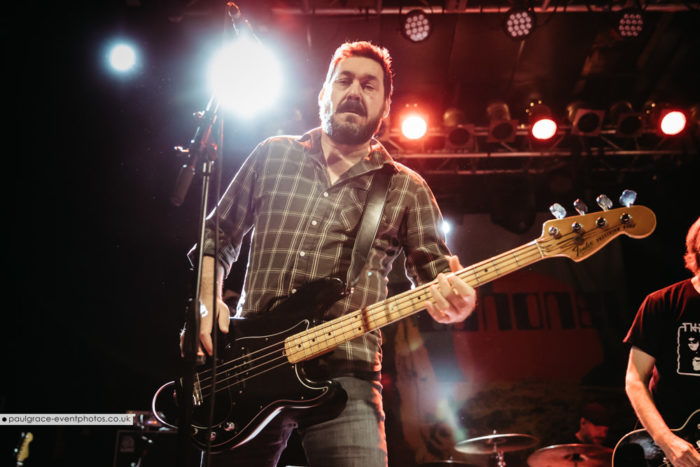 By the time they launch into You Got It, only four songs into the show, crowd surfing begins in earnest and is ever present for the duration of the performance. It was at this point that I noticed a unique phenomenon – the ‘Pogo-grapher’. While the sight of smartphone cameras being brandished by audience members to capture the moment is commonplace, seeing mosh pit participants taking photos while pogoing is new to me. Thanks to fast autofocus facilities on today’s phone cameras, it’s now possible to slam your body into a fellow fan while simultaneously emulating the work of the famous live band snapper Charles Peterson. Multitasking for the win.

The band’s 30-song set spans Mudhoney’s nine-album career with new tracks from Digital Garbage being spaced out accordingly. There are no lulls, gaps and banter is minimal. Their generous seven-song encore contains nods to their influences with covers of Hate The Police by The Dicks and Black Flag’s Fix Me alongside the crowd favourite Sweet Young Thing (Ain’t Sweet No More). 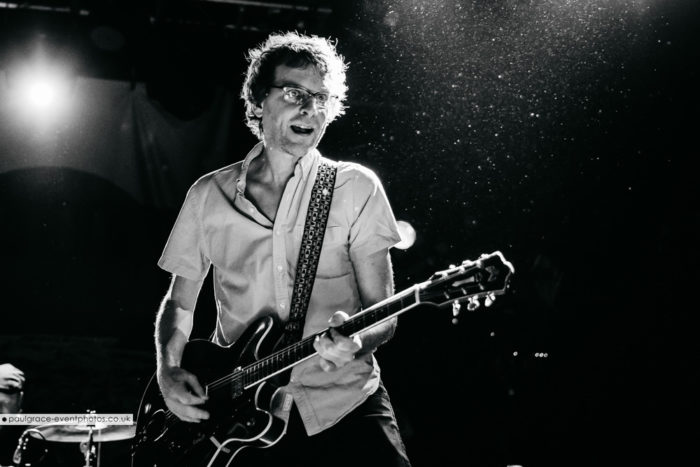 Despite Steve Turner’s early intention to be anti-guitar solo during the band’s early days, he’s not adverse to some impressive fret frottaging on his vintage red Yamaha double cutaway guitar. His outro solo on If I Think, from the group’s debut album, takes on a far more epic guise live than on recording. He’s definitely comfortable embracing his inner guitar hero these days and there’s noodling aplenty on the band’s latest offering. The live interpretation of Next Mass Extinction, for instance, showcases a solo from Turner that the late Jerry Garcia would happily have given his last tab of acid for. 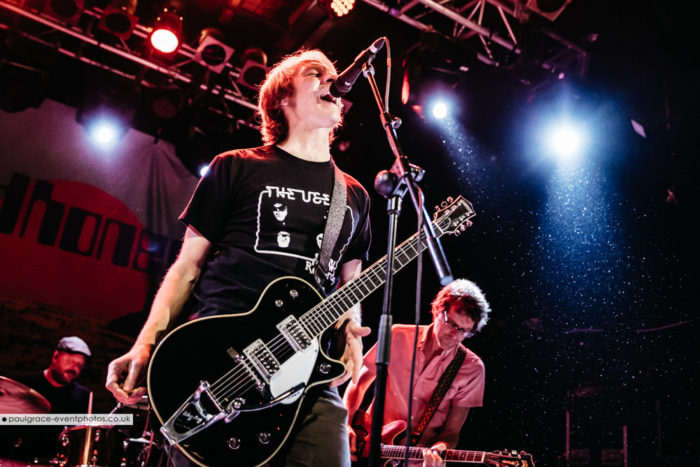 Holding it all together is Mark Arm. His vocals cut through the dense mix with effortless ease and remain a powerful and unflappable force for the entirety of the gig. With the exception of Frank Black, there’s no other singer that can blast scream-infused melodies with such vigour without fatigue. The Californian-born singer is also a fantastic guitarist and his chemistry with Turner is an important sonic foundation of the band. Arm’s approach to slide guitar on JRRT and No One Has is unique and his catchy percussive use of the Bigsby Whammmy Bar on Fearless Doctor Killers made this reviewer do a spot of unlikely air guitar. And, for those tracks where he eschews the six string altogether, Arm is truly in his element as a frontman. With his swaying hips and slightly camp movements, there’s an air of 1970s-era Jagger in his presentation – until he starts singing that is. And, while looking at the 56-year old cavorting around the stage like a possessed frat boy, it struck me that Arm actually looks younger now than he did at the height of Mudhoney’s popularity. Leaving his addictions behind and being healthy in both mind and body are clearly working wonders for the singer. Either that or, like ‘The Curious Case of Benjamin Button’, this musical legend is simply ageing in reverse. Touch Me I’m Sick? No, Touch Me I’m Healthy & Eternally Youthful.