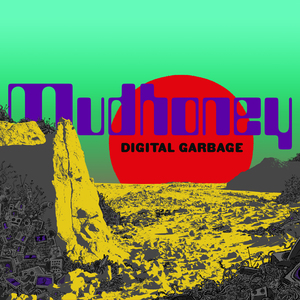 Sub Pop release the tenth studio album from legendary Seattle outfit Mudhoney, it finds them in angry mood as they try to make sense of some ‘dark times’…

Mudhoney are not happy. In fact, they are seething. Seething and baffled. Disconcerted by the turmoil, wondering at the state of things, they can’t quite make sense of the world of Digital Garbage. Witty and stark, they have made another uncompromising record.  With the band’s trademark unpolished DIY feel, this is both a soundtrack and statement on the times.  Listening to Digital Garbage is to join Mudhoney in their bewilderment at the detritus of hyper-mediated modern life. John Lydon once sang that anger is an energy, there is plenty of evidence of that here. Mudhoney may have been going for three decades but they still have some sting.

Early on in the 2012 feature-length Mudhoney documentary film I’m Now, guitarist Steve Turner half-jokes that if they lost their audience, if it all went wrong, they would still get together and play songs in the basement. You can see he means it. Mudhoney make music like they have that plan as a backup option. Playful and pointed, without pretensions and without, it would seem, the will for a bigger audience, they are making music that defies the whims and fashions of a fickle industry.

Given their anti-commercial ethos, it’s maybe a surprise that Mudhoney have got as far as making a 10th studio album – plus a couple of live albums – over the last 30 years. Yet they have endured, and with good reason. They are, of course, forever associated with being instigators of the grunge movement, but they continue to set their own terms and their music has a raw punk quality that is relevant well-beyond that famous moment. The eleven tracks comprising Digital Garbage are not about nostalgia, they are beating against the walls of the modern world.

Turner’s buzzing riffs remain at the centre of the band’s sound. He still handles them like a hot potato – never wanting to grip them for too long and always keeping them on the move. With those Riffs as an anchor, the band have always had more sonic diversity than it might first appear, pushing things further this album tests a number of different combinations of crunching sounds. The rolling bass line that opens the album is an indicator of the way its tracks unfold. Dan Peter’s drumming has always been distinctive and Guy Maddison’s bass lines – he has now been with the band since the early 2000s – find a new confidence and prominence here. As well as the bass propelling the opening of Nerve Attack, the later song Night and Fog places the rhythm section at centre stage. Elsewhere, the organ work on the single Kill Yourself Live carries the song along, stretching through the relatively lengthy intro (by Mudhoney’s standards) on what is perhaps the most instant and melodic track on the album. Then, of course, Mark Arm’s raw vocal’s are rich with intent as they rip through the music. This album sees his mocking and cynical lyrics finding plenty of targets and the delivery has as much urgency as ever. On Digital Garbage these things are amplified, it is like he knows that these lyrics have purpose and he sings them with real edge. “Look what they are doing in my name”, Arm demands on Messiah’s Lament.

There is a Stooges flavour that runs through much of what Mudhoney do, and this is still evident here, yet it doesn’t restrict the sound. Rather it is like they work off that blueprint, it gives them a shared foundation but leaves plenty of scope to explore and to create. It is more of a well-spring for their music rather than a fence. And, of course, the punk spirit remains in what they do, there is a DIY and unpolished feel to the sound that Mudhoney have always held onto.

The eleven tracks pulse along at a fair rate. Nerve Attack, a punchy opener, sets the scene with the lyric talking of the nervous exhaustion and sensory overload that comes with the constant connections of mediated experience. The first single Paranoid Core, a song that sits comfortably alongside the best Mudhoney have written, continues that theme, adding uncertainty and pathological self-reflection into the mix. The album’s themes roam but it’s tracks are pinned together by a shared sentiment that echoes all the way through to the short and stocky final track Oh Yeah – a more positive closing song about escapism that seems to end just as it’s getting started. Moving through the tracks, the album’s coherence of sound and lyrical themes is striking. It is an album of fears: a fear in what is happening and a fear of what might yet come. Its sonic properties are a fitting backdrop to the disconcerting and disorientating times. Anchored in these fears, the album moves through vast and ranging topics, from the misuse of religion, to wealth inequality, mass extinction and environmental catastrophe to visions of gunmen, terrorism, the malevolent forces of political corruption and the extremes people will go to to get ‘likes’. There are many more small side-tracks tucked away in the reference points layered into the album. Sometimes specific and more often alluding to some general trend or other, it’s an album littered with half-recognisable news stories, ironic backbites and barbed observations on our media orientated life.

Mudhoney don’t hold back. Digital Garbage finds them wound up and spinning. It’s an album of cutting lyrics and sharpened riffs. This may be a band who have been around for some time but this is a long-player that is tuned into the moment.

More information about Mudhoney can be found on the Sub Pop website and they are also on Twitter.

Review by David Beer. More information about his writing can be found on his website, he is also on Twitter.