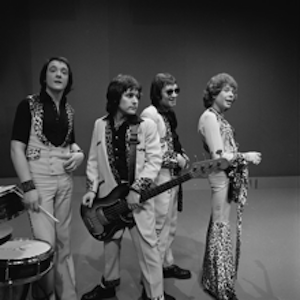 Mud are typical of this- often derided as not being ‘cool’ and are ceremoniously dumped as the outsiders of glam rock.

Of course they were older than many of their contemporaries having been around the block a few times since their first single release in 1967 and their name was hardly as clever or poetic as ‘Trex’ plus they were certainly no pinups but, as is so often the case, in pop music – some of the best stuff lurks in the most unlikely places.

It’s hard to credit it now- especially with the severely edited history of the period but in the mid seventies Mud were one of the biggest selling singles bands in the UK – teaming up with the genius Chinn Chapman songwriting team in 1973 their future was assured and they were catapulted into an unlikely teen single market with a machine gun of great hits that peppered the pre punk high water mark of glam rock.

Dressing as ersatz teddy boys with added glam trinkets they had a certain beer n fags cool about them and they could really play. The songs were far more complex than they were letting on and Les Gray was a great frontman who had a natural ability and a great voice that veered from night club crooner to Elvis baritone to pure rock n roll.

The band were never going to be critics faves but they left behind some brilliant singles that, if they were released by other more iconic media faves, would be considered classics of the period by the snobs.

There is plenty of their hits in this list but also some of their earlier releases that never hit the charts but possess a certain charm to them. My band The Membranes once had the pleasure of playing a really bizarre festival in Rochdale in 1985 headlined by Les Grey’s Mud- it was Les plus backing band but it was still a pleasure to hear those songs live- he was total gent as well.

It has to be number one in the list it has everything that was great about Mud in one song- coming out at the height of Mud mania and number one for several weeks it had the shuffle beat with added glam stomp, Les Greys good time yet powerfully great voice. Tiger Feet was a deceptively simple song with a thrilling chorus and the complete lack of boring cool- and yet it was a classic slice of rock n roll. The chorus was the sound of 1974- a great piece of nonsense pop that really lifted- when it got to number one it felt like a deranged victory for rock n roll.

Possibly their best? the single is their first top ten hit reaching number 4 in 1973. The delicious churning guitar at the intro was about as heavy as it got in the early seventies pop world and this is a great slice of British seventies rock n roll – written by Chinn Chapamn for Sweet and turned down by the band Mud took the song and made it their own- it’s got a really great chorus and the classic glam stomping beat and some really great guitar work- a perfect mid seventies UK pop single.

I can remember clearly this coming out – it was the first we heard of the band but a quick check through old music papers turned up a half page spice on this band slogging around the UK in the back of a van playing deadwood gigs and looking for the big break. When the break arrived with Crazy and Chinn Champman’s songwriting touc the band ran with it This is the pre teddy boy mud- dressed in night club twenties gangster style they look very much like a 1972 band- there is a touch of glam to their look with Les with his smudged eye liner looking like an oddly sexy nightclub bouncer- or about as sexy as the band could- like cold fish and chips. The song is great – slipping and sliding around some sort of eastern fold stomp with a gypsy kiss stomp to it – there is a touch of Slade and their iconic Cos I Love You’s to the track and Les has an echo of the great Noddy Holder to his vocal but it’s far away enough to put Mud on the map.

Mud were in their prime when this came out and the Chinn Champam stompers were their calling card- this is a great slice of Elvis fused British seventies rock n roll. I know its far hipper to call someone like Can the sound of the seventies in this period and we do love Can but this kind of primal rock n roll that Mud were dealing out was fantastic. The Elvis in Vegas end of pier croon is very much part of the band shtick here but there’s also that whiff of beer and fags British club circuit to the sound and that great stomping slapback drum back beat and the churning guitars dealt out by the rather camp looking Rob Davis – the band’s guitarist who would turn up again in the last decade co-writing many pop hits. Arguably the first hard rock/mtal record that a new generation of teeny rock fans bought – could this have teen the doorway to AC/DC and even punk a couple of years later for the 12/13 year olds? The song also features great guitar solo- Mud could really play.

Part 2 of the top ten songs from mud is HERE.