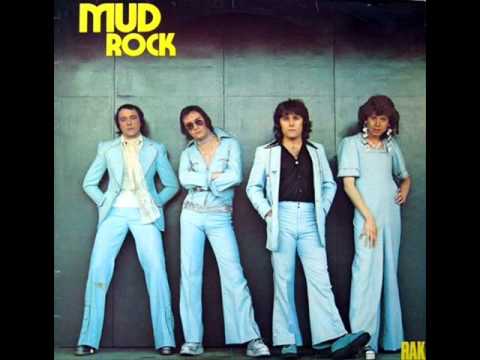 Mud’s second hit after the breakthrough of Crazy is an almost mystical experience.
Great spooky, spectral backing vocals add to the songs off kilter pop feel – the song is the last before their series of glam stompers and was a number 16 hit- I can remember being sat by the radio wiling this single up the charts in those days when that kind of thing really mattered! There is so much imagination crammed into the vocal arrangement of this single that is far belies their image of being pub rock chancres- a great slice of big sounding spooked rock n roll and another hit.

Before all the hits there was the hard working Mud- just another flotsam and jetsam group in pop culture trying to find the break. In 1967 they released their first single, Flower Power, a truly fab piece of psychedelic pop which is the great lost psyche single from the summer of love with its exquisite and brilliantly beautiful harmonies. This is a piece of long lost psych pop that was bafflingly not an hit at the time. It’s worth looking at the youtube clip just to see their young faces peering from the single sleeve and the song is oddly reminiscent of Captain Sensible’s more tripped out work with the Damned and a song that truly derives to be dug out again from the long lost vaults.

Jumping Jehosaphat is from 1970 and still finds Mud trying to find the right formulae- a great piece of brassy pop- it’s somewhat reminiscent of a Pulp album track and asks questions over just what is classed as ‘good’ and ‘bad’ in pop culture and why Mud are dismissed and Pulp are venerated when at points in their respective musical journeys, decades apart, they were treading in the same areas. It also features yet another great vocal from Les.

While we are here we should have a listen to their 1968 single, Up The Airy Mountain, a good slice of slightly tripped out sixties pop and another flop single – the curiosity value is that the band were called ‘The Mud’ for this release.

Keeping on the pressure after Tiger Feet had dominated the charts at number one, the Cat Crept In, was another classic glam stomper that reached number 2 weeks after Tiger Feet. Mud may not have been cool but they genuinely looked like they were having a great time and this song and video captures this. At this point of time they were perfectly balanced between their glam rock stompers and Elvis period- the Elvis period that would see their huge xmas hit Lonely This Christmas and other big number one Oh Boy.

From the 1975 Elvis ballad period this is part of the second half of the Mud success story- gone is the glam stomp replaced by a whiff of Vegas- or Blackpool – and that’s no bad thing.

The 1974 hit machine Mud got to number 6 with Rocket which saw them fully immersed in the Elvis in Vegas period sartorially and musically but with enough of the glam rock noise and stomp to still appeal to the spotty teens in the UK whose youth was soundtracked by suppressed violence and flash of glam. The song has great stop/starts in it were Les does his full Elvis thing ….’second verse…’ after this it was a big style change and huge xmas number ones and then punk arrived and they struggled on- finally time had caught up with them but what an unlikely ride…

Part one of top 10 great songs from mud is HERE.