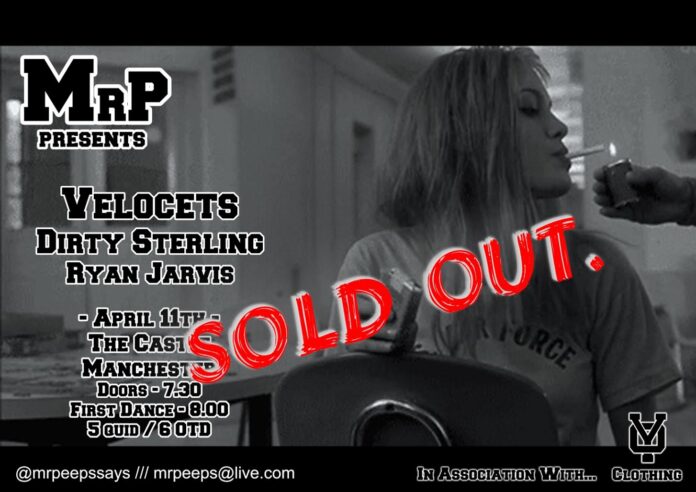 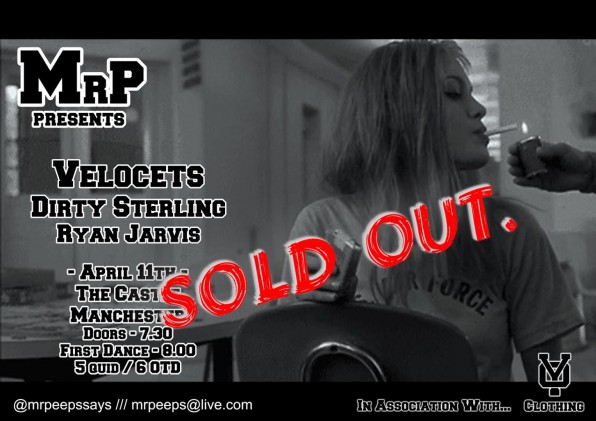 Mr Peeps is well known around Manchester as someone who, through his podcasts, radio shows and live-events, supports and promotes the city’s finest new artists. With his latest “live unsigned act” undertaking looking to be his best and most popular ever (the first 2 nights have already sold out) Carl Stanley caught up with the man himself to find out more.

Titled “MrP Presents”, the new unsigned nights, which will be staged at The Castle on Oldham Street, see Mr Peeps team up with Manchester brand YO, Your-Own: Clothing. They open up their first night with Velocets, Dirty Sterling and Ryan Jarvis, but like we said, sadly tickets have already been snapped up – as they have for the following event on May 9th, which features No Hot Ashes, The Barmines and Larkins.

It already looks like these new events are shaping up as one of Manchester’s best ways to catch exciting new acts from all around the UK so Louder Than War caught up with Mr Peeps to get his thoughts on Manchester music now, new groups and his new monthly unsigned nights.

Hi Mr Peeps, thanks for talking to Louder Than War … what are you up to right now at this moment?

Mr Peeps: Alright. how’s it going. I’m very busy at the moment, with the gigs at The Castle in association with Y.O. clothing, my show on FabRadio promoting the very best in the unsigned music. I also have a new Podcast getting ready for release in both band and Acoustic versions. And I’ve just started working with Blackthorn Festival helping to promote this years event which happens in July and is just 20 minutes out of Manchester in Marple. So all’s good at the moment.

Your Manchester band nights have built quite a rep for staging some great new and unsigned acts, what is it that makes a good unsigned night?

I think the key elements to making the nights a success is having bands on the line-up that compliment each other in some way. Also the nights don’t have the gig and go culture, where bands play and get off as soon as they’ve finished, mainly I think it’s because of the strong line-ups and the great feel in the room on the nights. 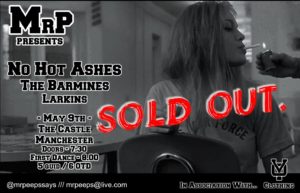 You’re about to start a new unsigned band / artists night in Manchester aren’t you, can you tell us more?

The first 2 dates are April 11th and May 9th and as we speak have now sold out. On this series of gigs we are picking some of the best local bands and combining them with one quality out of town band, which has worked well and gone some way to selling the gigs out. As it works both ways the Manchester crowd get to see a great new band and the band get to play on a Top Manchester line-up.

Is this a collaborative event with Tracey and Chris from Your Own clothing?

We have just started a run of dates at The Castle on Oldham Street in association with Y.O. Clothing, which is great to get the backing of a Top Manchester Brand who are really into their music.

And to be honest there’s always been a great connection between Music / clothing and Tracey and Chris have stepped up to offer their support for the nights which is great.

Who are the groups / artists which will be opening up the first event?

On April 11th we have Velocets and Ryan Jarvis from Manchester combined with Dirty Sterling from Scunthorpe.

May 9th sees No Hot Ashes and Larkins from Manchester put together with The Barmines who are from Leeds.

You also review shows, make podcasts and do the radio too, what are your own thoughts on the new music scene today and Manchester’s upcoming groups and artists about at the moment?

I would like to think the Manchester music scene is on the UP at the moment, with bands like Blossoms getting some recognition and moving to the next level. And with ex Janice Graham front man Joe Jones out and about with his new project White Boy and No Hot Ashes bringing some indie funk to Manchester. Also keep one of your eyes on these bands, The Tapestry, Jordan Allen, Ist Ist, Gramotones, Findlay, The Backhanders, Velocets … and the future looks bright.

Mr Peeps website is here: mrpeepssays.co.uk. You can find his Podcasts on Soundcloud and he tweets as @MrPeepsSays.