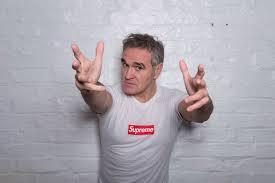 Controversial, outspoken and armed with opinions Morrissey has thrown his proverbial hat in the ring for the London mayoral elections on May 5th.

The Animal Welfare Society has asked the singer to stand for their party in the election to see who succeeds Boris Johnson and is said to be “seriously considering” the move.

Moz reportedly posted a statement on a fan website, True to You, outlining his animal welfare platform.

“Animal welfare groups cannot persist simply in order to continue to persist,” he was quoted as saying.

“There must be a governmental voice against the hellish and archaic social injustice allotted to animals in the United Kingdom simply because those animals do not speak English, otherwise millions of very caring citizens are greatly concerned about issues that no one is able to do anything about.”

Morrissey would need to collect 330 signatures – 10 from each London borough – to enter the contest.

He could then take on the likes of Labour candidate Sadiq Khan and Tory rival Zac Goldsmith in the battle for City Hall.

Animal Welfare Party leader Vanessa Hudson told the Sun: “I can confirm we have asked Morrissey to consider standing as a candidate in the election.”