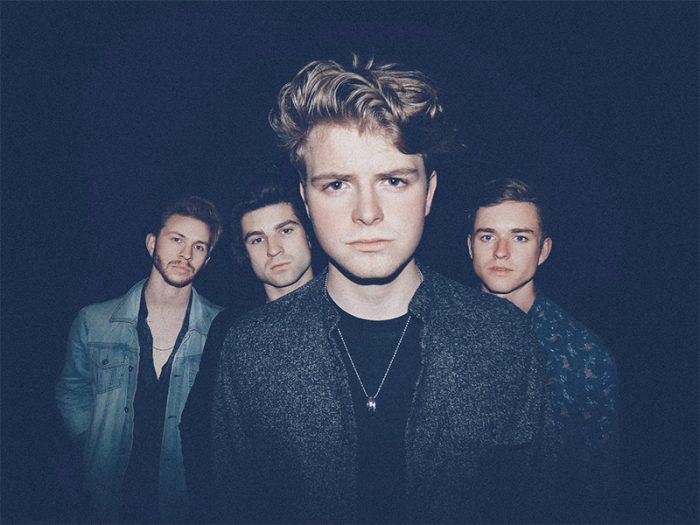 Louder than War have a listen to Mowbeck’s latest release and also have a quick chat with them.

The band have a slot on the BBC Introducing Stage at 2016 Reading & Leeds Festival under their belt and it’s quite deserved. The track starts with gentle keyboards and measured vocals. Guitars and drums quietly come in to drive the track. The momentum quickly speeds up to a powerful noisy verse and this four pieces’ knack for a tune is very evident.

But what is equally evident is the scope and sound that this band produces. The production and the quality of the instrumentation and the crystal clear vocals of lead singer Andrew Thomas. Just great.

LTW: Hi guys! Where are you? What are you doing right now?

Mowbeck: Hello! We’re currently sat in the studio doing a lot of writing for our next release and we’ve got a few shows coming up as well in a few places we haven’t been before. We’ve had a busy few months with travelling and shows, it’s great to get back creating again.

LTW: Vaseline is from your ‘Talkabout’ EP. You’ve had some nice radio airplay. What has the reaction to your output been like so far?

Mowbeck: I think a lot of people were quite surprised with the direction we started to go in with this release. The first music we put out had always been very pop and easy listening so when we dropped the video for Vaseline I think it turned a few heads a little bit. We’ve been grafting hard to release a song that really hits people and the reaction to this song has achieved that which has been really cool.

LTW: And your slots at Reading/Leeds? That must have been awesome.

Mowbeck: It was our first major festival and the one that we’ve all being going to since we were kids so to have that opportunity was pretty awesome. The people you meet at festivals are so lovely as well. We genuinely had one of the best weekends of our lives.

LTW: What are you musical/cultural influences? And how was growing up in Nottingham?

Mowbeck: I first got into music back when music channels was the only real way to find out about new mainstream music. I used to be glued to the TV when I was young waiting to find my new favourite band. That has changed recently obviously, because of social media and the internet so it’s so much easier to discover new music and use it as an influence for our writing. We generally write about our own experiences and things that affect us so usually if one of us has had a break up or fall out recently we know some good material will be coming out shortly… haha.

As a city, Nottingham is great. There is such a great vibe about the music scene here as well and all the artists are really supportive to each other. I can imagine living in London would be quite different because of the shear amount of people trying to all do the same thing, so it’s great to live somewhere that we’ve all got to know and love so much.

Mowbeck: I think the general public has become a lot more aware of the issues that the world is facing in 2016 and unfortunately there’s a lot of issues that artists and writers can’t really speak about in their work as much as they used to incase it offends people or isn’t politically correct. I do however have a genuine belief that all of this is making the music industry stronger as people are looking for an escape from the real world a bit more. When you wake up everyday to another terrorist attack, or another Hitler-esque politician rising into potential power then sometimes naturally people look for a distraction or escape, which is where music and art comes into play.

Mowbeck: Sure. We didn’t want to play it safe with this one. There are a lot of bands releasing great music and great videos so for us, we needed to convey the raw emotion of the track visually too. We didn’t really want to freak anyone out with the video or for people to think what we had released was inappropriate but sometimes it’s difficult to tell the emotion of a song from a polished recording so we wanted to push the boundaries as much as we possibly could. We were lucky enough to work with a really talented director called George Maguire who had such unique, out of the box ideas for the Vaseline video and we’re really happy with the outcome.

LTW: So after this single, what are the recording plans for Mowbeck?

Mowbeck: We’re demoing a whole album so we can cherry pick the best tracks and put them out at the start of next year some time. Our mentality has always been that we need to better anything we’ve done before; so although we love what we created with Vaseline, whatever we put out next needs to be a step above that.

LTW: And live? Any festival slots booked for 2017?

Mowbeck: We’ve got some dates booked around the UK this Autumn which we’re really excited about because we’re playing a new set and haven’t done many shows since our Reading & Leeds appearance. We can’t say anything as of yet festival wise but hopefully we’ll be jumping on some line-ups for next summer. Festivals are such a great way of getting your music out to ears that will never have heard your sound before and festivals have such a great vibe about them.

More dates to be announced soon.