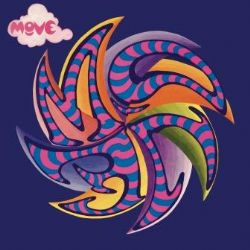 Deluxe reissues of the first two albums by one of the most sadly overlooked but best bands of 60s. Ian Canty stops by to hear the grass grow…..

It’s difficult to see quite work out just why the Move aren’t remembered with the affection they no doubt deserve, while lesser acts of similar vintage grab all the plaudits. Ok, they arrived pretty late on the scene in 1966, were looked down on by the Psychedelic trendsetters as being a pop act cashing in on the scene, had a constantly fluctuating personnel plus Roy Wood’s subsequent career as a glam Phil Spector in Wizzard and his and Bev Bevan’s involvement in the Electric Light Orchestra may have lost them some credibility points. But they were a fine, fiery outfit with a built in genius songwriter in young Roy and the most explosive drummer outside Keith Moon in Bevan. Lead singer Carl Wayne could make all sorts of material work whilst all the other members of the band had decent voices too, which would be handy in the Move as they never,ever stood still.

Forming as a kind of a Brummie supergroup the three mentioned above were pulled by Trevor Burton and cool cat Ace “The Face” Kefford on bass at complete their original line up (the sleeve-notes reveal a young David Bowie had a hand in their formation, which is yet another point in his favour). Hooking up with proto-Malcolm McClaren Tony Secunda, he initially decked the Move out in gangster suits, cooked up many publicity stunts and encouraged the band in an auto-destructive stage act that out-did the Who for sheer violence. Television sets and cars all perished at the hand of Carl Wayne’s trusty axe (not a guitar!) as the early Move sound shifted between violent Freakbeat, stately Psych-Pop and their Rock n Soul roots.

They were quickly snapped up by Deram and the “Night Of Fear” single was a huge success in December of 66. After another couple of big hits with “I Can Hear The Grass Grow” (famously covered by the Fall) and “Flowers In The Rain” (first actual record played on Radio 1), they put out their self-titled debut LP in the early Spring of 68 which is the first offering here.

Clad in a sleeve by trippy Dutch design outfit the Fool, we have the original mono versions of the album itself plus oodles of bonus tracks on the first CDs the second one being stereo takes, while the last disc is classic BBC Sessions from the likes of “Saturday Club” and “Top Gear” radio shows. That the original album itself is a bit of a mish-mash was only to be expected, with it being recorded piecemeal over the previous 12 months. It found the band caught between the Kinksy power pop of “Useless Information”, harking back to their rocking days with the covers of “Weekend” and the jokey “Zings Went The Strings” and the majestic psych pop of their third and fourth hit singles (“Fire Brigade” preceded the album the previous February). Even though their influences mainly came from the US, here the band they most resemble is the Who at the time of the “Sell Out” LP. The platter ends with the notoriously fudged mix of “Cherry Blossom Clinic”, but not to worry as there is a superior stereo version on disc 2 and they would return to the source on the follow up album “Shazam”.

The bonus tracks on this disc are a delight: a rare acetate from January 1966 of their projected first single, the garage “Is It True” (along with two more gentle tracks recorded on acetate with it), five songs from a Birmingham local radio show cut at around the same time and both side of the first two singles along with the shelved (due to the storm Secunda had whipped up with the “Flowers In the Rain” “Harold Wilson” promo postcard) “Vote For Me”.

Disc two presents stereo takes of the LP tracks and accompanying singles, plus some alternate takes one of which is a much more pleasing version of “Cherry Blossom Clinic”. A lovely piano led version of “Fire Brigade” is a high spot. There next follows a third disc of typically wonderful BBC Sessions, with great interview segments conducted by the ageless Brian Matthews and less adorned, cleaner but no less propulsive versions of their best tracks of the era. A thrilling take of “I Can Hear The Grass Grow” is probably my favourite but it’s stuffed with delights. Covers of the Byrds “So You Want To Be A Rock ‘n’ Roll Star” and Love’s “Stephanie Knows Who” show that the Move weren’t quite the Psychedelic opportunists they were sometimes made out to be, they had their ear to the ground for cool sounds coming from the US before most trendies in the UK. Altogether it presents an excellent and comprehensive document of the Move’s early years and this is complimented by a well presented booklet which tells the story of the band from formation to the LP’s aftermath (Also a poster with press cuttings of the times and archive photos is included).

During the recording of the album Ace Kefford left the band as his drug use spiralled out of control and guitarist Trevor Burton took over on bass. In the run up to their second LP they would go through all kinds of highs and lows under more hard-headed management as Don Arden took over from the maverick Secunda. Internal conflicts raged in the band as they sought to distance themselves from the more pop element, an impossible task when such an excellent song-smith as Wood on board. As a result their run of hit singles ground to a halt for a time as the more rocky “Wild Tiger Woman” disappeared without trace (Previously the five track “live” EP “Something Else” had failed to chart too).

The Move’s sure pop touch returned with the massive number one hit “Blackberry Way”, but this had the negative effect as well, with Trevor Burton leaving as he was not happy with the commercial approach. By the time of the next single “Curly” he had been replaced by Rick Price who was fresh from the cabaret scene and found himself straight back there with his new band as Arden looked to maximise the Move’s earning potential by supplementing their normal gigs with club-land dates. A US tour in 69 playing a lot of the tracks from the upcoming LP and stretching them out to lengthy jams showed the group were moving towards a harder and more “progressive” approach. 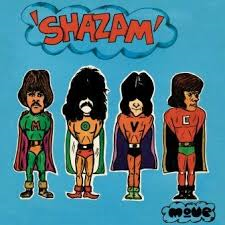 The second LP didn’t arrive until the start of the new decade and “Shazam” showed evidence of Wood’s writer’s block, being that it consisted of 3 originals on the a side plus 3 covers on the flip. They songs are lengthy as well and Carl Wayne himself admitted that this was more or less because they had run out of ideas. But everyone did that kind of thing at the time anyway and “Shazam” is a much more cohesive LP than the debut (not that there was anything wrong with that, it was after all a collection of dynamic tracks and very pleasing it was too) and it’s very enjoyable, with “sound collage” elements on side 2 with Carl being recorded direct from Great Portland Street. “Hello Susie” certainly is a dynamic start and “Cherry Blossom Clinic Revisted” easily trumped the original. On the covers they really do excel and the Move really were fine interpreters of a song as evidenced by the great “Don’t Make My Baby Blue”. “Shazam” treads a tricky path in 1970 between the pop and progressive and manages to achieve excellence at both. It’s a coming of age as they proved themselves a fine rocking outfit and certainly not a novelty bunch of Psych chancers.

This reissue includes the brilliant singles of that era and has a second disc with some wonderful unreleased BBC sessions recorded in 68 and 69 (a wonderfully sung and truly excellent version of the Nazz’s “Open My Eyes” show how far ahead of the game the Move were and ends fittingly with Brian Matthews saying “beautiful”). “Move” and “Shazam” have both been given the treatment they deserve by Cherry Red’s Esoteric imprint, never has a band in such a constant state of flux sounded so good!