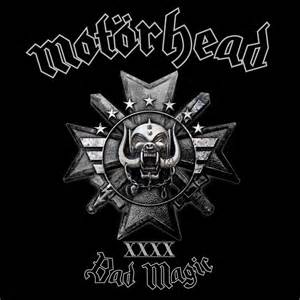 Another year, another Motorhead album? Well, yes, and the second in a row that’s blighted by concerns over Lemmy’s health. These are well-documented by now; another show stopped early in Texas yesterday, following on from altitude-related illness. I have really mixed feelings about it; I always look forward to a new Motorhead album. People always claim their best songs are already written, but they underestimate the band, Phil Campbell in particular. On the other hand, I wish the band would take a proper break, take Lem to one side and say “O.K, enough bravado now; look after yourself”. We all know he’s a legend, but it’s time to leave the lifestyle clichés behind. Lemmy is more than that.

The good news is that ‘Bad Magic’ starts with a strong song; ‘Victory Or Die’. This was ‘Aftershock’s mistake; a great album marred by a duff opening track. Things remain on form for the first four tracks, ‘Thunder And Lightning’ is a corker of a riff, ‘Fire Storm Hotel’ and ‘Shoot Out All Of Your Lights’ have the requisite ingredients that you know and love. However, there are two songs (three if you include the cover of ‘Sympathy For The Devil’) that the album would be stronger without. ‘The Devil’ sounds like padding as does ‘Choking On Your Screams’, nothing to make them stand out. I’d prefer a shorter, stronger album, personally.

And the rest is strong stuff. ‘Electricity’ is a straight-ahead rocker and ‘Evil Eye’ kicks up a storm. Regular producer Cameron Webb has given them a rougher edge, seemingly from the band writing in the studio, on the hoof, rather than bringing in complete, rehearsed songs. It suits them and Lemmy’s increasingly ‘characterful’ voice; damaged but unbowed. They can clearly still make magic in the studio. ‘Teach Them How To Bleed’ starts with that bass sound, oft imitated but never bettered, ‘Til The End’ is slow, reflective and moving. Not everyone likes it when Motorhead slow things down but, for me, they’re often very good songs, like here. Similar to the classic ‘Don’t Let Daddy Kiss Me’.

It ends well, cover version notwithstanding, with ‘When The Sky Comes Looking For You’. The band sound like they know how good it is. Yes, against the odds, and at a time in their career when the average band phone it in, Motorhead have produced a solid, at times thrilling album. Given the media circus and ongoing issues, this is a big surprise and a big relief. A bigger one still would be if Lemmy put his health first, took a break and came back stronger and louder. We know you can do it.

Words by Martin Haslam. More from Martin can be found at his Louder Than War Author Archive.